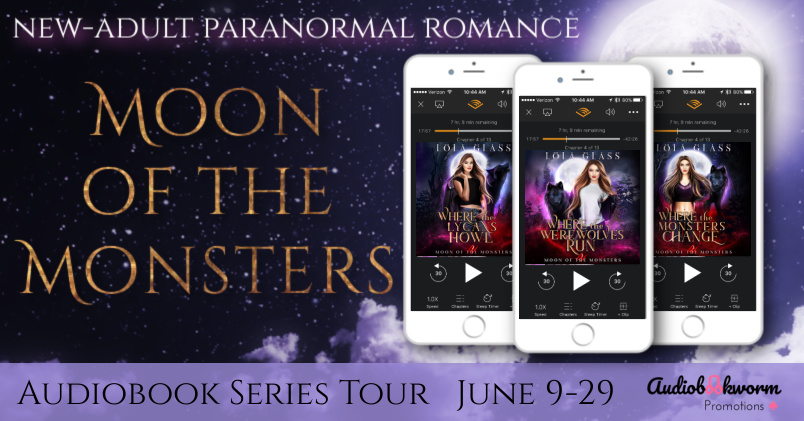 Title: Where the Lycans Howl

Series: Moon of the Monsters, Book 2

We thought we were alone.

Lyka Bay was supposed to be the only town of lycans.

After the wolf I thought was wild shifts into a teenage boy, he leads me and Keaton to another town of half-cured lycans, and we’re exposed to a whole new world.

We thought the lycans were monsters…but there’s something worse.

And if we can’t figure out how to cure them, there’s a good chance they’ll kill us.

Note: Recommended for listeners ages 17+ due to language and sexual content.

Hi, I’m Lola! I’m a book lover with a *slight* werewolf obsession and a massive book addiction. I read a ton, write a ton, and have an unhealthy relationship with both Red Bull and chocolate. My books are always about new-adult characters, and I love putting twists on common romance tropes!

Avie is an audiobook narrator living in her off-grid tiny house in rural Eastern Canada, surrounded by forest and chicken friends, and honeybees. She loves books so much she’s listening to one almost every minute she’s not narrating one (she also narrates as Aven Shore). She narrates live on Discord with other romance narrators on the Haven server. She is longing to travel and hike in mountains again, and dreaming of sleep in the lava fields of Iceland under Northern lights again, her favorite place in the world. Her past lives include being a carpenter, firefighter, tax accountant, and competitive snowboarder.

2 Replies to “Audio Spotlight & Excerpt: Where the Lycans Howl, by Lola Glass”