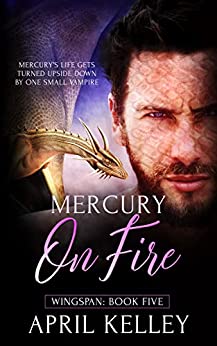 Don’t mess with the dragon shifter sheriff’s mate. He bites.

Mercury is content with life. He loves being sheriff. He loves his clan. And he loves his sleepy, small town. When Wingspan turns into a refuge for a group of trafficked vampires, Mercury has mixed feelings about whether they should become permanent residents, and he’s not the only one. Several folks want the vampires out of their town, but some want to do it by any means necessary, even if that means resorting to violence.

And then one day he gets called out to break up a fight between a vampire and two dragon shifters. Discovering the vampire is his fated mate, he has to make a choice: Fight for Wingspan or fight for his mate.

From the author of the Rainbow Awards honorably mentioned, The Journey of Jimini Renn and the Saint Lakes Series comes book five in the Wingspan Series. The book features a grumpy older dragon shifter sheriff with a heart of gold and a traumatized, small vampire who can kick some serious butt when necessary.

“That’s not true.” But that was the consensus of the clan meeting the other day. That was the message the Havilar boys sent by attacking Eldon. And that was what had Mercury questioning the mating.

Eldon had received the message and had an appropriate reaction to it.
Mercury could argue the point, but he would be wrong to do so. “The conversation didn’t go the way I wanted it to.”

“I’m sure it didn’t. You expected me to fall at your feet and beg? Or was it gratitude for the scraps of attention you’re willing to give? I might be young compared to you. Compared to a lot of paranormals. But I’ve been on my own my whole life. I know how to survive. Even in Wingspan. And even you.”

As good as Mercury was at reading people, he missed the mark on Eldon. That was the heart of the issue. “I phrased things wrong. That’s what I’m saying.”

Eldon shrugged as if to say Mercury had said what he said. He couldn’t take back the words.

About the Author
April Kelley writes LGBTQ+ Romance. Her works include The Journey of Jimini Renn, a Rainbow Awards finalist, Whispers of Home, the Saint Lakes series, and over thirty more. Since writing her first story at ten, the characters in her head still won’t stop telling their stories. If April isn’t reading or writing, you can find her taking a long walk in the woods or going on her next adventure.

Hosted in Show some love for M/M Books & BRVL

One Reply to “Book Blitz & Excerpt: Mercury On Fire + Giveaway”

Win an Amazon Card from the Author during the Nightmasters: change of Engagement Book Promotion. @RABTBookTours http://sadiesspotlight.com/giveaway-change-of-engagement/