I used to be a sister, a friend, a ruler of the elflands that belonged to my family’s House. Now, I am a prisoner of the fae, my kind’s sworn enemy since the beginning of time. They put chains around me, thinking they can keep me from breaking free and bathing in their blood. They can’t.

The only reason I stay is because I no longer need a life. My home, my family, my dignity were all taken away from me.

But I have the fae. My captor.

He is every bit the man I was taught to hate long before I knew how to love anything. To the world, he is the ruthless Winter prince who has never lost a battle against elves in his life. To me, his pain whispers other truths.

He’s a prisoner in his castle just as much as I am.

They sent him here to kill his soul.

They sent me here to kill my body.

What they didn’t see coming was that we’d find each other. And that we’d survive. 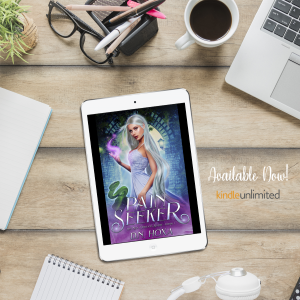 The voice came from behind me, but my muscles were still locked tightly, so I managed to stand still. My eyes closed as I smiled because I knew that voice. It was Hiss—the winged snake, the one I’d convinced myself had been nothing but an imaginary creature.

The joy I felt to realize that he was back was overwhelming. I didn’t care if he was imaginary. All I cared about was that he was there.

“Hello, Pain Seeker,” he said when I pushed myself to sit up and watched him slithering his way down the wall below the windows.

“Hello, Hiss,” I said in a half a voice. His smooth scales turned all shades of green as he moved. He was fascinating, even though his hood was not visible at the moment, and neither were his wings. His eyes, though, took my breath away all over again. All ten of them, like molten gold, were focused on me when he stopped in front of my knees and rose up.

“Do you want to go on an adventure with me, Pain Seeker?”

The words caught me off guard, but the response was automatic. “No.”

The snake’s jaw opened, and he smiled, his tongue coming out to taste the air. “Why ever not?”

“Because I’m a prisoner. I don’t have my freedom.” I didn’t have my life at all.

“You are no prisoner here,” Hiss said, lowering his head on my lap before he slithered up my body, around my waist and up my back. His head came out from under my hair, right next to mine. “There is nobody here who can take anything away from you unwillingly. Why do you stay?”

“Because I have no place else to go.” My heart broke as I spoke the words. It broke at the truth in them—so deep. So final.

“The world is a great place—and not the only one. You can go wherever you want,” he hissed, his tongue licking my cheek every few seconds. The warmth from his body slipping into mine was the closest thing to heaven I could imagine. Slowly, I touched his smooth skin with my fingertips.

“You’re living in a Shade,” he said. “The Shade is a powerful thing. More powerful than anything out there. You know this, don’t you?”

I looked up at the ceiling with a new eye. A Shadergrit.

I’d read about Shades all my life, but I had never been in one before. There were twenty-three of them in existence. They were creatures, guardians—Gateways to the worlds. They were giant beasts who lived on the ground and grew towns, cities, countries on their backs. Magic fueled them. It was why the fae had taken over all the Shades in Gaena—they had a lot more of it than elves did.

To the other worlds, they were safe havens for every creature who possessed magic in their veins. They were homes, workplaces, battlegrounds—anything you needed them to be.

“I’m in a Shade?” I whispered to the ceiling, unable to stop the train of thought that was running through my mind. Everything I’d read about Shades was coming back to me, and I only picked up the things I needed.

Like the fact that a Shade could provide for its subjects anything they needed—in exchange for magic. Magic that I had, unlike most elves in existence.

“You are. It’s a very powerful one, though not as big as some. You can ask it for what you need,” Hiss whispered in my ear.

I could ask the Shade for what I needed.

But what did I need, really?

“I need to die,” I breathed, surprised at my own words. At yet another deep truth in them.

“Good—so die. We all need to kill parts of ourselves every once in a while. It’s the only way we can shed old skin and evolve,” he whispered. “Because that, my dearest Pain Seeker, is the purpose of all that lives: to get better.” He laughed, and the sound was like waves moving in the ocean, deep and calming, but powerful at the same time.

“It’s going to be over soon,” I told Hiss as I looked at the door. “My captor knows I can get out of my chains. Any moment now, he’s going to come in here and finish me.” After two long days.

I wished I’d known I was in a Shade before, though. Maybe I wouldn’t have felt as alone as I did until now.

“Ah, yes. Maceno Iarnea, the Winter prince. I have heard a great deal about him today,” Hiss said and moved around my neck and to the other side of my face, resting his jaw on my shoulder. I kept on playing with his scales. It was very relaxing for whatever reason.

“Maceno,” I whispered to taste the name on my tongue.

“His people call him Mace. They hate him as much as they fear him.”

My fingers stopped on his skin. “Who hates him?”

But it was his answer that was ridiculous.

“Why would they? They’re all fae.” And fae hated elves, not one another.

“The species doesn’t matter. Fear breeds hate in every kind—and your prince is no exception to this rule. But he is an outcast.”

I absorbed every word he said like it was the most important thing I would ever hear. Where did this curiosity about my captor come from?

“What does that mean?”

“It means he was banished from his Court by his father, the King.” Hiss moved away from my shoulder and licked my cheek once more. “I don’t know why, as I wasn’t able to listen properly, but he was cast away from his home, given these men to command, and sent as far away from his kingdom as possible.”

All the pain in the fae. Was this where it came from?

“Tell me more,” I asked Hiss and continued to slide my fingers down his scales as he moved from one side of my face to the other, licking my cheeks. I didn’t realize he was warming me with it until I felt them flushing.

“He has never lost a battle in his life. He has never been defeated, by elf or fae. Before angering his father, he, out of seven sons, was the most favored to inherit the throne when the King decides to retire. Or dies,” Hiss continued. “He’s difficult to speak to, likes to keep to himself, and works his men harder than most commanders all day.”

“And where did you hear this?”

“I’ve spent the day wandering around the Shade, listening to whispers. I am a collector of wisdom, and I have collected a lot of it today,” Hiss said, his tongue now licking my dry lips.

“For you, Pain Seeker. Information is food for the brain. Without it, we wither.”

“But why?” Why did he think it mattered if I withered or not, when I was going to die soon?

“Because you showed me kindness in a world driven by cruelty. You gave me your food when you were starving. You gave me your gift without asking for anything in return. I’ve lived a long life and know how to appreciate small acts of kindness, for they can only be done by great people.”

I smiled, watching all of his ten eyes right in front of mine. “Do great people allow themselves to be fooled and poisoned by their own people, and chained to a wall by their sworn enemies, Hiss?”

“No,” he said, and again, he laughed that wavy sound. “But great people don’t hold others responsible for their misfortunes. They don’t see justice in treating others the same way they were treated. They don’t kill, even when they can, even when they know they should, in the name of the greatest gift we all have—life,” Hiss said, and slowly, he began to unwrap himself from around me. I felt empty where his presence had been a second ago. “To nine of my eyes, that you haven’t killed the prince yet is akin to insanity, but the tenth sees through it. Past it.” He stopped in front of me, his body wrapped in a bundle, his face right in front of mine.

“You make little sense to me,” I said honestly. “But I’m glad you found me, Hiss. Even if you are not real.”

“Sleep now, Pain Seeker. Tomorrow comes another day,” he said, the same second his black wings sprouted from his sides, and he jumped right over my head.

I watched, mesmerized, as he disappeared once more in the darkness of the night, leaving me alone. I wondered, was this all just a dream? Was I at home, in my room, on my bed, sleeping?

Hope sparked in my chest. If it was true, now was the time to wake up. I would slip into sleep and hope to wake up in my bed, surrounded by my people.

I lay down on the stone floor, the warmth Hiss had given me already fading away.

But I no longer felt completely alone. I was in a Shade.

Pressing my hand against the floor, I released some of my magic, as if I were trying to search for pain in the stone. Warmth, I asked the Shade. Please, give me warmth.

It could have been my imagination, but deep in my mind I felt a presence, a connection I had never felt before. It was like a shadow slipping through my thoughts, analyzing them, collecting them.

The stone floor heated up. I didn’t question it. I didn’t allow myself to feel any different, for fear it would slip away. If this was my imagination, all that mattered was that I wasn’t cold anymore. D.N. Hoxa writes paranormal and urban fantasy novels, only when she’s not reading them. There are pieces of her in every story she writes, so if you’ve read any of her books, you already know her. She lives with her husband and their two children, and she can only write at night when everybody else is asleep.