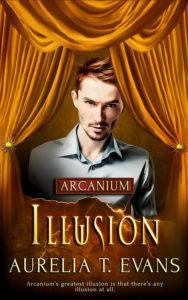 Book 11 in the Arcanium series

When an old flame returns to Arcanium in the company of her own magical circus, Illumina, offering an alliance, Bell initially considers the merger an opportunity for much-needed change.

However, with Illumina comes Maya, who has lost her memories not just of Locke’s Arcanium but all her time with Bell—love, guilt, wishes, everything. Having her memories removed leaves Maya with too large a gap in her mind that she’s desperate to fill, and she knows that Bell, of all the people in Arcanium, can give her the information she’s missing.

Bell still loves Maya and spends every day trying to atone for the pain he caused her and the rest of his cast. In spite of her frustration, she’s happiest without him, without the memories that once nearly destroyed her. If Illumina is to become part of Arcanium, he has no choice. He has to keep his distance, because she doesn’t know why she should run as far away as she can from Arcanium—and from Bell.

Even so, resisting Maya is almost too much for him to bear.

Bell closed his eyes in the golden lantern light backstage.

When Bell let go, spread himself wide over the web of Arcanium, he was its omnipresent god and omnipotent voyeur, from the thoughts of his cast backstage with him to the audience anticipating the performances, the guests putting in their last efforts in the midway and the Skeletons settling in for their evening meal. He could see what they’d done yesterday and what they would do tomorrow. Even when he didn’t try, he had a finger on every pulse within the borders of Arcanium.

There had been nothing since Locke that had come close to taking Arcanium again. The fae hadn’t even constituted a threat. They would have left with far more chagrin if they had known how distant they had been from taking Arcanium by force. And Locke was now a red diamond on Neve’s finger, waiting for the day she was ready to kill him slowly.

Bell’s opiate of choice had always been pleasure, but his taste for violence went in and out with the seasons. He hadn’t the heart anymore for the punishment of man. He had enough of that to contend with in his cast’s memories and nightmares—but he’d rediscovered the old joy in punishing the immortals who had exploited his Arcanium, even if he had to experience the act of punishment secondhand.

Man swallowed against the apple every second they breathed, and Bell burned with the same sadistic sickness as his fireborn brethren. He kept the Ringmaster in Arcanium as much to remind himself of the line he couldn’t cross as to do the things he shouldn’t.

No one had ever told him what he could and couldn’t do. He was neither angel nor demon nor creation from dust. He had determined his own lines, chiseled his own moral code into his skin before Hammurabi had commissioned his scribes. He was free will incarnate, an agent of chaos to cast awry best-laid plans. He was his own, and so he made his world in his own image, populated it with free wills of all shapes and sizes to shape to his liking—which was often to theirs, because it pleased him to manipulate but not necessarily to control. Manipulation meant nothing without will. If he’d wanted slaves, he would have filled the circus with more convincing golems—like a flea circus of mechanical illusion but with zombies.

But where would be the fun in that?

Bell opened his eyes again, returning himself to the moment, although a blink could send him back out into the circus, forward or backward. All Arcanium and beyond was as accessible to him as the palace of his memories, but although grasping the world in his hands became easy when he made himself more of the god he was, he didn’t see much fun in that either. He made things easier for his cast and for himself, imparting skills that they hadn’t or couldn’t have learned before, gifting talent, but even the demons preferred to work for their performances. Without effort, there could be no achievement, and without achievement, no satisfaction. Pleasure, as with pain, had to be earned.

Selena wrapped her arms around his shoulders from behind, her sharp smile against his cheek. She kissed him lightly. “Ready, darling?”

As a demon, Selena could twist her body into shapes that Valorie couldn’t have hoped to create. In Valorie’s case, Bell had wanted a contortionist human enough to be both awe-inspiring and credible. When Selena had offered her services as a demon, he no longer had to keep the contortions credible. He didn’t need her to inspire awe. She preferred to inspire fear.

With her black eyes, dead blue skin and blood-stained hair, she was beautiful, but she was still a demon and plied most of her contortionist trade in the Haunted Funhouse rather than in the big top. For the big top performances, she’d taken over Maya’s role as his magician’s assistant and damsel in distress—at least, Arcanium’s version of a damsel in distress, which rarely followed a traditional plot.

Selena retrieved one of the steel knives, gleaming silver as new for every performance, from the bandolier around his torso and brought it to his throat. He lifted his chin, threaded his fingers through her locked hair, breathed in her craving for impure blood. When she shifted her kiss to his mouth, he met that craving with his tongue, hissing as her sharp teeth caught him and she slid the blade over his chin. Then she kissed down to the trickle of blood and drank from the wound until he healed it under her mouth.

She fed from his corruption instead of feeding from his people or too many of his guests, and in return, she made him numb. She could render men into oblivion, but the best she could do for Bell was take both the pleasure and the pain away for a time.

Most of the human cast believed he was sleeping with Selena. Kitty knew better. Neve and Elizabeth had guessed otherwise. And, to his annoyance, Vivian suspected, although because she didn’t know, she hadn’t shared that information with Dom or Delilah. The demons and the faerie could tell just by looking at him, but they wouldn’t share that information one way or the other. A jinni’s business, like that of a demon’s, was his own.

Selena kept his secret, liked keeping secrets in general, because secrets so easily corrupted, improving the flavor of that which she fed upon. It was only apt that she’d chosen an actual lover among his humans who was as ingenuous as they came. The fact that she regularly drained Victor of corruption that he had done nothing to earn satisfied Bell.

Selena licked the smear of blood from the edge of the blade before returning it to the bandolier. Then she jumped onto his back, wrapping her legs and arms around him. She was taller than him by half a head without heels, over a head with the ones she wore for the performance, but although taking a human form limited him in many ways, it didn’t impede his strength. He caught her legs and tucked her against him as he carried her to the curtains. Chelsine would finish her fire dance any minute, which would cue the lights for Sera’s aerial act. After Sera, Bell and Selena would enter. Though Selena should have been getting into place, Sasha and Mikhail had worked their magic, as they always did, and both Bell and Selena were reluctant to part.

Bell had never been so frustrated for so long.

Selena would find her own satisfaction after the performance, as most of his cast did. Some didn’t even wait until they were out from backstage.

To be surrounded by the lust and love of his people, to feel it against his skin, against his teeth, to drink it like milk and honey, hum with the vibrations of their moans and screams, watch them dance around each other, caress, kiss, their pupils dilated and their cheeks flushed, the touch of their tongue to their lips… It was the torture of his own dungeon, to be surrounded by everything he wanted but not to partake himself, even when he was tempted.

Instead, he rested his head back against Selena’s chest as her hair draped on either side of his face.

Selena slid from his back and kissed his shoulder. “Hard out there for a demon with a soul. You, of all people, should know better than to resist. God, Bell, there are so many willing victims. Why do you do this to yourself?”

He didn’t have a word she would understand. Demons punished with ease, but they had little concept of self-punishment. The closest any of them came was limited self-denial.

“I’ll see you in the ring.” Bell would seem casual to anyone without an extra sense or two to detect the deception.

“Sure, handsome.” Selena broke away, scurrying up the ladder to the heavens, where the trapeze swings, spotlights and aerial silks lived.

Neve was his crown jewel—the Spider, a black diamond he would keep in a vault if he could, but Kitty, who reclined on the chaise longue, was the life’s blood, the very beating heart of his circus. Locke had understood that she was valuable but hadn’t understood how much, or else he would never have allowed the Ringmaster to take her for himself.

Without an ounce of magic in her blood, Kitty sensed his attention, opened her eyes and met Bell’s gaze across backstage. Though she couldn’t see it, the Ringmaster’s darkness seeped from under the curtains as he introduced Sera, but when it reached Kitty, it dissipated. She was a pink, floral oasis in a sea of smoke.

Bell sent her what love he could spare from a distance. She received it like a blanket warmed in sunlight, because she was his Kitty Cat and he could rest his head on her shoulder and hold her until the sun rose and set again. Even if she blamed him like the rest, she’d lost none of her love for him. If a human being could become family to jinn, they had bound themselves with something thicker than blood. 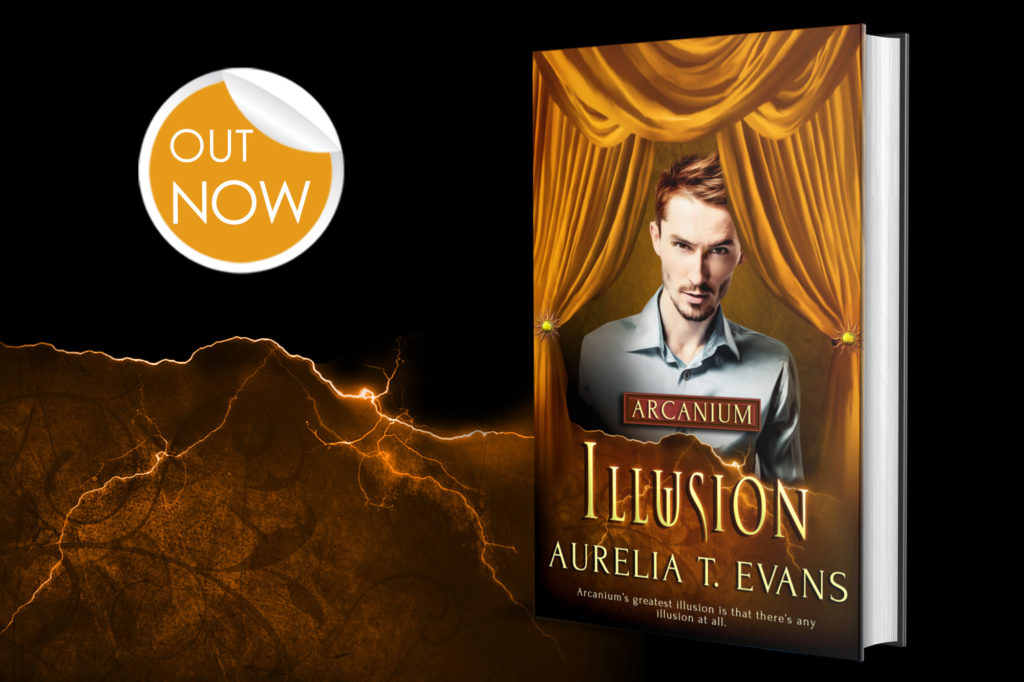 Aurelia T. Evans is an up-and-coming erotica author with a penchant for horror and the supernatural.

Aurelia presently lives in Dallas, Texas (although she doesn’t ride horses or wear hats). She loves cats and enjoys baking as much as she dislikes cooking. She’s a walker, not a runner, and she writes outside as often as possible.

Enter for your chance to win a $50.00 Amazon Gift get a FREE romance book from the author!

AURELIA T. EVANS IS GIVING AWAY A $50.00 AMAZON GIFT CARD TO ONE LUCKY WINNER. ENTER HERE FOR YOUR CHANCE TO WIN AND GET A FREE EBOOK FROM THE AUTHOR! Notice: This competition ends on 11TH May 2021 at 5pm GMT. Competition hosted by Totally Entwined Group.