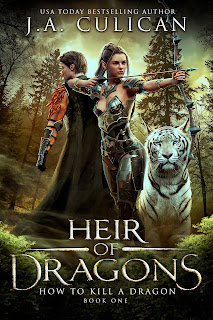 The dragons are gathering, which can only mean one thing. Death.
Minx, a royal Fae has been tasked with saving her people. Problem is, the only way to do that is by slaying a dragon and bringing their hide back to Paddling Grounds. The magic that resides inside dragons is strong and without it her people will die.
Except Minx has never slayed a dragon, she hasn’t even ever seen one, but she knows where to find them. With help from her Faelyr, half fae and half tiger companion, Minx sets out to Talon Range.
Kaleb, the dragon heir to the Pyra clan isn’t looking for war. But then again no one has ever asked him what he wants. He has a duty and he will do whatever is needed to keep his people safe. Even if that means taking on the darkness himself.
When Kaleb and Minx come face to face, a battle erupts. Neither are giving up, neither will fail. Until they realize they share a common enemy and only together can they defeat them.
With a pull between them that is strictly forbidden, Minx and Kaleb find they are on their own and time is running out.
A fae, a dragon and a war neither are prepared for. The end of both species is near and only they can save each other.
How to Kill a Dragon is the first book in the Heir of Dragons trilogy by USA Today Bestselling Author J.A. Culican. Full of dark magic, dragon shifters, and forbidden romance. Fans of Jennifer L. Armentrout and Sarah J. Maas will love this new epic fantasy romance with a dose of dragon-riding and magic bonding.

“It sounds like the Fae are going to have a big fight on their hands,” said Kaleb, arms crossed. “We’ll find some way to protect the realm—”
“I’ll say we will,” interrupted Minx.
“I’m going to find myself a dragon’s hide and get it to the elders before time runs out. That’s the mission. Nothing’s changed.”
The dragon shifter sighed, kneading his brow with a few fingers. “We’re going to find a way to protect the realm,” he repeated. “Another way.”
“If we don’t reset the shields, then—”
Kaleb raised a hand to silence her.
“You want to protect your home, your people. I understand that. In fact, I respect it.” He donned a genuine smile, motioning at the chair she’d just abandoned. “You know, that’s what I was raised to do, too. To defend my kind at
any cost. You only get one homeland, one people. Only a coward wouldn’t risk
everything to defend their own. But what you’re asking for…” He shook his
head. “There has to be another way. And together, I think we can find it,
Minx.”
***
Watching the movements of the sword very closely, he’d managed to reach out and grab the Fae’s thin arm before she could connect with her weapon, and applying his forceful grip, the dragon shifter put pressure on her forearm till she cried out in pain and the sword fell from her grasp. She fell to her knees, tugging and panting but ultimately unable to pull away from him.
He heard the smooth nocking of an arrow, the drawing of a bow. “No!”
Minx had wasted no time. With her opponent disarmed by the dragon shifter, she’d loaded a fresh shot and prepared to deliver a point-blank coup de grace. The arrow had begun to fly, only to meet its terminus in Kaleb’s waiting hand. The sharpened tip of the arrow sheared the skin of his palm neatly, but he was able to stop the thing before it reached its intended target, and he cast it away with a wince.
“What are you doing?” demanded Minx, pulling another arrow from her quiver.
At this, he reached out and took Minx by the arm, pulling her close with such unexpected force she dropped her bow. A wide-eyed rag doll in his furious gaze, she found herself nearly nose-to-nose with him, his hot breath streaking across her reddening cheek. “No more. You can’t kill her, Minx,” he ordered. “The fight is over. Understand?”
They remained in this way for several beats, the race of her pulse felt clearly against his wounded palm. From this distance—closer than he’d ever been to her before—he couldn’t help taking in the faint quiver of her soft lips, the innocence of her wide, watery eyes.
Sure, she was a Fae—but he couldn’t deny her loveliness. She didn’t pull away from him, didn’t make an immediate effort to break free, and the quickening of her pulse almost gave him the impression she liked being in his grasp.
Get ahold of yourself, he thought, letting her go gently when he was sure she would no longer lash out. He shook his head, sporting an almost embarrassed grin. There are more important things to worry about. Are you really going to let yourself get carried away with this girl? She’s a Fae, after all! What are you thinking?
Minx’s face had taken on an uncharacteristic flush. She drew away from him, lowering her gaze and slowly picking up her weapon. Running a hand through her dark, tousled locks, she couldn’t seem to find her voice and stood silently beside the cage where Mau watched in silence.
He had to force himself to look away from Minx, to distract himself and quiet the thumping of his own heart. A Dragon and a Fae? You’re really losing it, aren’t you? But then, maybe…
***
Kaleb, having regained his breath, struggled to his feet. “You’re not taking her anywhere, you understand me?” He stood upright with a pained grunt, arms hanging at his sides.
Torrent pointed at the dragon and shot Alla a sharp glance. “I’d love to leave them out of it, but they insist on butting in. I suppose I have no choice.” He thrust out an open palm, fingers arrayed rigidly like claws, and turned toward Kaleb. “You should have stayed down the first time.”
There was, in the next instant, a flash of blinding light.
The sound of splitting metal and splintering trees sounded, and Minx felt a powerful burst of wind wash past her. It came so intensely that she fell onto her back, unable to remain seated on the ground, while Kaleb was hurried off his feet entirely and thrust against the nearest tree.
When the dust had settled and her eyes had adjusted after the brilliant flash, Minx turned to Kaleb and began crawling toward him.
And then she halted, heart seizing and guts churning.
Slack-jawed and moaning, Kaleb had been pinned to the massive trunk of the tree—not by any invisible force or psychical trick, but by arrows. Three stone-colored arrows, conjured by Torrent, had penetrated Kaleb’s dense armor and impaled him at various points through the chest and stomach. The tips of said arrows had passed straight through him, and were buried in the trunk of the ancient tree, which had rattled and creaked as though a mere sapling.
It was impossible. Everything she’d witnessed was impossible. No normal arrow could hope to pierce Kaleb’s thick plate armor. But Torrent had stuck the dragon shifter with three at once, summoning them from thin air. He remained pinned to the tree, bleeding profusely. His end was very near. No one could sustain that kind of damage and hope to recover.
***

I’ve not only disgraced my father, but my entire people. I’m not worthy of the title of Dragon Hunter—or Royal Fae, even.
I feel like I’ve betrayed them all…

“What are you talking about?” blurted Minx.
“He very nearly killed you, Kaleb! We need to be careful around him.”

Minx had been waiting for this day. The wait had seemed to her an eternity. Journeying across the land with Kaleb and Mau, finding herself in one mess after another, she had begun to wonder whether the fateful clash would ever arrive. Now, as Kaleb lumbered on with her on his back, the wait was over. She squinted into the distance, spying untold hordes bearing down on her precious homeland. There were more marchers flooding in from the horizon than she could hope to slay with a hundred full quivers, and she felt almost dizzy at the immensity of their ranks. It’s like a dream, she thought absently, clinging to the dragon shifter’s scales. Minx knew what it meant to fight in a battle; this, however, was a war. 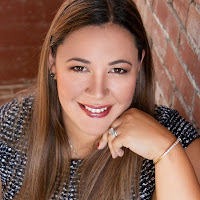 J.A. Culican is a USA Today Bestselling author of the middle grade fantasy series Keeper of Dragons. Her first novel in the fictional series catapulted a
trajectory of titles and awards, including top selling author on the USA Today bestsellers list and Amazon, and a rightfully earned spot as an international
best seller. Additional accolades include Best Fantasy Book of 2016, Runner-up
in Reality Bites Book Awards, and 1st place for Best Coming of Age Book from
the Indie book Awards.

J.A. Culican holds a Master’s degree in Special Education from Niagara University, in which she has been teaching special education for over 13 years. She is also the president of the autism awareness non-profit Puzzle Peace United. J.A. Culican resides in Southern New Jersey with her husband and four young children. 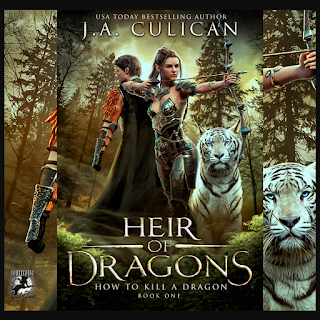 One Reply to “Spotlight & Excerpt: How to Kill a Dragon, by J.A. Culican”