I stood in their way and now they vowed to destroy me.

All I wanted was to experience life without my every move monitored, and Moretti Academy was my chance at freedom.

They had other ideas.

The werewolf I grew up with, the cold fae sleeping with school staff, and a dragon with psychotic tendencies set their sights on me—and not in a good way.

The university was supposed to save my life by bringing out my dragon, but the cruel beasts tormenting me may kill me before I get the chance to live.

CRUEL BEASTS is a 96,000 word paranormal romance with enemy-to-lovers/love-hate themes. This is a REVERSE HAREM novel, meaning the main character will end up with more than one love interest by the end of the series. This is book ONE of FOUR in the series. Triggers: Contains foul language, sexual scenes, heavy bullying, cliffhanger, and jealous/possessive themes. 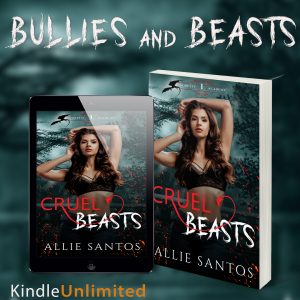 Blinking, I registered he was still frozen under my touch and gaping down at me with those blue, gold flecked eyes. I lifted a finger, getting on my tip toes to poke his forehead as I’d done a million times before.

“Who’s this, Beckett?” A smooth low feminine voice said, and I finally peeked to see who the other three forms were. I met my neighbor’s furious gaze before jumping to Tanner Volkov’s cold arrogant features and finally settling on a waif of a girl that rivaled the guys’ height.

“She’s nothing. Some kid I grew up with,” Beckett interrupted me and grabbed my arms in a hard grip. I stifled my wince as he forcefully loosened my hold from him and shoved my arms away.

“Kid?” I muttered, confused. “You’re two years older than me.” I peered into his impassive expression as his gaze roved over me with derision. I frowned, where were the usual smiles?

“More of an annoyance than anything,” he continued as if I hadn’t spoken and shrugged. I refused to believe this rude creature in front of me was Beckett.

“I see you’re firmly belted on the douche train. Is this some ‘being an ass’ phase you’re going through?” I asked, honestly curious.

Enzo took a step forward, pulling my attention to him when he gripped the collar of my uniform. “I thought I was clear yesterday.” The material stretched as he forced me closer to his face. The shirt became half untucked and air brushed my exposed midriff. I had to inch onto my toes so the collar didn’t choke me.

My eyebrows went up. “Clear about what, exactly?” Okay, now I was poking at him on purpose, but were these guys for real? A vein pulsed on his forehead as his jaw worked furiously and golden eyes slitting murderously. “You have really nice eyes.” Maybe offering him a compliment would help the redness fade from his face. Was he even breathing? Allie wishes she’d discovered books sooner than she did but has made up for the lost time by reading everything romance related that’s crossed her path. She has a proclivity toward sexy, possessive heroes and headstrong, stubborn heroines. So, it’s no wonder characters just like that bustle to escape her imagination.