This is my stop during the blog tour for Third Wheel by Kat Green. Third Wheel is the third book in the Haunts for Sale series, that follows paranormal real estate agent Sloane Osborne who sells haunted houses. Get ready for plenty of ghosts, mystery, suspense and romance. 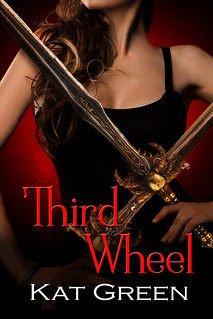 Sloane Osbourne, paranormal real-estate agent, receives a frantic call from another agent injured by a ghost. She races to help but instead she discovers she’s the victim of blackmail. Things go from bad to worse when she learns FBI agent Jonah Prescott is missing. With time running out to save her job, she rushes to Las Vegas to search for the man she loves. In Vegas she frantically hunts for Jonah only to find him and lose him again. Not knowing if her one true love is dead or alive, she heads back to St. Louis. There, events take another turn. With an enemy dogging her footsteps, she needs to salvage her business and prevent Jonah from becoming a ghost himself.

This is Book Three in the Haunts for Sale Series chronicling the adventures of Sloane Osbourne, paranormal real-estate agent.

Big Series Discount!
The whole Haunts for Sale series is discounted for the duration of this tour! You can get all 3 books for only 99 cents each! Grab the series here:
– Amazon
– Barnes & Noble
– Kobo
– Apple
– Scribd

You can also find Third Wheel on Goodreads

Earlier books in the series: 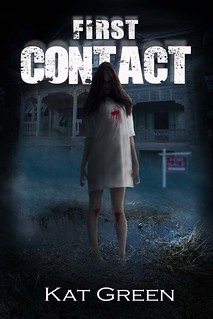 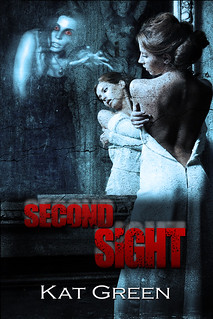 First Contact (Haunts for Sale #1) by Kat Green
“Sloane Osborne is a paranormal realtor in the business of selling haunted houses but, in truth, she’s only searching for one ghost.”Links:
– Goodreads
– Amazon
– Barnes & Noble
– Kobo
– Apple 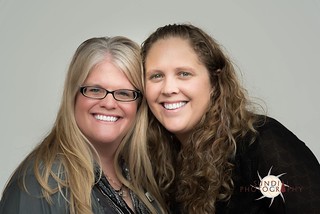 About the Author:
Kat Green is the alias of authors KAT de Falla and Rachel GREEN.

Rachel Green has always believed in ghosts but saw her first full body apparition while working at an old movie theater in college. When she met Kat de Falla at a writer’s workshop, she knew she’d met a kindred spirit – one who was also sensitive to the hereafter. And after bonding on a few ghost adventures, Kat Green was born.

Kat de Falla lived in a haunted house for too long. When things really heated up, she had several paranormal teams investigate, but things only got worse. When her mother suggested they contact a shaman, she agreed to come, saying she had been waiting for Kat’s call. The home was cleansed and sold. When she paired up with Rachel Green, the idea of co-writing a book with a paranormal real estate agent seemed perfect.

Fans of Ghost Adventures, The Dead Files, Ghosthunters, and the movie Ghost will love this series!

Giveaway
There is a tour-wide giveaway for the blog tour of Third Wheel. One winner will win either a 3-month audible subscription or a $45 Amazon gift card, winner’s choice. Open International.

This blog tour is organized by Lola’s Blog Tours. The blog tour runs from 27 November till 18 December. See the tour schedule here. And check out the tour-wide giveaway.