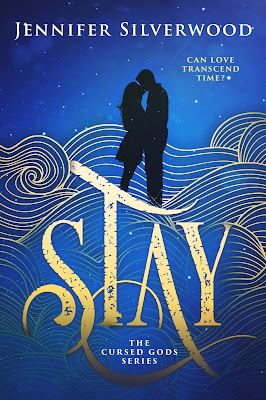 Rona believes love is nothing more than a myth, a tale for little girls. Until the immortal ruler of the seas appears from thin air and she is swept into a dark and dangerous affair. What was formerly myth soon becomes part of the everyday. And Rona believes when Seid tells her they will be together forever. But forever is a long time and after she betrays him, what was supposed to be an eternity in paradise becomes an eternity in hell. Now she is cursed, unable to feel emotions except through the couples she is led to test and save.

Two thousand years is an awfully long time to live alone. And the business of love saving isn’t what it used to be. By the twenty-first century, Rona’s ready to give up. Until the night she is seen by a human. Deep in the underbelly of the city that never sleeps, she recognizes him instantly. He may dress differently and have gained a few new scars, but she would recognize the face of her former lover in any lifetime. Trouble is, he seems to have no memory of her and he and his ex-girlfriend are the ones whose true love she’s meant to save. But when he starts to fall for her, she is forced to learn what it means to be human all over again.

The city was beautiful and wicked, but it was a false beauty compared to the things I had seen. When he cursed me I could feel everything, from contentment to sorrow, but never love. Seid had given me the ability to see it in others and destroy it when it was false or save it if true. Yet the only thing that managed to stir me these days was the memory of my death. Only my memories kept me going. Vengefully I often wished he still knew my every thought and suffered the recall of our every moment together.

Thinking of Seid made my cloak slip enough to expose an outline of my features. I never would have noticed my mistake if the boy coming my way hadn’t pointed and began to shout a stream of curses to his friends. Other people were turning and beginning to take notice, the old couple clutching onto each other to ward away the winter chill, the little girl picking their pocket for loose change, Black Market vendors dealing on the side.

Breathing in deeply, an ancient but unnecessary habit now, I drew the fabric tighter and focused on my mission. For several minutes I ran faster than their eyes could follow, beating myself on the inside for my carelessness.

“You must never be seen by anyone,” his words echoed in my memories, settled deep in my bones and made me shiver. I couldn’t think about Seid now, not when I needed to focus.

My new mission was close. When I turned the colors in my eyes just right I could see his aura through the chaos of buildings and people. And the closer I drifted the faster I was, until I was no longer walking but floating, flying through every obstacle in my path.

Looking up at the buildings I noticed the flashing lights had been mercifully left behind. Once his building was in sight my pulse began to sputter, to race and soar. I could feel the budding newness of his affection for her in my chest and savored it. This is the closest I came to feeling human emotions these days.

My vision cleared once I stood outside the window before them. All sound ceased to exist, save their words and breaths. The café was dimly lit, a very old nightclub from the looks of it. Wordless music crooned up from below, horns and the strokes of piano keys. Feet shuffled in rhythm to the soft beat of a drum.

That was when I heard their voices for the first time.

“You look so perfect tonight Lissa…” he practically growled in her ear.

She giggled and answered in a sultry tone, “Good enough to eat?”

Chuckling low he kissed her on the lips, “That’s right, baby.”

I frowned as the brick wall kept blocking my vision and realized too late I wasn’t peering through a window. I would have to go inside to better see. Walking through walls used to scare me senseless until I grew accustomed. Now I brushed the feeling aside as I squeezed past the gritty matter. The front room was built to disguise the underground world beneath it. Worn down like the rest of this city, no one would ever believe the cultural haven it sheltered.

For a brief moment, I recalled brilliant jewels and brassy music, short dresses lined with tassels of an era gone by and women’s laughter over the chink of forbidden liquid.

The present incarnation pulled me back to the present. I had passed through the secret door, walked down a short flight of stairs and now watched from inside the smoky club. Here women still dressed to please and men of a higher class sought their nightly trophies. On stage, the jazz band played and at the center of the dance floor, my newest assignment drank their fill of each other.

When the tempo began to drag into a slower tune, she tilted her head back to expose her neck. Her long brown locks trailed to her red-clad hips. He tightened his hold on her waist as he kissed her neck. And I could feel the thrill in her heart temporarily mask a quiet sorrow.

Yet there was nothing from the man.

I frowned and turned my eyes to the rest of the establishment. Where was the budding newness of his affection I so strongly felt outside?

“Excuse me?” A deep, rough voice came from behind me, over my shoulder and I froze.

He cannot see me.

Convinced that he was speaking to another patron I nearly walked on. Perhaps I was not close enough to them to feel the man’s love for this girl?

“Come back to my place…” I clearly heard the man whisper into the woman’s ear. Her emerald eyes sparkled as she batted her lashes and pulled back her full lips in a saucy grin.

I took another step and gasped when a hard hand clasped my shoulder and spun me firmly round.

No one touched me, had not in two thousand years.

Yet his hand remained planted on my shoulder in its firm grip and I followed the shape of his muscled arm to the chest attached to it. His black shirt was a tight fit and in the dim blue and red lights seemed to flash several colors. He bent down so his eyes met my line of sight.

My mouth dropped the moment I breathed in his scent.

My vision blackened and suddenly broke through in brilliant flashes of light around his face. I could feel the colors growing, shifting and glowing in my eyes, beneath my skin. I clenched my fists as I fought for control, convinced I had lost it for the first time. Had I wanted him so badly in my memories that they came to life?

Reaching up to clutch my waist he kept me from falling down the short flight of stairs. A frown creased his brow as he said, “Whoa there, take it easy. I didn’t mean to scare you. It’s just my job to check everyone before they come in. You got any I.D?”

I shook my head slowly and watched as those eyes, his eyes, shifted from the dance floor and back to me a few times. Holding up a couple of fingers he nodded to someone over my shoulder and returned his attention to me. Something flickered in those dark blue orbs akin to recognition. Clenching his firm jaw he sighed and then nodded to himself.

“Look miss,” he began, “I’m really sorry but you can’t stay here without any I.D. Any chance you can find your way back up?”

I was trembling. Just hearing his voice again set every forgotten nerve in my body on edge. My flesh was on fire beneath my cloak where his fingers touched. Still, I had forgotten my voice for too long and could not remember how to speak.

How could he see me when I had refastened my cloak once again? It was such a thin, flimsy thing, like a second skin I wore it so often I forgot. But no human had ever seen me beneath it before.

It has to be him.

His frown deepened, voice dropping to a softer unused tone. “You’re shaking all over… You okay?”

No one else has the power to see.

My mouth opened but no sound came out. I was forbidden to speak to the humans. And even though he had Seid’s face, the curse commanded my attention. Oddly enough, I could feel what he felt.

He feels nothing toward me.

He did not recognize me.

His eyes flickered up as two pairs of feet approached us from behind. Immediately his arm curled me closer to his chest and his eyes darkened.

Lissa and her date were speaking in hushed tones, but I heard them clear as the true light.

“—so hard you’ll see stars,” the man was saying.

Lissa giggled and playfully swatted him with her clutch. “Derek!”

They paused on our level at the head of the stair. Another girl brought their jackets to them. As Derek helped Lissa into her fur jacket her gaze locked on to the man holding me.

That was when the truth settled over me with horrifying clarity. The aura I had followed across a country, across a city, was burning brightly between them. Invisible to them, the golden strands were weak now, but the link between them unmistakable. It linked this man, the man who wore his face, to her, Lissa.

The man holding me tensed and clutched me tighter to him again, his words stuck on the roof of his mouth.

Instead the other girl who handed out and hung cloaks offered, “Good job tonight. See you tomorrow Lissa,” as Derek and Lissa walked through the secret door.

And to my horror I watched the threads stretch and fade that linked them to me. 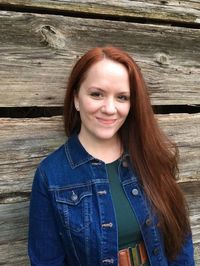 Jennifer Silverwood has been involved in the publishing world since 2012 and is passionate about supporting the writing community however she can. After studying traditional art at University, she loves helping Qamber Designs & Media bring authors’ books to life. Jennifer is the author of ten novels and founder of We Write Fantasy, a blog and support group for fellow genre authors. She is the author of the Wylder Tales Series, the Borderlands Saga, and the romance titles Stay and She Walks in Moonlight.