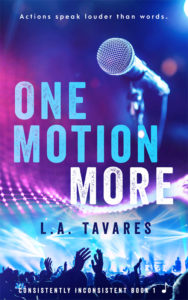 One Motion More
by L.A. Tavares

Long-haired bad-boy guitarist Xander has skeletons in his closest that refuse to stay dead. After a series of setbacks, Xander hits new lows, almost costing himself his reputation and career. While trying to take steps in the right direction toward better decisions and good choices, he meets Natalie, and for the first time—maybe ever—Xander sees past himself and past the music his rock band is famous for.

Their relationship is an unlikely one, with outside factors creating obstacles the two would have to tackle to make their love work.

He is reckless while she responsible.

He thrives in the spotlight while she will do anything to avoid it.

He speaks fluent profanity while she doesn’t speak at all.

He works to win her heart, despite having to overcome the communication barrier, while she tries to look past the intensity of the spotlight they find themselves in.

The locked, guarded door and shiny new mark on my already scarred record are laughable penalties. The real punishment is the smell in these small quarters—body odors, stale alcohol. One thing is for sure… There are no VIP suites in New York police stations.

More like a bench than a bed, the slab of flat ceramic I lay on is uncomfortable and determined to punish me with back problems that will last longer than this overnight hold.

My eyes snap shut each time I try to open them—an involuntary response to block out the outdated fluorescent light overhead. I press the palms of my hands into my eye sockets and run my fingers through my overgrown hair. Sure, the lights don’t help my already throbbing head and the sleeping arrangement is a far cry from comfortable, but the atmosphere is ‘welcoming’. I purposely bent the rules just far enough to win myself a one-night, all-inclusive stay at the nearest precinct.

Quiet. No crowds. No screaming fans. Nowhere for me to be, no way for me to screw up. Most people would find the locked doors, silence and lack of company alarming. Not me. For me, it’s tranquil. A vacation. Maybe that’s why I frequent the sin-bin so often.

“Hey there, sunshine,” a plump guard says, opening the thick-paned glass door so it swings into the hallway. He leans into the metal door frame, holding a large stick of beef jerky in one hand, tearing off a chunk between his teeth and chewing so I can hear it.

“The doors are a nice upgrade,” I say through a yawn as I knock on the glass. “They were bars when I was here last.”

He gnaws on the dried meat, unamused. “There’s someone here to pick you up,” he says as he chews, spewing small chunks of meat and saliva as he speaks.

“Aw, so soon?” I bring myself to my feet and stretch—every muscle protests. “Guess I’m not twenty-one anymore, eh?” I ask.

“Maybe you should stop trying to be,” he says. His stone expression remains as such.

“Noted,” I add, and salute him as I step away from the cell, turn around and head toward the station’s lobby to retrieve my sunglasses and cell phone before heading out of the doors.

Blake—my bass guitarist and lifelong best friend—leans against a car I’ve never seen before, opens the back door and gets in without waiting for me to approach him. He slides to the opposite side of the hired car and I slide in next to him, closing the door as the driver pulls away from the curb.

“How bad this time?” I ask, one side of my mouth lifting at the corner.

“You really don’t remember?” he asks.

“No. That was the whole point.” I drop my phone into the breast pocket of my shirt and place my sunglasses over my eyes.

Blake tilts back the top of a box of Marlboro Reds, a flagrant disregard of the No Smoking sticker adhered to the car’s dash. The lingering tobacco smell of the car tells me he’s already broken that rule.

“Never fear,” I say, elbowing him in the arm. “Social media and the news will remind me, I’m sure.”

“If Cooper doesn’t kill you first,” Blake adds, cracking the window and fishing for a Bic in his breast pocket. His words come out draped in a mix of his slightly faded South African accent and the dialect he has picked up during his years in the States.

Blake moved into my house at a time when his mother couldn’t provide for him anymore—right as we started tenth grade and, truthfully, his appearance hasn’t changed much since I met him in junior high. He looks almost the same way now as he did then, down to his stupid blond-tipped faux hawk and slightly spaced teeth. Only now, the tall, slender physique he boasted back then has morphed into a ‘definitely enjoys beer’-type body. Though, the same could be said for me.

The car arrives back at the venue where we are set to have our second show in a back-to-back schedule.

We enter the building and Blake walks ahead of me by about five strides. I am in no condition to keep up. He turns a corner, disappearing from view. As I turn the same corner, Cooper, our band’s manager, is standing there waiting for me. Startled, I jump out of my boots and my stomach takes a drop it can barely handle. I swallow back whatever threatens to make a reappearance.

“Jeez—” I start, but he has no intention of letting me talk.

“Leave,” he says, his eyes an even deeper brown than they usually are, enhanced by the dark bags beneath them. “Go find food, water and a shower. Whatever it is you need to do to clean up and be ready for today.”

“You should be grateful we have a show today because I can tell you—no, I can promise you—if I didn’t need you today, you would still be sitting in that cell.” Cooper paces the width of the hallway, pausing every few moments to make a hand gesture my direction, as if he can’t walk and shake his fist all at the same time. “You’re lucky the cops here are fans of yours, you know. There will come a day where just being Xander Varro doesn’t get you what you want. Your status won’t get you out of everything forever. The sooner you understand that the better.”

“I had a few drinks. I was having a good time—”

“Drunk and disorderly, disturbing the peace, resisting arrest.” Cooper starts listing off, using his fingers to keep track of all the misdemeanors. “This band can’t keep a publicist because they’re tired of covering for you. You can’t keep yourself out of the negativity and the spotlight. You’re dependent on drama. You’re going to be a father, for crying out loud. When do you plan to grow up, Xander? When is enough, enough?”

He’s right, but I’m too proud to admit it. Cooper’s growl shifts to a hushed pause, allowing me to say my piece or apologize, but I don’t do either, so he continues, filling the silent void.

“This isn’t just about you, you know. Your band counts on you. Your fans count on you. I count on you. Someday your kid will count on you, and you are becoming the kind of guy who can’t be counted on.” His pacing comes to a halt and his eyes soften. His voice quiets, falling so calm that I would almost prefer the yelling. “You have it all, Xander. Everything. Stop trying to throw it all away.”

I nod, a silent response, even though I know Cooper wants more from me. It’s all I have to offer.

“Just go, Xander,” he says. “Come back when you’re ready to be on that stage and not a second sooner.”

“Can you send a car to take me back to the hotel?”

I laugh at his joke, but the sound becomes a scoff when I realize he’s serious. I nod without enthusiasm and turn toward the door, slamming my bodyweight into the metal push bar though the signs clearly indicate Emergency Exit Only.

The hotel is only just over a mile away, but I’m still annoyed. These boots definitely were not made for walking. My feet are throbbing by the time I arrive at the lavish hotel doors. The lock clicks as I hold the key card to the door of the hotel room that I was supposed to be long-checked-out of. I lay on the bed longer than I should, ignoring the clothes and other items strewn across it. A red light blinks at the base of the landline phone the hotel provides, most likely a wakeup call ordered by Cooper or a message about the late fees incurred as a result of the ignored check-out. I almost delete it without listening, figuring whatever message it holds is either now irrelevant or I just don’t care what it has to say.

But I click it, and my girlfriend’s voice is on the other end. I smile at first, listening to her words.

But the smile fades to a flatline. Why would she call the hotel and not my cell phone?

“I have something to tell you.” 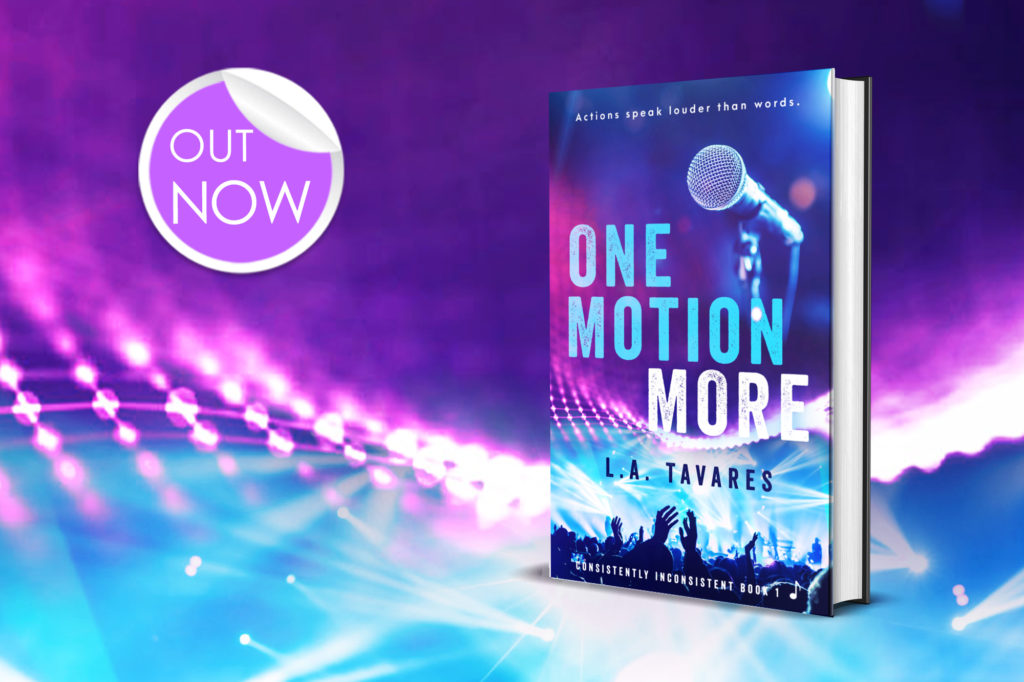 When it comes to romance, L A doesn’t have a type. Sometimes it’s dark and devastating, sometimes it’s soft and simple – truly, it just depends what her imaginary friends are doing at the time she starts writing about them.

L A has moved to various parts of the country over the last ten years but her heart has never left Boston.

And no, the “A” does not stand for Anne.

L.A. TAVARES IS GIVING AWAY THIS FABULOUS PRIZE TO ONE LUCKY WINNER. ENTER HERE FOR YOUR CHANCE TO WIN A LOVELY GIFT PACKAGE AND GET A FIRST FOR ROMANCE GIFT CARD! Notice: This competition ends on 23rd March 2021 at 5pm GMT. Competition hosted by Totally Entwined Group.

One Reply to “Book Blitz & Excerpt: One Motion More + Giveaway”