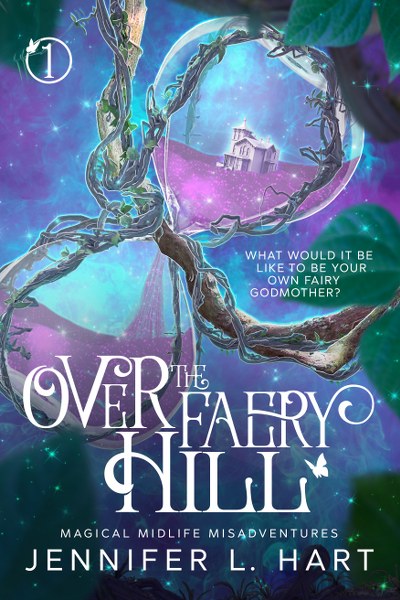 A mountain of regrets. A bargain with a mischievous faery. Could tinkering with her past create a better future?

Joey Whitmore longs to escape her dead-end world. Facing a midlife crisis at age forty-two and still living with her mother, getting fired from yet another job is the proverbial last straw. So when a fae trickster in human guise offers a chance at changing her history, she figures there’s nothing left to lose.

Though skeptical of his magic, Joey accepts the sly prince’s enchanted hourglass and begins a reckless journey back in time. But as she tries to act as her own fairy godmother and reverse her mistakes, her blundering interference causes a chain of catastrophic consequences.

Will Joey’s attempts to alter her deadbeat destiny end up erasing her entire existence?

Over the Fairy Hill is the first entry in the Magical Midlife Misadventures paranormal women’s fiction series. If you like relatable characters, paranormal twists, and laugh-out-loud humor, then you’ll love Jennifer L. Hart’s endearing tale.

Buy Over the Faery Hill to grant a bag full of dubious wishes today!
**On Sale for the month of April – only $2.49!!**
Add to Goodreads
Amazon * Audible

I scrolled down through the listings, many of which were seasonal and wouldn’t start back up until spring. All of the nearby ski resorts were full up and things like ziplining and rafting were definitely warm weather-based. Plus, with my bum wrist, it wasn’t like I could tackle anything uber physical.

Irritated, I snapped the laptop shut and stared out the window, massaging the ache in my wrist more out of habit than any real pain. My mother was right. At my age, not knowing what I wanted to be when I grew up was just plain sad.

Maybe because the one thing I had truly wanted to be had been taken away from me at sixteen. My gaze fell on the 1st place ribbons, the trophies and newspaper clippings on the built-in bookcase across the way. Artistic gymnastics, first place. Six years running. A photo of me in midair, doing a back handspring off the balance beam. The headline read—Local gymnast is heading for Olympic glory.

It had been more than hope though. It had been my whole life for as long as I could remember. Fate might as well have minced up to me, cracked her gum in my face, and said, “Sorry, Joey. No gold medal for you. How about a lifetime of scraping by instead?” I’d been groping for a purpose ever since. 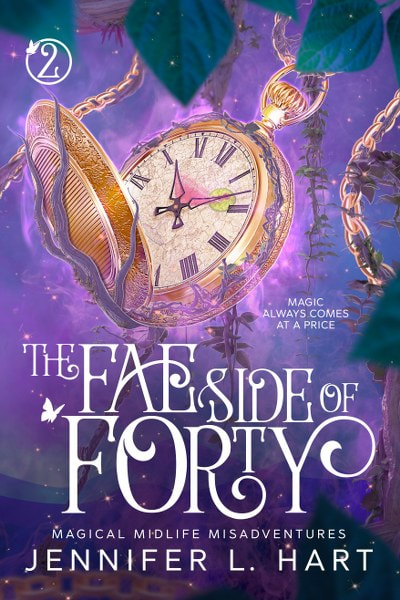 The Fae Side of Forty
Magical Midlife Misadventures Book 2

She made a bargain with a fae prince…but how high is the price?

Joey Whitmore has learned her lesson when it comes to magic—it just isn’t worth the toll. Her plan is to keep her nose clean and enjoy midlife to the fullest. Margarita Mondays, Taco Tuesdays, the works. But when the fae prince appears to call in his favor, Joey has no choice but to live up to the bargain she made and leave Wine Wednesday in her wake.

The ruse is simple. Play Robin’s mortal fiancé in exchange for wiping the slate clean. But the more she learns about the tricksy fae bachelor, the more Joey becomes convinced that the fae prince is hiding something…something that only magic can illuminate. Does Joey have what it takes to untangle herself from the fae or will she lose herself to them forever?

The Fae Side of Forty is the second entry in the Magical Midlife Misadventures paranormal women’s fiction series. If you like relatable characters, magical twists, and laugh-out-loud humor, then you’ll love Jennifer L. Hart’s endearing tale.

Buy The Fae Side of Forty and fall in love with magic now!
Goodreads * Amazon

“Only my pride.” I rolled over and glared up at the fae. “Robin? Did you just trip me?”

“Don’t be daft.” He held out a hand and after a moment’s hesitation, I took it, allowing him to pull me to my feet.

“Then what did I…?” My voice faded out as I stared at the dislodged solar lamp that had somehow appeared between one thought and the next. A few steps ahead, another one glowed. Then another. They trailed around the walkway just as I’d imagined. “That’s funny, I was just thinking that getting some of those lamps would be neat.”

“Were you then?” Robin’s gaze narrowed. “Were you thinking or were you wishing?”

“What’s the difference?” I frowned up at him.

He took my hand in his and then examined my scraped palms. “Thought might be something idle, a notion there and gone. But a wish, a wish takes vision, imagination. If you can see, it can be.”

My lips parted. He’d said that to me once before, back when I’d been trying to become my own faery godmother and learning how magic worked. “So what, you’re reading my thoughts somehow?”

He shook his head. “I don’t have that power.”

I thrust my index finger toward the lit cottage. “Then how do you explain that?”

He took a deep breath and forced out the words as though they hurt him to say. “Lamb, I don’t have my magic anymore, because you have it.”

“My magic. All of it. Out of the two of us, Joey Whitmore, you’re the only one who could have made this happen.” 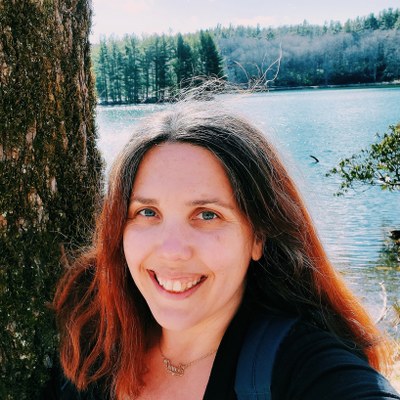 Follow the tour HERE for special content and a giveaway!
$25 Amazon gift card,
Autographed hardcovers of both books
– 1 winner each!!
a Rafflecopter giveaway