Welcome to my stop on the tour for The Legend of Black Jack by A.R. Witham! Read on for more details!

The Legend of Black Jack

Jack Swift can tell you every element on the periodic table, recite Treasure Island verbatim, and would remember in perfect detail every word you’d ever say to him. He has been alone for a long time, so he has buried himself in books, using them to plan his escape.

But no textbook could ever prepare him for the land of Keymark.

At 3:33 a.m. on his fourteenth birthday, Jack is kidnapped by a hideous monster to another sphere of existence. Now there are two moons in the sky, and he is surrounded by grotesque creatures and magical warriors training for battle. They want the impossible: Jack must use his abilities to save a life or be trapped in this bizarre world with no chance of rescue.

Jack doesn’t have secret magic, a great destiny, or any experience.

So why do they all expect him to become a legend?

The operating room was anything but sterile. The floor was pounded-down dirt, the walls were splintered wood that collected dust by the handful, and the smoking fire in the corner exhaled nearly as much soot into the room as up the chimney. It was dark, it was dirty, and it put the odds against Jack Swift before he even began.

Jack had two concerns, other than the obvious: that Xiang-lo would die the moment he touched him. The first worry was the anesthesia. Dr. Richards had told him repeatedly that in almost any surgery, the drugs used to put the patient to sleep were by far the most dangerous part of a procedure; more men had been killed by a tiny slip in the amount of medication used than from any mistake a surgeon made. The gas passers, as Richards called them, were the background heroes of the operating room, and kept their patients walking the thin line between sleep and death.

Jack had made the calculations for the correct amount of anesthesia, but in the end, it proved unnecessary. Memphis would keep Xiang-lo asleep. Such majik was well within the monster’s mastery, said Valerian, and keeping Xiang-lo out of consciousness and out of pain would be the rhino’s task during the procedure.

The second concern was more personal. “I don’t want to see his face.”

Valerian nodded as if he had been expecting the request. “That has been arranged.”

Good. So the knight understood. “Not just his face,” continued Jack. “I don’t want to see any part of him other than his belly on the right side. There are medical sheets in Memphis’s bag; cover him with those. His chest, his legs, but especially his face. I don’t want to see it.”

Surgery was just like carpentry. Jack had to remember that. But the only way to treat a man like a block of wood was to remove his face, remove his personality, remove any trace of humanity from him…and even then, he would still be a Pinocchio.

If everything went well, Jack would love to hear about Xiang-lo, about who he was, what his dreams were, and how he’d lived his life. But right now, all Jack wanted to know, all he could know, was where to cut.

Besides, some darker part of his mind chided. You don’t want another face haunting your dreams when you kill him.

A.R. Witham is a three-time Emmy-winning writer-producer and a great lover of adventure. He is the world’s foremost expert on the history of Keymark. He loves to talk with young people and adults who remember what young people know.  He has written for film and television, canoed to the Arctic Circle, hiked the Appalachian Trail and been inside his house while it burned down.  He lives in Indianapolis.

If you would like a sneak peek at his upcoming work or upcoming events, please reach out to him. 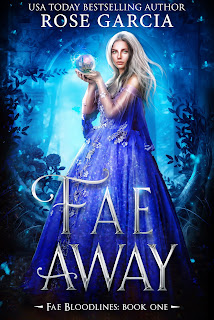 Princess Celyse has two rules she must obey— never touch a portal, and never kiss a human.

Despite being born into the most powerful house in the faerie realm, Celyse dreads her life of duty and obligation. But everything changes when she finds a shimmery portal that offers a glance at the forbidden human realm. If discovered with the portal, it could mean her death. Yet she dares to peek anyway and finds herself face to face with a gorgeous human. Soon, she is visiting her would-be enemy nightly. Until a malicious suitor threatens her life and her kingdom.

Julio can see ghosts— it’s in his blood as the son of a powerful curandera.

With spirits drifting in and out of his life, Julio thinks having visions of an ethereal girl with silver hair is another part of the supernatural weirdness that happens to him. But when the very real girl shows up in the flesh, she brings a dire plea for help. Her faerie realm and his human realm are in danger, and only he can help. His head blares a warning against this deadly path while his heart urges him to do anything to save her. Including risk his own life.

Fae Away debuted as an Amazon #1 New Release! 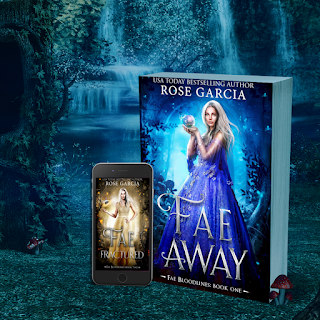 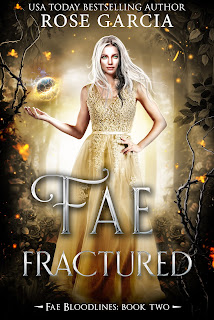 Celyse and Julio must find each other before an obsessed queen and her devious witch track them down.

Celyse has been stripped of the Strong name and sent to the dreaded Sublands. Imprisoned with a small band of loyal friends, she plots her escape so she can put a stop to the treachery of the new queen. But trickery and deceit abound, and Celyse finds herself questioning everything she knows..

Julio is ripped away from Celyse moments after he stepped through the portal. With no idea how to get back to her, he must tap into the innate powers that run through him as the descendant of a family of powerful curanderos. If he can trust in himself and his abilities, he should be able to find Celyse. If he fails, he’ll never see her again.

But the new queen’s depravity knows no bounds. She’ll do anything to secure her birthright and throne, including striking a bargain with a bloodthirsty witch who’s more than willing to do her bidding. 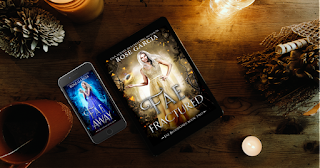 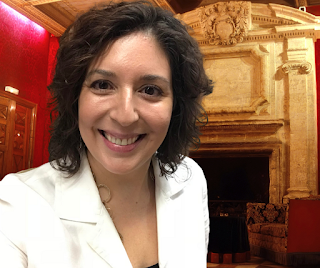 Rose Garcia is a USA Today bestselling author. She is a lawyer turned writer with a deep love of all things paranormal and is greatly is inspired by the blending of the real-world with the supernatural realm. She writes sci-fi/fantasy – with a heavy dash of romance. Rose is most proud of crafting #OwnVoices stories and is known for bringing richly diverse characters to life as she draws on her own cultural experiences. CLICK HERE FOR A CHANCE TO WIN A $25 AMAZON GIFT CARD FROM ROSE GARCIA!