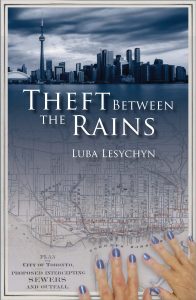 What would you do if you worked at a reputable international museum and art works listed as still missing since WWII began showing up on your doorstep?

That’s the substance of the newest urban art theft thriller Theft Between the Rains by Luba Lesychyn.

Drawing on her more than 20 years at Canada’s largest museum, Luba reintroduces many of the affable and quirky characters from the prequel, Theft By Chocolate. Also resurrected is the malicious art thief who has been on the world’s most wanted criminal list for decades.

Theft Between the Rains takes readers behind the scenes at museums and to parts unknown of Toronto. And with water being a character unto its own, Luba uses both humor and thriller elements to weave a page-turning story while simultaneously illustrating how changing weather patterns and flash flooding are impacting metropolitan centers globally.

“We are coming to yet another fascinating area of the facility. And it is one of the more recent additions to the building,” said Walter.

“Holeeeeeeeee,” said Marco. “This is straight out of some Sci Fi B movie.”

“It is something,” said Walter.

Before us were shelves full of jars – large jars, small jars, roundish jars, square jars – all containing clear liquid and specimens of every conceivable sort. I turned on my phone’s flashlight app, and the illuminated sight before me was truly haunting. Hundreds, probably thousands of fish, sea life, and land creatures floated lifelessly in their ghostly containers. Those whose bodies were turned in our direction seemed to be staring directly at us with beady eyes.

“All of these specimens are suspended in alcohol. If ever there was anything you wanted to learn about aquatic creatures, this is certainly the place to do so. Everything is organized by genus and species. They are whole specimens, and they have been stained to feature various elements. As you can see, the fish turn translucent when preserved, but with the dyes, one can make out the nervous or circulatory systems, for example.”

“I seem to recall we had no choice but to move all this off site?” I said.

“Yes, indeed. Because of their extraordinary weight, they cannot be stored on upper levels without adding costly structural supports. At the same time, if they’re stored below grade, there’s a heightened risk of explosion.”

☂️ Tell us a little about how this story first came to be. Did it start with an image, a voice, a concept, a dilemma or something else?

When I wrote my first book, Theft By Chocolate, about a woman looking for chocolate, love and an international art thief in all the wrong places, I never intended it be anything more than a stand-alone story. Just in case, I had left a few plot points open-ended and when my readers kept nudging me about a sequel, some inspiration for Theft Between the Rains came from a couple of documentary films.

When I saw Lost Rivers, a film about how cities have undergrounded their urban rivers and streams and use them as part of their sewage systems, I was reminded of the fact that the Royal Ontario Museum, the setting of my first book (and an institution where I had worked for more than 20 years), is situated above a well-known creek.

Subsequently, after viewing the documentary The Rape of Europa, about the plunder of art during World War II, I had an epiphany. I came up with the notion about what my lead character, Kalena Boyko, would do if art work listed as still missing since World War II started showing up on her doorstep. I then started to create various scenes that would tie the story to lost river settings in the city of Toronto and decided to use water and storms as the primary motif throughout the book.

☂️ What, if anything, did you learn when writing the book?

Much of my research involved going on the Toronto Green Community’s Lost Rivers walking tours and on ROMWalks, guided city walking tours led by volunteers of the Royal Ontario Museum. I grew up outside of Toronto, so I learned so much about the city’s captivating local history. And while researching art work stolen during World War II, I couldn’t believe the amount of pillaging that had taken place not just by the Nazis, but by Allied forces as well.

☂️ What surprised you the most in writing it?

It was unfathomable to me to learn that there is still approximately $37 billion worth of treasures and various forms of loot confiscated and stolen during WW II that is still hidden around Europe, including $93 million in silver and jewelry hidden somewhere in the hills surrounding the castle of Wewelsburg in northeast Germany and $100 million in gold apparently dumped in Lake Walchen near Munich.

☂️ What does the title mean?

I wanted to keep the word “theft” in the title to link it to the first book and hint at the book’s subject matter about art theft. And because so much of the story in Theft Between the Rains involves rain storms in some shape or form, whether getting caught in a storm or escaping a storm, I thought it would be a fitting title. It’s one of those titles that makes more sense once you’ve read the book.

☂️ Were any of the characters inspired by real people? If so, do they know?

Most definitely, and mostly yes. I was inspired by many of the loveable and eccentric people I worked with at the Royal Ontario Museum and I have talked to most of the people who inspired specific characters. Other characters are drawn from people that I might have known much more casually, like the museum security guard Marco who was inspired by a former neighbor with whom I lost touch years ago. And the drainer Benny or Benedetta (an intrepid subterranean explorer and keeper of buried rivers) was inspired by a good friend of mine who is a natural beauty and great at just about everything she does – I think the friend was both touched and flattered when I told her she was my muse for the character.

☂️ Do you consider the book to have a lesson or moral?

I seem to become more of an activist the older I get and I wanted to use the story to raise awareness about many different topics including climate change, daylighting urban waterways and separating them from sewage processing, and restoring buried rivers to their original purpose thereby benefitting generations to come.

In my home base of Toronto, we are seeing urban flooding like never before and, besides the fact that we are experiencing super storms due to our warming climate, we have paved over green spaces and waterways that once used to carry excess water to Lake Ontario. It’s a common phenomenon in metropolitan areas around the world and I wanted to bring attention to it because daylighting these water systems could help reduce this kind of flash flooding. As is evident, the messaging in my book comes from a place of environmentalism.

☂️ What is your favorite part of the book?

There’s a scene that takes place at an iconic water treatment plant in Toronto that was built in the 1930s. It’s a huge compound of buff brick, stylized frescoes, and arching windows, and it’s hard to fathom that this gorgeous Art Deco building is a fully functioning water filtration plant that provides Toronto with almost half of its water supply. It was a pleasure describing it in the book but, in terms of the plot, I was able to build in a lot of tension as well as humor.
I have to add that one of the final scenes in a ghost subway station (a station built in downtown Toronto that was decommissioned soon after it opened) is also close to my heart, again, for the thriller elements I was able to incorporate into the story.

☂️ Which character was most challenging to create? Why?

I had introduced Walter, the museum librarian, in the first book as a secondary character, but he plays a much bigger role in Theft Between the Rains. He is a walking encyclopedia and knows everything about a lot of things. So, I used him to bring out the history or background about places, people, and objects. But it was tricky trying to determine when his descriptions sounded false or inauthentic. I personally know people who are like that, but I wasn’t sure if most readers would buy into his character.

☂️ What are your immediate future plans?

I just recently started a new book that is quite different from the first two. It still falls into the mystery genre and is set in the world of museums, but it’s a paranormal tale about souls that meet in more than one lifetime. I’m also developing a work that will be a memoir/fiction blend about my family’s experiences as first-generation Canadians. And finally, I will soon be launching a blog series about memory and isolation inspired by the current world circumstances.

Luba Lesychyn is a popular Toronto-based mystery writer, a graduate of the Humber School for Writers, and a respected author in the library readings and events circuit.

In her two books, she draws from her more than 20 years of work experiences at the Royal Ontario Museum (Canada’s largest museum), and her time working for a private museum consulting firm to write humorous, international art theft thrillers featuring amateur sleuth Kalena Boyko. Her newest book, Theft Between the Rains, is a sequel to Theft By Chocolate (about a woman looking for chocolate, love and an international art thief in all the wrong places) published in 2012 by Attica Books and launched in Canada and the UK.

Luba currently spends her time writing and virtually touring Theft Between the Rains in which lead character Kalena Boyko returns to find herself pulled into international art theft intrigue when masterpieces missing since WWII start appearing on her doorstep. 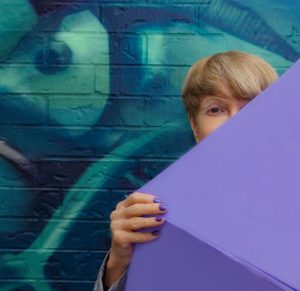 Luba Lesychyn will be awarding a print copy of Theft Between the Rains to a randomly drawn winner (US or Canada ONLY) via rafflecopter during the tour.