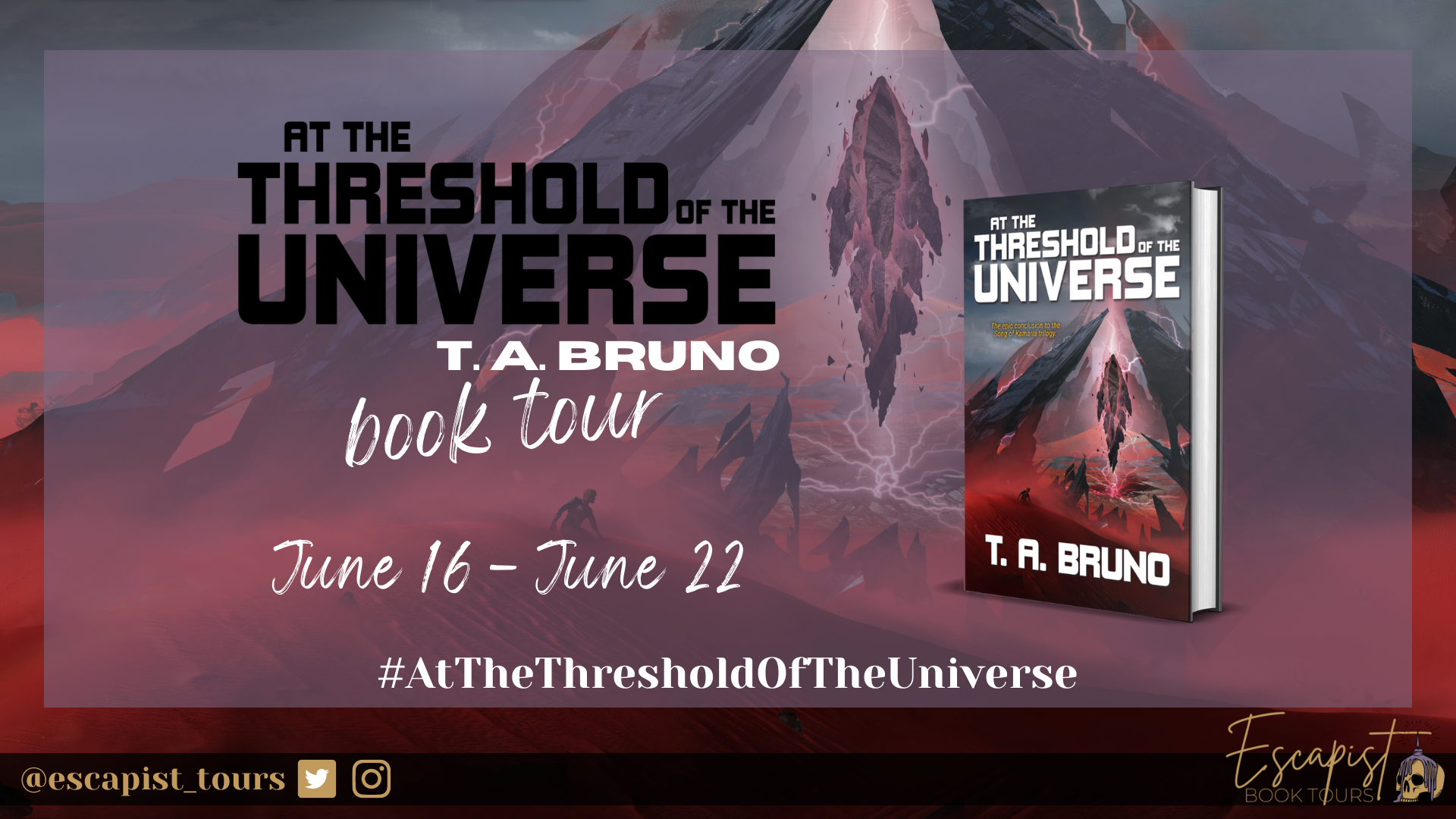 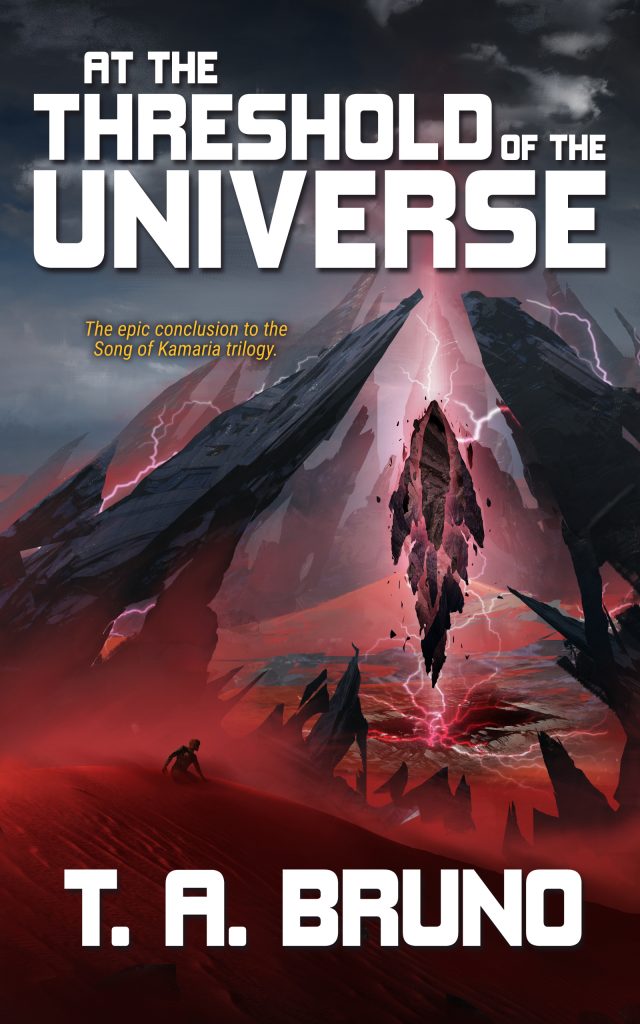 At the Threshold of the Universe
by T.A. Bruno
Series: The Song of Kamaria #3
Genre: Science Fiction Fantasy
Intended Age Group: General
Pages: 496
Published: May 31, 2022
Publisher: Feathersong, LLC (Self Published)

THE EPIC CONCLUSION TO THE SONG OF KAMARIA TRILOGY.
ALL SONGS END.

War ravages Kamaria as an old enemy resurfaces from the depths of the ocean. Offering no support in the coming battles, the Auk’nai isolate themselves in their tightly guarded Nest. Outgunned and outmatched, humanity once again trembles on the edge of obliteration.

The Castus family is torn apart. Denton fights on the front lines, hoping to free Cade from a nightmarish foe. Meanwhile, Eliana and Nella set out on a path that will change everything they understand about the Sirens. The Song will end, but who will remain to hear its final verse?

Intergalactic Planetary • Star Man • You Got a Friend in Me

Jess:  “I’ve punched enough metal walls in my days to know what it feels like to want to inhale black holes and exhale supernovas. I know what an apocalypse feels like inside your heart and how there will never be enough nukes to entirely destroy what makes you so fucking mad.”

Talulo: “Talulo thought strength came with resilience, but only weakness is so rigid. Strength comes from the will to face the fear of change and meet it directly. To move forward, unsure of each step.”

Cade: “We know the truth, and that is sharper than any blade.”

1. Tell us a little about how this story first came to be.
The Song of Kamaria trilogy began as an animated short that spiraled out of control into three full-length novels. I work in the film industry, so naturally, my gut instinct was to make the story work as a film, but I quickly discovered that it was better suited for a novel. I buckled up and prepared to write. Now, after almost a decade, we arrived At the Threshold of the Universe. This was a passion project of mine, and Threshold brings it all to an ending I hope readers really enjoy.

2. What, if anything, did you learn when writing the book?
I learned a great deal about writing as a craft and many things in life and the world around us. I reached out to people in the Deaf Community to help me make Nella Castus a loveable and authentic character. In doing so, I learned a tremendous amount about Deaf culture. It was fascinating.

3. What surprised you the most in writing it?
I was constantly surprised when side characters elevated their own roles naturally within my books. It’s almost as if they wrote themselves. For instance, Seargent Jess Combs started out as a character who only in part of In the Orbit of Sirens for one chapter. After writing her, she quickly became one of my favorite characters to write and managed to get more significant roles in Quasars and Threshold.

4. If it’s not a spoiler, what does the title mean?
It means a couple things, one more literal and one more metaphorical. I’ll let readers draw their own conclusions. I like to write titles that get readers thinking.

5. Were any of the characters inspired by real people? If so, do they know?
A few of my characters started their stories with some elements of people I know. In the Orbit of Sirens is chock full of name cameos of friends and family, even if they don’t act like the people I named them after. But I will say, by the time At the Threshold of the Universe was being written, I had stopped the cameos. No one in Threshold is really based off of anyone I know.

6. Do you consider the book to have a lesson or moral?
It has a few. I like to explore many ideas as I write. In the Orbit of Sirens was about the tug-of-war relationship between Control and Create. Quasars is about Adaptation and Harmony and how those things exist on a spectrum, not as a simple bullet point. Threshold is about Freedom and Forgiveness, but again how these ideas live in flux and what must happen to obtain any true form of either.

7. What is your favorite part of the book?
I don’t want to spoil anything, but I will say there’s a scene where Denton is with his brothers, Jason and Tyler, that really was a delight to write.

8. Which character was most challenging to create? Why?
I mentioned Nella Castus previously. I wanted to represent a Deaf character in the Song of Kamaria trilogy, and I wanted to do her justice. I got a lot of help from various people in the Deaf Community and got lots of great notes that helped make her as authentic as I could. As a result, readers seem to really love Nella, and I firmly believe it’s thanks to the help I received. They added insight I could have never thought of alone as a hearing person, and as a result, Nella truly shines the way I hoped she would. I’m very grateful to the people who gave up their free time to teach me.

9. What are your immediate future plans?
At the moment, the Song of Kamaria is complete, but I don’t believe I’m done writing about Kamaria. I have no current plans, but I hope to return when I find the right story. It would probably feature all-new characters and not tie too much into the current trilogy. But at the moment, I’m just brainstorming and preparing for Threshold’s release.

About the Author
T. A. Bruno grew up in a suburb south of Chicago and moved to Los Angeles to pursue a career in the film industry. Since then, he has brought stories to life for over a decade as a previsualization artist. At home, he is the proud father of two boys and a husband to a wonderful wife. 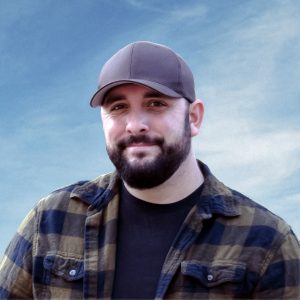