The farmer and the psychiatrist. Willow and John should have never met, much less fallen in love, but they did. Thirty years later their relationship is in limbo. When her nephew dies in a tragic fire, Dr. Willow Rider knows she has to repair her relationship with her husband and sons before it’s too late. She is a terrible mother and an awful wife but she’s an awesome therapist. Can she take her own advice and save her family?

Saint John, the oldest of the Harrell brothers, has sacrificed everything to ensure his family’s happiness. Isn’t it time he grabs his own happiness? He is willing to do anything for a second chance with Willow, even take her crazy bet. But as he makes the same stupid mistakes, he pushes her farther away.

When a motorcycle club believes the only thing keeping them from gaining control of the local sex trafficking cartel is the Harrell family, they are their town come under attack.
Willow and John’s second chance at happiness may go up in flames as they find themselves at war with the Steel Marauders. 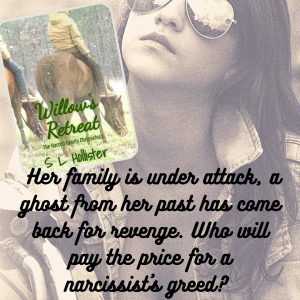 People have often asked me why I don’t write about my adventures raising six sons. I have to admit that I prefer to write their stories as fiction because no one believes the stuff they put me through if I tell it as fact. In fiction I can clean my boys up a little when I like them and make them the heroes of my stories and if they’ve pissed me off, I can make them the villains. It’s been a running joke around our house that mom will put you in her book and kill you off on page fifty, but some know they’re the smelly corpse discovered in the ditch at the very beginning of the story. Heck, it’s not even a threat anymore. My grandkids are begging to be put in my books and even telling me how I can kill them off. I mean really, where’s the threat in that? We put the fun in dysfunctional, what can I say? I have long conversations with my children and grandchildren about blowing things up and how to get rid of bodies. The holidays are never boring around our house.

Willow’s Retreat makes my eighth novel. I have been writing since I was ten years old, but I’ve only been published since 2017. I’m married to my own romantic hero, and we’ve lived several romance tropes from friends-to-lovers reunion beginning, to our second chance romance, blended family romantic adventure. After thirty years of marriage, six sons and twenty-one grandchildren we are still writing our romance book.