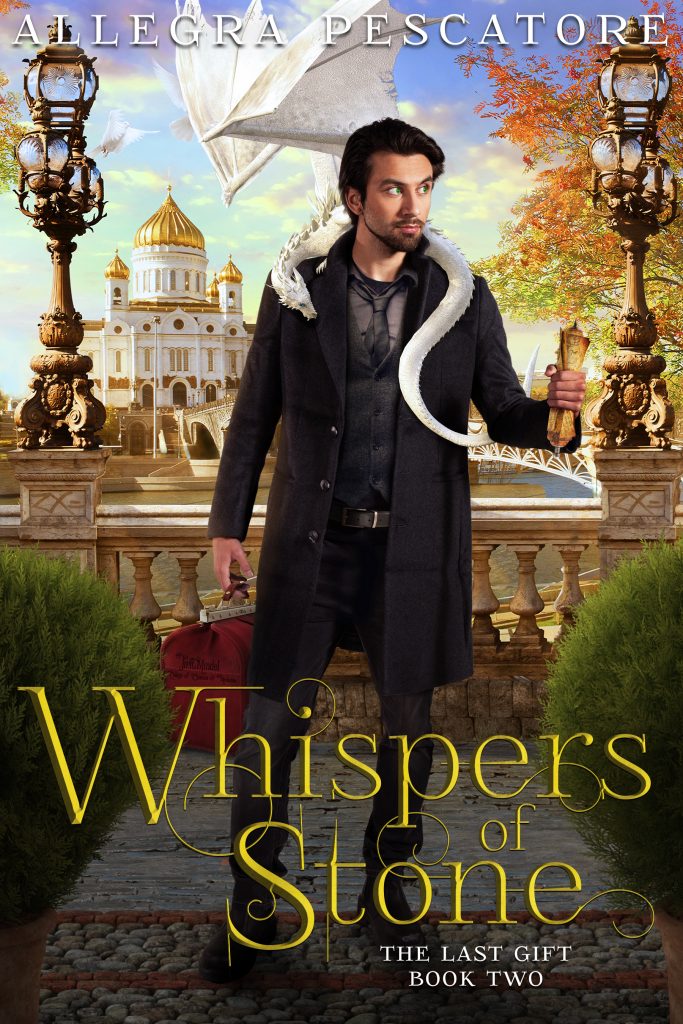 A God is Dead. A Queen is Missing. Secrets are Unraveling.

On trial for the murder of the King, Elenor and Gabriel must become allies if they want to survive. His magic is spiraling out of control, awakening a mystery hidden in the very walls of the palace. She has one month to pass her Water Rite and find a way out of the marriage her parents set up. But things are about to get much more complicated.

Between sadistic family members intent on taking Elenor’s throne, Tirit Mindel breathing down Gabriel’s neck, and a Golden Dragon appearing in the sky above the Mondaer Desert with an ominous warning, more than the Kingdom of Lirin is at stake.

If that weren’t bad enough, time is ticking down for Fedrik and Fay as well. With the desert turning against them and Daemon as a questionable new ally, figuring out how to control Fedrik’s Gift has become a matter of life and death.

Picking up in the fallout of Where Shadows Lie, Whispers of Stone is the long-awaited and non-stop second installment of The Last Gift. Dive back into the world of Dracona and hold onto your hats. Things are about to get… salty.

Author’s Note: While the Last Gift may be read as a stand-alone series, it is meant to be read alongside the other books of Project Ao.

The Suggested Reading Order is:

NACL: Eye of the Storm

I sat down at my computer to write an upbeat guest post about sequel writing. I certainly have enough to say about the subject, given that the last year of my life has been lived entirely in the soul-crushing imposter-syndrome-land of Sequeltopia. However, as I look back on the last twelve months, words seem to fail me.

I somehow didn’t expect that going in. I figured: the difficult part is over, right? The worldbuilding is laid out, the readers who liked book one already cared about the characters, and all I have to do is entertain.

Now, part of the reason it was so hard is my own miasma of health conditions. In the summer of 2021, I started having trouble breathing. Asthma that was under control for years suddenly spiraled into an all-consuming battle for every single breath. It wasn’t the war many Covid patients fought in. I’m still alive, and never once had to be admitted into the hospital, but never-the-less, my life started feeling as though it were fractured into the space between every successive breath. I was living on the razor’s edge between anxiety and exhaustion as I fell further and further behind on my deadlines.

This did not create an environment conducive to getting words written.

Do you ever drive to work, get there, and realize that you don’t remember a single thing about the drive? That was how my life felt. I’d get into bed after a long day, open my manuscript, and blankly think back on my day, desperately trying to grasp onto anything that might inspire the words to come.

But sequels are hard.

I had all these threads up in the air: plots that needed conclusions and questions that needed answers. Not only that, but I’d made a massive change at the end of Where Shadows Lie two weeks before publishing and had no idea how I’d deal with the ripples. Characters were dead who were supposed to be alive, for goodness sake! If you’ve read my books, you know they are politically dense with intricate plots. So there I was, playing three-dimensional fantasy political chess with less than two brain cells to rub together. It wasn’t working. I desperately needed a plan.

So I threw the plan I had out the window and fell back on that old but true adage: write what you know.

What I knew was that I couldn’t breathe, or think, or function. Neither, therefore—I reasoned—should my main character. Enter, the new plot!

It’s funny how sometimes, things just click. I’d spent all of book one foreshadowing that my main character couldn’t take too much stress. So why not let her—a disabled, chronically ill woman—deal with some of the same nonsense I was? And so, I wrote.

I wrote about how frustrating it is to have that buzzing noise in the back of your head when trying to think. How terrifying it is to have responsibilities weighing on your shoulders when you know that you aren’t holding it together. Sure, Elenor had to deal with a kingdom in trouble and an evil aunt, whereas I was struggling with getting to work in the mornings and remembering to breathe, but the emotions were much the same.

I poured my frustration, my fears, and my pain into her and the other characters who have become so dear to me over the years. Fortunately, as soon as the ball got rolling, some old, well-loved habits kicked in to keep it going. I leaned on my love of causal chains, playing simple ‘if this, then that’ games with the plot. That moved things forward in a logical direction, while my good ol’ workaholism kept me typing away every night despite my health problems. When my brain wouldn’t function, my coauthors and family helped, letting me bounce ideas off of them. Most of all, though, what drove me forward was the simple fact that I was too tired to get in my own way.

I was anxious about breathing, not whether the sequel I was writing was good. Looking back, I think there’s a lesson to be learned in that. Not—to be clear—that I suggest writing a book in the middle of a health crisis. Nor would I endorse letting words get in the way of rest. But getting out of my own way was the best choice I could have made.

I let go of my attachment to writing a sequel that would recapture what I did in Where Shadows Lie, and instead let Whispers of Stone… breathe.

As it turns out, that’s all I really needed.

It’s now been six months since the release of Whispers of Stone. Today, the third book of the series is out too. Each of them has been an entirely different experience, as was the sequel to A Bond of Thread which I’m currently revising. So in the end, I’m forced to draw a simple conclusion: every book—first, fiftieth, stand-alone, or sequel—is a journey, and the only way to find out what kind it’ll be is to get out of your own way and start typing. 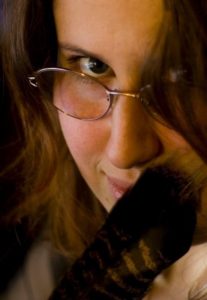 Allegra grew up in a small village in northern Tuscany as the daughter of two artists. She was raised on the works of J.R.R Tolkien, C.S. Lewis, Phillip Pullman, Frank Herbert, and many others, all read aloud to her while she drew and played make-believe. She began to write at the age of eight and hasn’t stopped since.

After many moves and dozens of countries visited, she now lives in a cozy cottage in Western PA. She is accompanied in her current adventures by husband Job, co-conspirator and long-time writing partner Tobias, and a small army of furry and scaly pets. When not writing or daydreaming, Allegra rules her kitchen with an iron first and feeds everyone who walks through her door. She also gardens, dabbles in various art forms, and spins stories for her tabletop gaming group.

As a disabled woman and staunch LGBTQ ally, Allegra hopes to write engaging, diverse, and representative Fantasy and Science Fiction, where people who do not often see themselves center stage get the chance to shine.

One Reply to “Spotlight & Guest Post: Whispers of Stone + Giveaway”