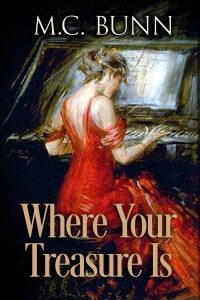 Where Your Treasure Is
by M. C. Bunn
Genre: Historical romance, Victorian romance

Feisty, independent heiress Winifred de la Coeur has never wanted to live according to someone else’s rules—but even she didn’t plan on falling in love with a bank robber.

Winifred is a wealthy, nontraditional beauty who bridles against the strict rules and conventions of Victorian London society. When she gets caught up in the chaos of a bungled bank robbery, she is thrust unwillingly into an encounter with Court Furor, a reluctant getaway driver and prizefighter. In the bitter cold of a bleak London winter, sparks fly.

Winifred and Court are two misfits in their own circumscribed worlds—the fashionable beau monde with its rigorously upheld rules, and the gritty demimonde, where survival often means life-or-death choices.

Despite their conflicting backgrounds, they fall desperately in love while acknowledging the impossibility of remaining together. Returning to their own worlds, they try to make peace with their lives until a moment of unrestrained honesty and defiance threatens to topple the deceptions they have carefully constructed to protect each other.

A story of the overlapping entanglements of Victorian London’s social classes, the strength of family bonds and true friendship, and the power of love to heal a broken spirit.

Chapter 2
A Fool and His Money Are Soon Parted

Approaching the right turn that would take him to Swift Street and the Royal Empire Bank, Court Furor concentrated on traffic. Cold bit his cheeks and hunger gnawed his belly, but he ignored both through force of habit. The soles of his boots were thin and his gloves pointless…No point worrying about what the day would bring, never mind the next one…He was a man of no prospects and no property but preferred to think of it as freedom from responsibility…It was no secret he fancied himself a bit of a lad though he wasn’t overly tempted by long, romantic entanglements. An hour or two with a willing girl would suit…

He directed the horse to a slow walk, trying to secure a place in the queue for the curb. In the gleaming brougham beside him sat a woman, her face hidden under an enormous, bright green hat trimmed with black ostrich feathers. Her driver signaled, and Court tugged his reins…Though a thick veil covered her face, Court caught a glimpse of golden hair, coiled in heavy masses on her shoulders. The wind lifted the edge of her mantle, and he was briefly amazed by the brilliant green of her dress…She’d obviously never missed a meal in her life.

The characters in Where Your Treasure Is came to me in a flash. My father had been dead for several years. My mother and I had spent the summer cleaning her house and clearing their offices, so we’d shared hours sorting through business documents and family mementoes. It was August and nearly time for me to return to work. I had been reading. A man and a woman’s voices, then their faces just happened. It was like a darkened theater had suddenly lit up, though I could still see my book and the yard. Their argument threatened to disintegrate into a physical altercation. Poof—it was gone. After a couple of weeks, I saw the end of their story in much the same way, only I was walking my dog. I spent the next four months chasing after Winifred de la Couer and Court Furor, their friends and their families, trying to document what happened to them.

What I always told my students and what my teachers always told me, that writing is re-writing. Not the first draft—that was so exciting, I bolted through it. The challenge was acknowledging my early readers’ feedback, then my editor’s, to expand scenes or cut and re-order others without changing the essential plot. I also set aside Treasure’s second draft for a few years and wrote several more books in the series before finally circling back around to revise it again.

What I learned by waiting, then rewriting the book several years later. Treasure is a historical romance, a late-Victorian love story, but by the time I’d finished the other books, I’d realized there were themes I wanted to bring forward in Treasure that had emerged and were important in the other stories. As I strove to flesh out Winifred and Court’s characters, the minor characters’ personalities and significance to the plot simply bloomed. I’ve always loved old books where the “quality” and the “common folk” interact, the gods and the mortals, the high and the low—the mingling enriches and changes everyone’s point of view.

It’s an allusion to verses in Matthew and Luke, though this is not a Christian romance novel. I don’t want a reader who enjoys that genre to be misled by the title or shocked and offended by some of the book’s contents. Court and his half-siblings grow up in the Old Nichol and learn to read at a slum school run by missionaries. All the major characters and several of the minor ones have a person or dream they cherish, rightly or wrongly. What they’re willing to risk to hold onto or to obtain their “treasure,” and how their lives collide and are transformed while they do so, is what the story is about.

All of these characters are fictional. You can believe that if you like. No, they’re fictional.

Love is the greatest power on earth. Wedded to Truth, it’s a force that transforms even the most hopeless lives.

Ah, I’m not going to tell because it’s a spoiler! It’s also related to the second half of my answer to your last question. I’m supposed to say the love scenes, but I also really enjoyed the boxing and horse races!

George Broughton-Caruthers, Winifred’s handsome neighbor, long-time friend, and rogue. He’s part of a love triangle or two. I didn’t want readers to simply write him off as a third wheel, an impediment to true love’s course, or a simplistic villain. There are several very bad boys in this book. He’s one of them! He’s also a very complicated man.

I’m excited to promote Where Your Treasure Is and hope I’ll be able to share what I learn about the process with others. I also look forward to revising the second novel in the series, a late Edwardian, World War I historical romance, Time’s Promise. It brings back many of Treasure’s major characters and explores their children’s coming of age. 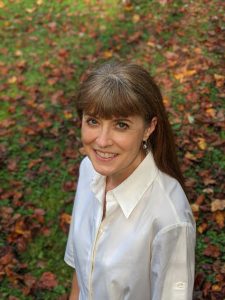 M. C. Bunn is a writer of Victorian romance and historical romance novels, a singer (in the indie rock band Mister Felix), and a songwriter. She holds an English degree from UNC-Chapel Hill and a master’s in English from North Carolina State University.

“I’ve always loved writing. It’s a joy to do what makes me happy and to share it.

“My father was a great story-teller. He read to us at the dinner table and passed on his love of history. He’d haul me out of bed in the middle of the night if there was a great old movie on the late show, and family trips always included visits to historic sites. His father was born in 1888, and I have Granddaddy’s letters to his bride-to-be in my dresser. I’m working on the story of Daddy’s first ancestor in America. It’s set in Jamestown, 1690. My mother’s grandmother was placed in an orphanage after the Civil War because her father died on the way home, so I always felt that connection to and had a curiosity about the past. Both of my parents read to me before I could walk. Daddy gave me Dickens, Twain, and Stevenson. Mama put the dictionary in my hands and let me watch I, Claudius and Shoulder to Shoulder when they first aired on Masterpiece Theatre. She told me I’d be a writer one day.”

Acting was another girlhood passion. “I wanted to play all the characters in the books I’d read, or in the stories I made up, like Dickens and Louisa May Alcott did. I also wanted to be an archaeologist because we knew one who worked on digs in Israel. There was never a time when I wasn’t making up a story, and it was always set ‘a long time ago.’ What I really wished for was the car in Chitty Chitty Bang Bang, so I could fly back in time and see what it was actually like for women in Victorian and Edwardian England.”

When she’s not writing, she loves reading long old books. “I love Anthony Trollope’s series, and Anna Karenina. Of more recent vintage, I really enjoyed The Forsyte Saga and The Raj Quartet.”

Her idea of a well-appointed room includes multiple bookshelves, a full pot of coffee, and a place to lie down and read. To feed her soul, she takes a walk or makes music with friends. “I try to remember to look up at the sky and take some time each day to be thankful.”

She lives in North Carolina with her husband and their dog. Where Your Treasure Is is her first published novel.

M. C. Bunn will be awarding a $25 Amazon/BN GC to a randomly drawn winner via rafflecopter during the tour.

9 Replies to “Spotlight & Excerpt: Where Your Treasure Is + Author Interview & Giveaway”