It is not a standalone story. It is the fifth book in the Food Truck Warriors series. 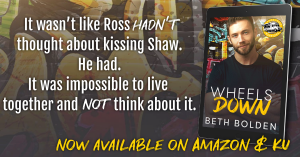 Shaw isn’t his friend—until Ross discovers he’s so much more.

Ross Stanton is having a bad week—a bad month—really, a bad year. But the last thing he wants, after the betrayal of his friend and business partner, is for anyone else to know just how much he’s fighting for survival.

He’s struggling to keep his food truck and to maintain appearances, but what Ross doesn’t realize is that Shaw Finley, the bartender from the Funky Cup, has seen right through his charade.

Shaw offers the couch in his apartment over the bar, suggesting that saving money on rent might help salvage Ross’ failing prospects.

Even though he doesn’t really consider them friends, Ross discovers that Shaw is great to talk to, easy to look at, and he likes him. Late nights and lazy mornings and evenings with only the polished wood of the bar between them lead to an attraction that Ross can’t deny—and that Shaw doesn’t even try to.

But falling in love isn’t as easy as falling into bed together, and Ross isn’t even sure what he feels is love, until he figures out that it couldn’t possibly be anything else.

Shaw removed his glass, replaced it with a full cup of water and ice, and then a moment later he was back, with a plate full of delicious-smelling food.

“Steak and mushroom hoagie, with horseradish aioli,” Shaw said, depositing it in front of him, “and our famous sweet potato fries.”

“They’re famous?” Ross wondered, even as he realized he had heard people talking about them.

“According to our Yelp reviews,” Shaw said. “Can I grab you anything else?”

Ross was about to ask for napkins, because the sandwich looked absolutely delicious but also messy, but then one appeared next to him, like Shaw had known he’d need it.

“I think I’m good, thanks,” Ross said, and picked up the sandwich. It had a surprising heft to it, and he had to give Jackson and Shaw credit—they’d revamped the kitchen and the work they’d put in showed. When he took a bite, he was even more impressed, half a dozen flavors exploding across his tongue as he chewed spiced sliced steak working in perfect complement to the earthiness of the mushrooms.

“You’re nodding over there,” Shaw said, his voice teasing. “Is that a good or a bad thing?”

“Am I really that notorious?” Ross asked, before he thought better of it. He ate a handful of sweet potato fries and they were really good too. “That picky?”

“Not exactly notorious,” Shaw said, returning to slicing his lemons.

Shaw sighed and put down the knife.

“You’re gonna get me in trouble,” he said with resignation.

Ross almost told him to forget it. After all, hearing the truth was probably not going to be all that enlightening and might actually make the next few months of living together uncomfortable.

Shaw smiled then, and it wasn’t the same smile he gave to all the random guys at the bar. It was softer, sweeter, more genuine somehow. Ross had never seen it before, and it hit him somewhere deep, a place where he hadn’t felt much of anything in years.

Maybe the last time had been when his grandmother had smiled at him, over pots and pans and pie dishes.

“You gotta know that you’ve got the best food at that whole lot,” Shaw said. “Objectively. The other food there is good, don’t get me wrong, but those guys? You know why they keep you at arm’s length? They’re all terrified of you, though they’d rather die than admit it. You’re brilliant. You should be working in the best, the fanciest, the most expensive restaurants, and instead you’ve got this food truck and it’s just amazing. Every time I go to Basket, I’m blown away.”

“And,” Shaw continued, leaning over, his blue eyes twinkling again, and Ross’ breath caught in his throat, “you’re gonna get me in trouble, because Jackson would have my ass for not thinking Alexis serves the best food on the lot.”

A lifelong Pacific Northwester, Beth Bolden has just recently moved to North Carolina with her supportive husband. Beth still believes in Keeping Portland Weird, and intends to be just as weird in Raleigh.

One Reply to “Book Blitz & Excerpt: Wheels Down + Giveaway”