What happens when a warrior priest from a strict religion meets a free-spirited priestess from a new age commune? Jade and Selena are as different as two people can be, but to facilitate an alliance between their worlds, they engage in a cultural exchange. With their galaxy in danger from a planet that wants to conquer or destroy all others, they realize the importance of their assignment, but it is difficult for a warrior priest and a nonviolent priestess to understand each other. Selena is both attracted and appalled by his old school masculinity, and Jade is tempted to break his vow of celibacy until marriage due to his powerful desire for her. Will this unlikely pair not only find common ground, but unconditional love? 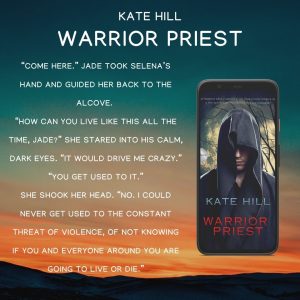 “This is our last stop before the ceremony,” Ari Tobias said.

They walked through the courtyard to where dozens of priests engaged in hand-to-hand combat. Some wrestled, others kicked and punched, and others dueled with machetes.
They paused in a circular area where three priests attacked one.

“That’s Ari Jade.” Ari Tobias nodded toward the priest who fought the three. “He’s among those being honored at the ceremony today.”

Tall and broad with long limbs, Ari Jade moved like a predator. His braid lashed behind him as he defended against the attacking priests. The severe hairstyle did nothing to hide his remarkably large ears. His high-collared black uniform clung damply to his lithe, powerful body. A red-haired priest grasped him from behind, and he easily tossed the man onto his back and struck him in the stomach just seconds before spinning and kicking the second priest. The third lunged at him and for several seconds they traded blows before the redhead kicked Ari Jade’s legs out from under him. He landed with a grunt, partly breaking his fall with an extended arm. He kicked two priests and twisted to avoid a punch from the third.

“Is something wrong, Elspeth?” Ari Tobias asked, a smirk in his voice. His gaze fixed on the dark-haired priestess.

“I’m sorry, but I don’t understand how all this bloodshed fits with religion.”

“Probably because our religion is quite different than yours. Whereas you’re upset by this, your companion seems fascinated.”

It took Selena a moment to realize that he’d been referring to her. For some strange reason, she couldn’t keep her gaze from Ari Jade. There was something almost savage about him. Some might consider his heavy features ugly—except for his eyes. They were dark, almond-shaped, and more intense than lasers. A faded scar—like a slice from a dagger—cut across his right eyebrow. He both frightened and fascinated her.

A gong sounded and the priests stopped training. At that moment, Ari Jade turned and stared directly into Selena’s eyes. A shiver ran down her spine again, but this time it was as much from desire as from fear. Ari Jade unsettled her, but she wouldn’t allow him to intimidate her. She stared back at him, refusing to break contact no matter how much she wanted to look away.

The red-headed priest punched Ari Jade amiably in the shoulder, drawing his attention away from Selena. Grateful for his distraction, she released a pent-up breath.

“It’s time to prepare for the ceremony,” Ari Tobias announced and led the way back to the temple.

Elspeth followed close behind him, but Selena hung back for a moment, her gaze fixed once more on Ari Jade. He turned to her. His dark, almond-shaped eyes narrowed and his lips twitched in an animal-like snarl. To drive off her fear and discomfort, she again noted the size of his ears and decided that she would now think of him as Ari Donkey. She couldn’t keep from smiling, and Jade scowled, their gazes still locked.

“Coming!” Selena hurried to join the others. Kate Hill is a vegetarian New Englander who started writing many years ago for pleasure.

When she’s not writing, she enjoys reading, watching horror and action movies, working out, and spending time with her family and pets.

She also writes under the name Saloni Quinby.