This post is part of a virtual book tour organized by Goddess Fish Promotions. Ann Jeffries will be awarding a $25 Amazon or Barnes and Noble GC to a randomly drawn winner via rafflecopter during the tour. Click HERE to see the other stops on the tour. 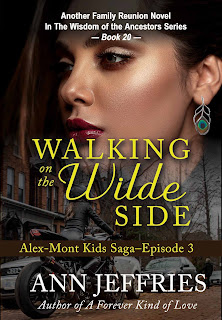 Wealthy reporter Simon Wilde is a former US Navy SEAL who uses his position to cover his covert action for a secret world enforcement agency. He returns from three months of a covert mission in the Middle East and Africa to find three murdered victims in his home. One of the deceased is a former lover of his.

DC Police Detective Eve Montgomery, a former Coast Guard Officer who is also a pilot, has just closed a complicated drug case resulting from months of undercover work. She is looking forward to taking a few days off to rest and relax. As one of the top cops in the Washington, DC, Police Department, she is called in to take point on the murder of three people in the home of a reporter.

When drive-by shots are fired at Wilde and Montgomery, Eve determines that it’s best to hide Wilde away from anyone who might be gunning for him. While Wilde recovers from gunshot wounds, he and Montgomery work together to try to figure out who killed the people in his home and why someone is trying to kill him.

Surprised by the gesture and quick service, he thanked the man and planned to make his way to a cab stand when he heard someone say, “Over here, Wilde child.” Leaning against her chauffeured Bentley and thumbing through her iPhone, Simon looked up to see Veronica Henderson Wilde. A smile lifted a corner of his mouth as he approached her. She angled her head for his expected kiss on her cheek, but never stopped scanning her text messages.

“Hi, Mom. This is a surprise. How did you know I was coming home today?” Her ever-faithful driver, Mr. Harrell, took his duffle and put it in the trunk.

“I’m your mother. I’m omniscient. I know everything.” Opening the rear car door for him she trailed him into the car and once seated said, “Someone saw you running like a track star through the airport in Niamey, Niger, and noted which flight you were on. Pictures of you are all over the social media sites. Good form, I’d say, but, of course, you take after my side of the family in that regard. The Scots were always better at track and field in the Olympics than the Irish. On your father’s side, they’d stop in a pub and have a lager of dark beer with a lemon wedge along the way in a ten-K race while our winners played Scotland the Brave at the finish line.”

He laughed at his mother’s joke and believed it to be true. His paternal relatives owned pubs all over Ireland and parts of the east coast of America. However, his maternal Scottish relatives were dyed-in-the-wool politicians. His maternal grandfather, in his seventies, a government minister, was still considered a firebrand by the Scottish Parliament. first minister, designated by the Parliament, required approval by the Queen of England before he could be seated. He ruled the devolved powers of the Scottish government with an iron fist defying the crown in areas of education, agriculture, health, and justice. Veronica Henderson Wilde was a chip off her old man’s block and considered a skillful agitator in the US House of Representatives for the benefit of her constituents.

“The press and news media are camped out in the airport awaiting your arrival,” his mother continued. “The last story you posted has everyone talking. Your father would be spastic and apoplectic if you gave an interview to a competitor before he has an opportunity to have you interviewed on one of his Sunday magazine talk shows. I dearly love your father, but at the moment, I want to continue to have a good sexual relationship with him. If he’s paroxysmal, sex with him might be problematic. So, now that you’re home, he’ll start the promos and teasers for your appearance right away on his network, then he’ll be responsive when I jump his bones. You’re scheduled to do Let’s Talk About It live on Sunday at 1:00 P.M. He asked me to tell you he expects your byline before the Friday evening edition of the news.”

Simon smirked and got comfortable in the roomy back seat, stretching out his long legs. Tilting his head back against the seat cushion, he closed his eyes as the car began to move. He would meet those deadlines with no sweat.

Ann Jeffries, the critically acclaimed author of the Family Reunion—Wisdom of the Ancestors Series, is a native of Washington, DC. As an only child, she enjoyed the benefits of a private school education at Allen in Asheville, North Carolina, and a public education at the University of Maryland. Ann began writing fiction for her own amusement.

Ms. Jeffries is the recipient of many awards for leadership and public service. A keynote speaker at colleges, universities, conferences, and conventions, she has extensively traveled the North American continent, Asia, and Europe. Among other endeavors, she is an entrepreneur, an avid supporter of public television, a genealogist, and a voracious reader.

Her pride and joy are her family, particularly her Fabulous Four grands. She lives in Maryland and South Carolina.

Ann’s novels are available in both e-book and paperback. Her autographed copies can be found through annjeffries.net and also un-autographed on Amazon.com and barnesandnoble.com.

25 Replies to “Spotlight & Excerpt: Walking on the Wild Side + Giveaway”