This is my post during the blog tour for The Willing by Lindsay Lees. In The Willing 15-year-old Gypsy Capone soon will be considered a woman. To save her body and even her soul, Gypsy chooses a dangerous path—to single-handedly confront this scary and unpredictable world.

This blog tour is organized by Lola’s Blog Tours and the tour runs from 16 August till 5 September. You can see the tour schedule here. 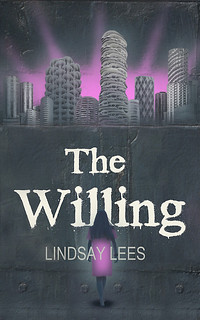 Blurb:
In less than a year, fifteen-year-old Gypsy Capone will be considered a woman in Ovoidia, a “utopian” city-state where every woman can be approached for immediate sex by any man, where curving architecture adds weird whimsy, sporks are the only cutlery, and true intimacy between the genders is a sign of suspect subversion. After all, if a woman just plays along, she’ll also do her job and have children, with the reward of a fine home in the “Communities,” where she and the other “Mamas” live together in harmony with everything they need. Right?

The irony: Diam and Isis, the two leaders of Ovoidia, are themselves females. Fun, yes! And just below the surface, perversely sinister. They personally execute these precise sacrifices by women to establish their “happy,” absurdly totalitarian utopia, and are backed up by their chosen army of male “crusaders,” enforcing a crime-free, fully controlled society.

Men are relegated to work in the “City” where they may “enjoy”—right there on the street if they wish—any woman they want and are welcome to satisfy their sexual and emotional needs at establishments called Gaje Clubs where only the most “gifted” among women are chosen to work.

Not surprisingly, in Ovoidia women have evolved until they feel nothing of sexual pleasure. But in Gypsy’s deepest heart, she realizes her own dark secret: she is the exception. Next she discovers to her horror that her secret, if known, could result in the ultimate punishment—genital mutilation.

To save her body and even her soul, Gypsy chooses a dangerous path—to single-handedly confront this scary and absurd world. She has the support of her allegiant sister Sadie and Miles Devine, a rogue, secretly gay crusader, and also “Doctor,” a morally questionable physician to help her. But none of them fathom the levels of paradox, incongruity, and twisted evil they will soon face, and the ride becomes something even Gypsy could have never imaged.

Excerpt Ch. 2 – Doctor
In a basement meeting room of the Head Gaje’s oval-spiral Headquarters, an arched doorway slid open. Doctor Gino’s tired, wrinkled eyes also bolted open; he had only been resting them. He’d practically been dragged from his bed, after all. Ovoidia’s Chief Crusader, Rigby Katz, entered the hermetical, bleach-white room holding his round helmet, nestled under his thick, toned arm. Eyes bright and vigilant—a caffeine glow—he must have only just finished his shift, Doctor thought. He had been a Crusader for over thirty years but had the good fortune of not appearing his age. Rigby scanned the room like a robot from Robocop or Terminator, one of the Pre-Ultimate Revolution movies. After completing a thorough assessment, he surveyed the white leather office chair where Doctor sat with his liver-spotted hands folded on the round table.

“Oh good. I’m not the first to arrive.” Crusader Katz clomped in wearing heavy black boots, clean as the day they were made. “Gives me anxiety waiting around, wondering if I’m at the right place. Easy to get lost down here.”

A round clock above the arched doorway swept past the seconds. It was almost three A.M. Doctor hadn’t expected the tribunal meeting to take place so late.

“Do you know why we’re having the meeting now?” Doctor asked, casually.

Rigby regarded Doctor with amusement, rather like the way a mama looks at her child when she asks where babies come from. “Yes, the Head Gajes had an inauguration party to attend.”

Doctor yawned. So much for not having time to get a coffee. About the Author:
Lindsay Lees is originally from Los Angeles and holds dual citizenship in the U.S. and the United Kingdom, and while growing up and later in college, she split her time between the two countries. Lindsay earned a B.A. in 2008 from Manchester Metropolitan University, and next an M.F.A.in Creative Writing from California College of the Arts. The Willing is Lindsay’s debut novel. She currently lives a quiet Southern life with her husband and a houseful of pets.

Giveaway
There is a tour wide giveaway for the blog tour of The Willing. One winner wins a $20 Amazon or Barnes and Noble gift card (winners choice). 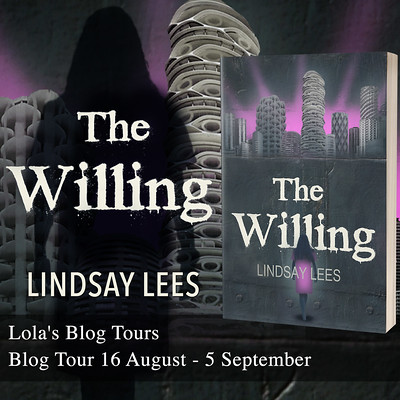