Is it a standalone book? Somewhat. Jake Blaine is the MC in this book, and it’s a semi-followup to Rape in Holding Cell 6, a book I wrote with his lover, Antony, as the MC…but it’s not absolutely necessary you read that book to follow this one (tho’ it might help, at the beginning).

When his uncle disappears, Jake goes to Palm Springs to find out why only to get caught in a web of fear, hate, betrayal … and what looks more and more like murder … with Jake targeted as the next victim.

Was it murder? Suicide? Or did Owen Taylor vanish to avoid prosecution for rape? Everyone had their own idea, but the only note he left behind was sent to his nephew, Jacob Blaine, in Denmark … which was crazy, because Owen knew Jake was currently living in the States.

Of course this happened at the worst possible time for Jake. He was helping his lover, Antony, fight bogus criminal charges; his estranged, anti-gay mother was battling cancer; his job in Copenhagen wanted him to return there — now; and worst of all … Antony was pushing him away. It was tearing him apart.

But Uncle Owen had backed him up through some rough times, so Jake made what he thought would be a short trip to Palm Springs, to see if he could find out what happened. He re-connected with Dion, his first true love, and then he discovered other men had also disappeared. On top of that, an organization called PSALMS was spreading hate and distrust of the gay community as part of their plan to turn back gay rights.

The more Jake dug into Owen’s disappearance, the more he found lies, deceit and treachery by members of the police force, people in the DA’s office, and even some of Owen’s friends. And behind it all was someone who would do everything they could to keep their true motives hidden.

Even have Jake vanish, as well.

This is from the end of Book 1, Part 4, where Jake has Antony and their techie-roommate, Matt, do some research:

They read the message and Matt did some cross-referencing on his diamond-sharp laptop as I spoke, popping in with, “Okay, got that here,” and, “It fits.” He also found a chart showing Warren Philby had a ninety-five percent conviction rate and was talking about running for Riverside District Attorney in the next election. As a Republican with a Tea Party bent.

Already I hated the prick.

That’s when I noticed Tone looking at me with his quiet, wary expression, so I snarled, “You don’t believe my uncle’d molest a kid, do you?”

“No.” He frowned like he was insulted I’d even asked him that question.

“I dunno. It just doesn’t line up with…well, your father called your mother, asking about your uncle’s condos and — “

“Four. One he lived in; three he rented out. He also owns some other property.”

I nearly fell off the chair. “My mother called you?”

Tone blinked and looked away. “Uh…looking for you. I…I told her you were…you were out of the country.”

Man, I should’ve gone to see her the second I got back.

He sighed. “She knows why you’re here. And she…she said stuff like, That’s just like you, to let people drag you down. Then she gave me her number and address — “

“She sold her townhouse? She loved that place.”

“Just telling you what she told me,” Tone said. He gave me a slip of paper with a phone number and address.

“This is south side,” I muttered.

Tone shrugged. He wouldn’t know, but my mother was one of those types who only want to live around acceptable people. In her eyes, Southside was…borderline…at best.

“Matt, we’ll be right back.” I went around the counter, took Tone by the arm and guided him up into the bedroom, then closed the door, sat him on the bed and kneeled before him, looking hard into his eyes.

“Y’know, I had lunch with Mira. Is there anything you want to tell me?”

He hesitated then looked straight back at me, his eyes sharp as cut diamonds. “That therapist I’m seeing…that the state’s making me see. I…I asked him to talk with her. Told him she’s a psychologist and has a clinic in Paris and…and I wanted her to know everything that happened was on me. Not you.”

“She already knew that.”

“…Maybe. This verified it.”

“And you talk about me not tellin’ you things?”

“Great defense. So what’s in those notes?”

He looked away. “You already know everything in them.”

I took a deep breath. “Tone…what. The fuck. Is goin’ on, here?” He just stared at the wall. No expression. I took his face in my hands and made him look at me. “Okay, whatever it was that my mother said to you — keep in mind…that bitch kicked me out of her home when I was seventeen. I haven’t seen her since, so what she knows about me and who I am is zero. Zip. Nada. Anything she says is just her messin’ with us.”

He shrugged me off and said, “But she’s right. You wouldn’t be here except for me.”

“You’re right, you little shit — I wouldn’t. I’d be fresh out of jail. Or still livin’ in Nana’s house. Barely existing. I’d never have met my brothers and sisters in Paris, or gotten to work with my Uncle Ari, or become a Danish citizen. I’d be an ex-con. But I’m here, alive, because of you. So what. Did. My mother. Say. To you?”

“Just…just what I told you.”

“Bullshit!” No response. I sighed and sat cross-legged on the floor. “You don’t wanna talk, don’t. But this is a woman who told her only child that she hates him bein’ queer.”

“Maybe…maybe you shouldn’t go see her…“

“I got to. Somethin’ is goin’ on with my uncle and the only way to get the truth of what she knows is a face-to-face.”

He ran his hand through my hair. God, I loved it when he did that. Then he whispered, “Should I stock up on alcohol?”

I sighed from the emotion in his voice and nodded. “Twelve-pack. No, fuck it — Tequila.”

“I’ll get some mixers and we’ll make a nice queeny night of it. A Christian, a Muslim, and a Jew had a party…“ He snorted. “Sounds like the setup for a joke.”

His hand whispered over my cheek and his eyes grew hurt, again. “My all-American mutt.”

All I could think to say was, “Don’t let mom mess with us, Tone.” He ruffled my hair then got up and left the room.

I leaned against the bed. He’d lied to me. My mother’s crap comments weren’t bad enough to rip him up. There was definitely something else going on in his head, and he’d used them as a wall to hide behind.

Well…sitting on the floor wasn’t getting anything done. I got up, got dressed, and headed over to the insurance company where she worked. I wanted a professional environment around us, in case things got nasty, because she was damn well going to explain to me what the hell she was pulling.

Only it turned out she hadn’t worked there in nearly three years.

Man…I had a lot of catching up to do, with her. 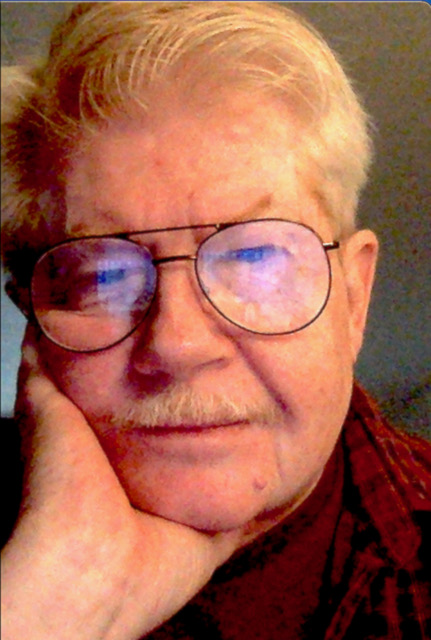 Kyle Michel Sullivan is a writer and self-involved artist out to change the world until it changes him…as has already happened in far too many ways.

He has written books that range from sunshine and light (“David Martin”) to cold and dark (“How To Rape A Straight Guy”, which has been banned a couple of times) to flat out crazy (“The Lyons’ Den”) to mainstream (“The Alice ’65”). He has now ventured into SF-Horror-Suspense with “The Beast in the Nothing Room” and taken Capitalism to its logical extreme in “Hunter”.

He is currently working to complete “A Place of Safety”, his Irish novel; “Darian’s Point”, a gothic horror story set in Ireland; and “Dair’s Window”, about an artist trying to rebuild his world after the death of his lover.

Kyle uses Tolstoy as his guide, and is trying to build characters as vivid and real as possible. He has a lot of fun doing it mixed with angst, anger, and amazement… but that’s the lot of a writer. 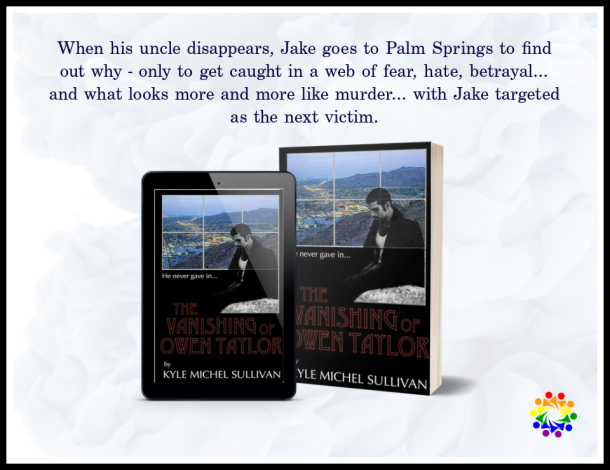 One Reply to “Book Blitz & Excerpt: The Vanishing of Owen Taylor + Giveaway”