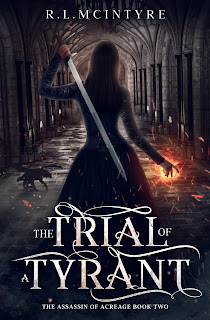 The Trial of a Tyrant

The Assassin of Acreage, #2
by R. L. McIntyre
Genre: New Adult Dark Fantasy
Publisher: Indie publishing on KDP
Date of Publication: 4/24/2021
ISBN: 978-1-7365182-3-6
ASIN: B08WX7TYJ1
Number of pages: 370
Word Count: ~ 90,0000
Cover Artist: Getcovers
Nothing cuts deeper than the truth.
Putting a tyrant on trial could cost everything.
Serena, the great Death Sparrow, saw the sacrifices made at Bathon. She knows to dethrone the Tyrant King would require more than even she is willing to give. The only advantage Serena has left is her magic. As she begins to explore this part of herself, the ever-watchful gaze of the General follows her. He knows that his son Wesley, and her are involved, and relishes in this new game of cat and mouse. It isn’t just Serena who is ready to do anything for her friends. Wesley will risk the same to see his father stays far away from Serena, but he cannot stop the King alone. Together they must keep nine lords alive during the trial or risk the gallows ending everything.
Serena vows to do the unthinkable at every turn. Bow before the Tyrant and his General, play the role of a court Lady and use her magic in secret to give them a fighting chance. However, in this game of secrets, it isn’t only the King’s that are under scrutiny.
The Shadow Heir is coming, and he knows everything about the Death Sparrow and her friends, including her magic.
Amazon

Serena scowled as she worked on Wesley’s tattered back. The General’s hand, his father’s hand, was crueler than even she realized. He was in considerable pain but hissed through his breaths with controlled ease. Her anger rattled her breaths as she grabbed the nearby bandages.

Wesley sat up on the bed turning to face her. He removed the remains of his shirt leaving her face to face with his naked chest. Several white scars decorated it, but her eyes rested on the well-formed mountains he had for muscles. His abs were perfect. His whole body reminded her of a warrior God. A blush grew on her cheeks as she remembered feeling his muscles through his shirt, but now she could see them without interference. She sucked in a breath, trying to focus on the task while her eyes wandered every inch of him.

A smirk crossed Wesley’s face. He gently grabbed her hand, pulling her closer.

“Do you like what you see?” He held her hand against his chest. She could feel his muscles shift with his every breath.
It ignited a warmth in her stomach she tried to control.
Her face flushed, and she pulled back steadying her breaths. “Stop distracting me,” she said, unrolling the bandage and holding it to his chest as she reached
around him to wrap his back. He placed his hand over hers. The warmth of the
touch drew her eyes to his. The look in them held her still. Without words she
could feel his every thought. The blush on her cheeks grew as the fire in her
stomached grew even hotter.

“Are you sure you want me to?”

Serena took a deep breath that filled her nose with myrrh. She nearly whimpered at how it only seemed to make things worse but still she pulled her hand away. She focused on the bandages. The soft, cold bandages. The feel of his naked body against her arms continued to fluster her. His breaths seemed to pull her closer as she tried to finish quickly. Wesley grabbed her waist and pulled her tight. She tripped into him, her momentum almost knocking him onto his back. He chuckled, holding her close as his arms wrapped around her. She glared down at him, while a playful grin covered his face as he looked up at her.

“I fear I am a distraction.” He smirked.
Daryl left the room as she bent her head down towards his, so her lips hovered above Wesley’s. There was a hunger in his eyes. She felt it too, but she refused to let him know so easily.

“I may be distracted,” she said, letting her eyes drop to his lips before gently licking her own. He edged up towards her. “but it isn’t enough for me to lose focus.” She pushed him back a smirk gleaming on her lips as she returned to the bandages. Wesley sat stiffly, almost pouting as she finished. His eyes carefully watched her ever move. She began to wash her hands in the basin when he bolted up behind her and snatched her waist. She yelled out, his warmth and presence keeping her assassin instincts at bay as he spun her, pinning her between the pole of his bedframe and him.

“You’re finished now. So, stop teasing and kiss me,”

“We both know I cannot order you to do anything.”

She smirked and leaned up to him. His lips laid on hers. A gentle kiss that filled her with a warmth that chased away the darkness that suffocated her heart. He kissed her harder, igniting the hunger she barely kept at bay. He pulled her waist tight, drawing her even closer to him. She gasped at the sensation, continuing their kiss as she moved her hands to his neck and cheek. She carefully avoided his back as she tried to feel as close to him as possible. Her hands wandered as his possessively held her still.

“Can you please not,” said a voice. She looked at the door, lust heavy in her eyes as she saw Sam. Her stomach dropped as she understood what he just saw.

“I know you chose him; I’d just not like to see it. Now I was here on business, not pleasure like some people.” He said coldly.

“Sam, that isn’t what-” she started feeling the pain that was in his eyes. It felt like tiny shards of glass piercing her skin.

“Enough, Serena!” he snapped angrily. “I don’t have anything to say to you.” She flinched at those words. The pain quickly turned to anger as she moved past Wesley to Sam. He would not talk to her like that. Of all people he knew better.

She shoved him back into the parlor. He stumbled catching himself before he fell.

“Don’t disrespect your better. You want to keep things all about business. Fine, then remember who is above you, Viper.”
She growled. He glared back at her.

“Fine Sparrow, but I wasn’t here to talk to you. So, if you don’t mind.” He growled, turning to Wesley.

“What do you want?” Wesley asked, an edge of annoyance in his voice. She wasn’t sure who he was annoyed at.

Sam looked at Wesley’s bandages and scoffed. “I’ve figured out how I can help. I want you to add me to your guards.
Once I’m in, I can get into the King’s personal guard. I’ll earn his trust.”

“Can I trust you to not stab me in the back?”

Sam let out a cynical laugh. Serena felt more on edge with that laugh. Her muscles primed for an attack.

“Trust? Is that how you convinced her? I don’t need you to trust me. I can do this without your help if I want, but we all decided on a plan. I just need you to work with me. I’ll repay the favor.”

“That doesn’t answer the question,”

“You truly do not understand assassins.” He looked at Serena a look of mockery on his face. “We do what we must for our own gains. Why she stands by your side is as perplexing as why the moon shines when the sun is out. It is useless.” Sam stepped closer to Wesley who stood stiffly glaring at him. “Do you see yourself holding onto the things you want without my help? A few months from now summer will be in full swing. It will be the perfect time for an invasion, especially since Acreage won’t be sweltering hot like the Samorians are used to. Can you really refuse me?” His eyebrows raised to match his smirk.

“Viper,” Serena warned. Sam rolled his eyes and looked at her.

“I won’t hurt your toy. I refer to your station as long as you keep it, but the moment you lose it I won’t,” he warned.

She took a deep breath, knowing what he meant. If Gwayne heard of her relationship with Wesley, she’d lose her standing in the assassins. Gwayne would destroy her. If Sam didn’t attack her first. Looking at him, she wasn’t sure if he was still her ally or just a convenient blade hired out of necessity. When the necessity ended, was he willing to turn against her? Seeing the pain and anger in his eyes. She knew the answer was yes. So, she needed to make sure he still needed her regardless or she would suffer the fallout.

“You should remember if you want your name cleared you need me.” she retorted.

“Then perhaps when we no longer need each other, I can sever the heart you’ve so enjoyed stabbing.” She felt the pain in her own heart as if he stabbed hers. She held it back. “I expect to be added to the guard’s tomorrow. Be sure it’s done,”

He left the room falling into silence. Serena stood still a few moments calming herself. She still cared for Sam. They grew up together. He was her first everything. His pain was her pain. For so long pain and love had been the thread connecting them. For their history to stop controlling her future she could have to sever their bond, but not until it was safe.

“I should get back to Helen’s. We all have work to do.”

“I’ll walk with you,” Wesley said, throwing on a new white shirt. She looked over at him and sighed.

Wesley watched her walk to the door.

“Make sure to rest,” she said as she opened the door. Wesley closed the distance between and pressed the door shut. His body nearly draped over hers as she stood looking at the door.

“Serena,” His hot breath caught in the collar of her shirt sending shivers down her spine.

Her knees felt weak hearing those words. She inhaled deeply the scent of myrrh reminding her he was behind her. Not that she could forget. His heat was suffocating, and she didn’t care that her lungs refused to work.

She wanted to be lost with him. Lost from the world full of problems she needed to fix.

“Stop.” She said forcing herself to think and not give in. Her body and heart roared against her mind. They refused to be ignored but staying would make everything more dangerous. The General could find out. That thought alone warned her that this was not the time to forget what must be done.

“Not tonight.” Her voice nearly wavered. “There is work to be done, and if I stay…” She couldn’t finish the sentence. She opened the door and Wesley stepped back letting her walk alone into the halls. Serena focused. There was no time for distractions. 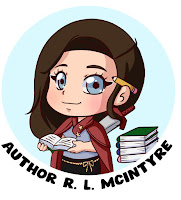 About the Author:
R. L. McIntyre is a new fantasy YA/NA writer, from the Philadelphia area, who debuted February 27th, 2021. She is a fan of all things medieval which includes her own personal sword collection. She strives to write complex and realistic characters using her knowledge of psychology. When not curled up with a book and her fur babies you’ll likely find her out on an adventure looking for her next big inspiration.
Website
Facebook
Bookbub
Instagram
Goodreads 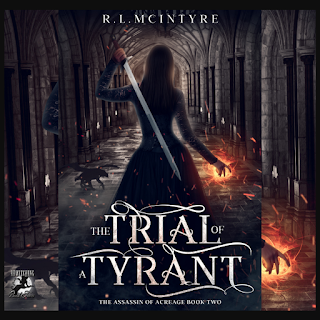 4 Replies to “Book Blitz & Excerpt: The Trial of a Tyrant + Giveaway”