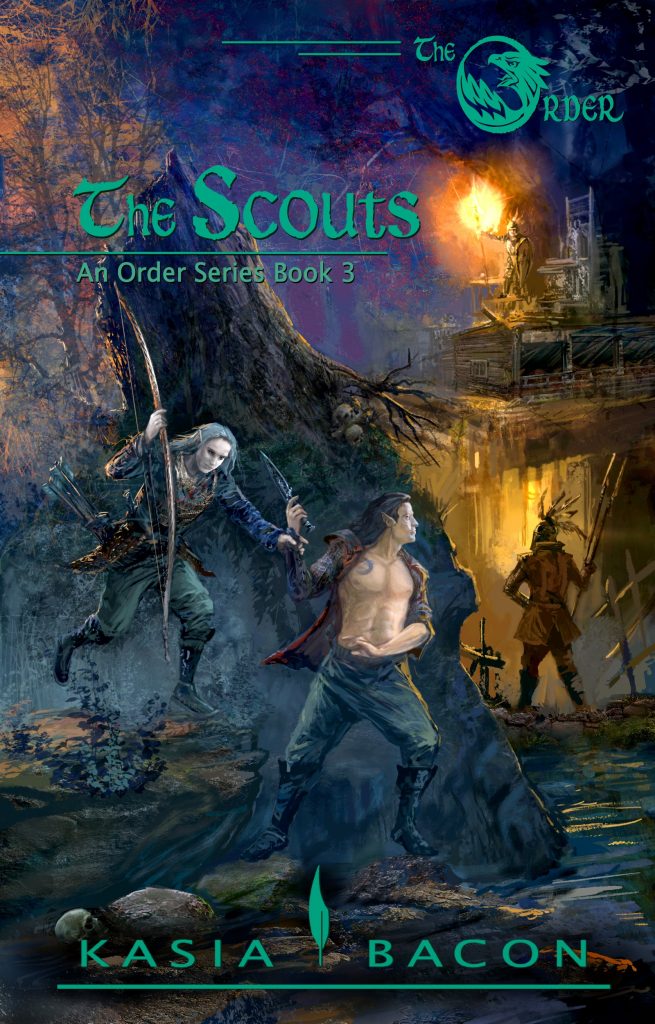 The Scouts
The Order, #3
by Kasia Bacon
Out April 22
LGBTQ, M/M romance

Lochan and Ervyn—an assassin and a sharpshooter—remain in service to the queen as part of an elite reconnaissance unit.

The Scouts are ghostlike. Elusive. Deadly.

They strike at enemies of the Crown without mercy. They get the job done, leaving no loose ends or witnesses. When Magic Supremacists threaten the safety of Elven Country, they do their duty—whatever it takes.

Lochan and Ervyn belong to each other, but will serving together as comrades-in-arms strengthen their bond as lovers or tear them apart?

The Scouts is the third book in the Order Series. In this volume, Ervyn loses control, Lochan stops fighting his feelings and Verhan… well, remains Verhan. 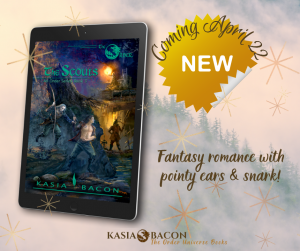 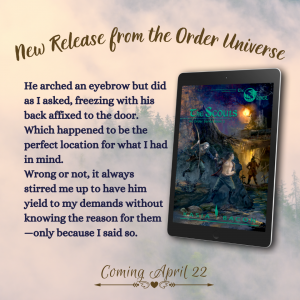 The commander looked oddly out of place, towering over his fancy serpentine bureau finished with rosewood veneer. In contrast with his tall and brawny physique, the dainty piece appeared to belong to a dollhouse furniture set. It seemed about to collapse beneath the bulk of his elbows alone. The fussy taste of the room’s previous resident must’ve gone together with a slighter frame.

“Take a seat,” Heinnés said by way of greeting, sounding as brisk as always.

Ignoring the creaks of the armrests, I squeezed myself into one of the delicate chairs opposite the desk, leaving the other for Lochan.

The commander’s hazel eyes seemed to have taken on a darker hue in the candlelight, his braid shining copper. He pressed his index finger to his lips and remained silent.

We left him to his moment of reflection, waiting to be addressed.

Heinnés had a ruggedly handsome face with a square jawline. He emanated the air of a leader, inspiring instant trust—the kind of authority that soldiers followed on gut instinct without hesitation. Save for the queen’s consort, he counted amongst the best swordsmen in the land, and his devotion to the unit never wavered. Loyal, just and strict made for a good combination of traits in a commanding officer.

I’d liked Heinnés from our first encounter. Even though—as I’d learned on my own skin—he lacked a sense of humour to a painful degree. Painful for his subordinates who thought it a grand idea to dick around, in particular. As the evening unfolded, however, my fondness for him underwent a severe test.

Just as the prolonged pause began turning notable and uncomfortable, Heinnés shifted in his seat and rubbed his neck.

Something about the commander’s demeanour alarmed me. He offered me little eye contact while studying Lochan with a puckered brow.

Sensing Lochan tense beside me increased my edginess all the more.

Heinnés reached for a bottle of mead. Droplets of the amber liquid splashed about when he poured a generous measure into each of the three ceramic cups lined up on his desk.

My eyebrows rose at this highly irregular treatment.

Invited by the commander’s hand motion and following his example, we lifted the cups to take a sip.

“We’ve got a development,” Heinnés said in a gruff tone. “I know what the baroness is after.”

My sense of foreboding intensified. “Sir?”

Heinnés sighed. “There’s no good way to say it.” He took a long drink and sighed once more.

Lochan and I exchanged a fleeting glance at this bizarre stalling.

The commander’s lips formed a thin line. “She wants Féyes,” he finally announced, exaggerating every word.

I waited for the rest of the sentence, but it never arrived. Silence filled my ears. Finally, I had to speak. “She wants Féyes”—I gestured for Heinnés to elaborate—“to do what, sir? Dance her a jig? Carve her a figurine?”

When the commander finally fixed his attention on me, it came with a cautionary glare. “She wants his company for a night, Morryés. I leave the details to your imagination.”

My jaw dropped. Incredulous, I jerked my head towards Lochan as if he could explain this absurdity. 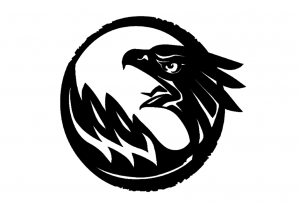 A linguist and an avid reader with a particular fondness for fantasy and paranormal genres, KASIA BACON lives in London with her husband. When not tearing her hair out over a translating project, she writes stories about the shenanigans of emotionally constipated assassins and sexy Elves. Otherwise, she can be found shaking her loins at a Zumba class, binging on anime or admiring throwing knives on Pinterest. A lover of MMA and Muay Thai, she also enjoys nature and the great outdoors. She dreams of becoming independently wealthy, leaving the city and moving into her wooden mini-manor—located in the heart of stunning forests resembling those of the Elven Country depicted in her tales.

For excerpts, free stories and updates about new projects, sign up for Kasia’s newsletter.

2 Replies to “Spotlight & Excerpt: The Scouts, by Kasia Bacon”