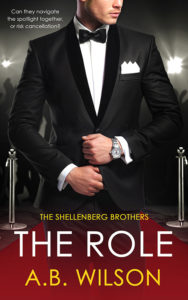 The Role, by A.B. Wilson

Thrown together on the set of a failing TV show, Alina and Markus must navigate the spotlight together as a couple or risk cancellation.

Rebuild. That’s Markus’ plan after a disastrous role and explosive public breakup with the girl he thought was The One. The bit part he originally agreed to take on after losing a bet now seems like his last opportunity to pull his career back from the brink. When he walks onto the set, he finds a TV show on the verge of cancellation and the paparazzi circling like vultures watching for what—or who—he’ll try to do next.

When Markus is introduced to the director’s muse and the show’s on-location assistant producer, Alina, sparks start to fly and the two strike up a tentative friendship among the lights and cameras of the gossipy set. The ambitious and hard-working Alina has zero interest in getting sucked into Markus’ celebrity gossip drama, but she may not have a choice as one disaster after another befalls the set.

A chance screen test and some serious groveling by the show’s director leads to Markus and Alina taking on major roles in a desperate attempt to save the show from network cancellation. Now in front of the camera, Markus and Alina are bound together as love interests and the line between private and public starts to blur. As life begins to imitate art, Markus and Alina get ground to dust by the celeb gossip mill seeking the ‘real’ story behind the two of them. If they can come back from this and save the show, they’ll be the next Hollywood power couple.

“Cut! Again, from the top!” Michael Burch’s exasperated demand echoed through the hot, humid Savannah night. Again. In that very specific tone that always led to threats of firing, alligator tears and requests for cold compresses. We weren’t going anywhere until his perfectionist, directorial ass was damn well satisfied. It could be hours.

We’d been on set since five in the morning and it was going on midnight. Cast and crew alike looked like they’d been ridden hard and put away wet. To be fair, we should have known it was going to be a rough one when he’d demanded that we “seize the day and chase the light” as we assembled before sunrise, clutching our coffee cups like zombies.

I glanced around and found everyone staring at me. Humidity-induced split-end halos around everyone’s head and sweat stains for days. Alina, save us. You’re our only hope, they silently implored.

They weren’t wrong. In addition to being one of the underpaid, overworked assistant producers for Southern Gods, Michael had decided that I was his ‘official’ muse of the season and thus responsible for inspiring him. All because I’d given him a small handful of ideas that had played well with the network folks and he’d decided that having a muse meant he was a legitimate artist. It was truly ludicrous, but as one of maybe two people Michael listened to these days, I was probably the only person within a hundred miles who could come close to putting out tonight’s dumpster fire.

The last few weeks on location in Georgia had been brutal with the unrelenting July heat and an unfortunate, possibly sexcapades-based injury that had sidelined our lead actor. With him out, I’d scrambled, shuffled and sweet-talked the senior producers to rush a much-anticipated guest star to the set two weeks early. The crowning jewel for the season—German actor Markus Shellenberg, total A-lister and critics’ darling.

Getting Markus onboard in the first place had been an absolute genius move by Michael. The show was floundering and there were rumors running rampant that the network execs had us on the chopping block. We were hoping that this superstar guest appearance would keep us limping along for another season.

Accompanied by the sighs of relief and muttered prayers for sanity and hope from my fellow crew members, I approached Michael, rubbing my gritty eyes. “Michael, boss man, we’ve got to call it. The level of overtime we’re handing out is going to get us in heaps of trouble with the network, there is zero moonlight for us to work with, and I think we’re all hallucinating.”

He laughed as he laser-stared us all down. “Lazy asses,” he said semi-affectionately. “Fine. I hate overtime and you’re all useless anyways. We’ll pick it back up in a few hours.”

Muted cheers followed. Everyone started to disperse to break down the set before heading to the trailers, rentals and hotel for showers and much-needed sleep.

As the last person filed out, Michael turned to me with a stern look in his eye and a twitching vein in his forehead. “You were right this time, but don’t ever undercut my authority again. We are way fucking behind here, and Markus is showing up tomorrow. Do you have the updated shooting schedule ready for me?”

Inured to his rapid mood swings at this point, I responded, “You’ve got it, boss. Dropped it to your phone. Do you want me to forward it to the rest of the cast once you’ve approved it?”

“Thanks,” I muttered. “See you in a few hours. Five o’clock again?”

“Seize the light, Alina. We’re gonna seize it by the fucking balls, twist ‘em, and make that light our bitch.” He flounced off and I was left shaking my head trying to dislodge the disturbing visual that I knew would be bouncing around my brain like a ping pong ball, keeping me awake.

After another hour tidying up, I checked out Markus’ soon-to-be trailer to make sure it was set up correctly. It looked like his extensive rider had been fulfilled—one of the assistants had even managed to track down the weird German muesli and kefir—and I quickly buzzed security to make sure that protocols were adapted for Markus’ arrival. They confirmed and I considered passing out for the four hours until the morning’s call on the micro-suede couch in the fancy-schmancy trailer. Maybe for a second. God, I’m so fucking tired.

I slumped down and began to work out the knots in my neck with my thumbs. The last two years had been a brutal effort to climb the ladder in a completely new field and build a life in Los Angeles, a city that was equally beguiling and terrifying for this girl from the Windy City. It hadn’t been easy, but I’d clawed my way up from minimum-wage production assistant to assistant producer on Southern Gods in record time thanks to a previous connection to Michael.

After next season, for which he’d offered me an assistant director credit in lieu of my current title and muse status, I hoped I could finally cut ties with Michael and get out on my own. I wanted to focus on horror and action films—not genres that women were typically known for—and that A.D. credit would catapult me above my competition for jobs. It was rare to achieve it in as little time as I had, but I’d worked my ass off and refused to feel guilty about maxing out my connections to support my efforts.

Ping! A text from my best friend, Candace, a makeup artist on the show, pulled me completely away from the half-assed neck massage that had almost put me under.

Hey girl, you coming home soon? Wanna warn you that Ethan and Rory are here tonight. Put your earplugs in. 😉

Jealousy, amusement and exhaustion warred within me when I read her message. I loved my roommate and her completely open poly life, but the last thing I wanted to hear that night was anyone having sex. It stood to reason that if I was on a two-year hiatus from dating, everyone else should be too.

Me: Ugh, fine. Don’t they each have large personal suites for y’all to play in?

Candace: Yeah, but our place has better ambiance. Ya kno, nevermind. We’ll go to their place. Sorry for bugging you.

Me: All good. Finishing up with Markus’s trailer. Home soon.

Candace: Oooh. Maybe leave him a naked picture to welcome him? You need to get laid, like yesterday.

Me: Hiatus, remember? Men are untrustworthy assholes, relationships are for the weak. You know it, otherwise you’d be locked down with your two himbos.

Candace: Giiiiirrrrllll…watch it. Me and my himbos can still come to our place. Haha. Get some sleep, see ya in the morning – ily!

After sending her an eyeroll emoji, I pocketed my phone, stood up and stretched until my joints popped and eyes watered. My shirt rode up and I tugged it down self-consciously, not that anyone was around to see the muffin tops that had formed as I ate my way through the heavenly culinary scene in Savannah. I needed to figure out a way to get out for a hike or some climbing on my upcoming morning off, and whipped out my phone again and made a voice memo for one of my eternally updating list-making apps.

With a sigh that could have moved mountains, I reminded myself that everything was going to be fine, that these hiccups and delays, the minor catastrophes of the last week, were about to be resolved. Hopefully. Along with everyone else on set, I had been infected by a weird sense of excitement the minute we’d received confirmation that our guest star was on his way. Markus Shellenberg was a massive deal in the industry and I would have been a total liar if I said I hadn’t at least considered his droolworthy characteristics. I mean, he’d alternated between an outright win and a much-contested second place for People magazine’s Hottest Man in the World for the last five years running—and we all knew those alternating runners-up were just to be nice to the rest of the masculine universe.

I shook my head to dislodge the Shellenberg-induced cobwebs and finally made my way out of the door and into the night. So this was where my life stood—masquerading as a muse to get a step up on the ladder, battling stress pudge and the ever-changing whims of a certified artiste, and an exciting new colleague who was the hall pass for pretty much anyone and everyone attracted to men. Woof. 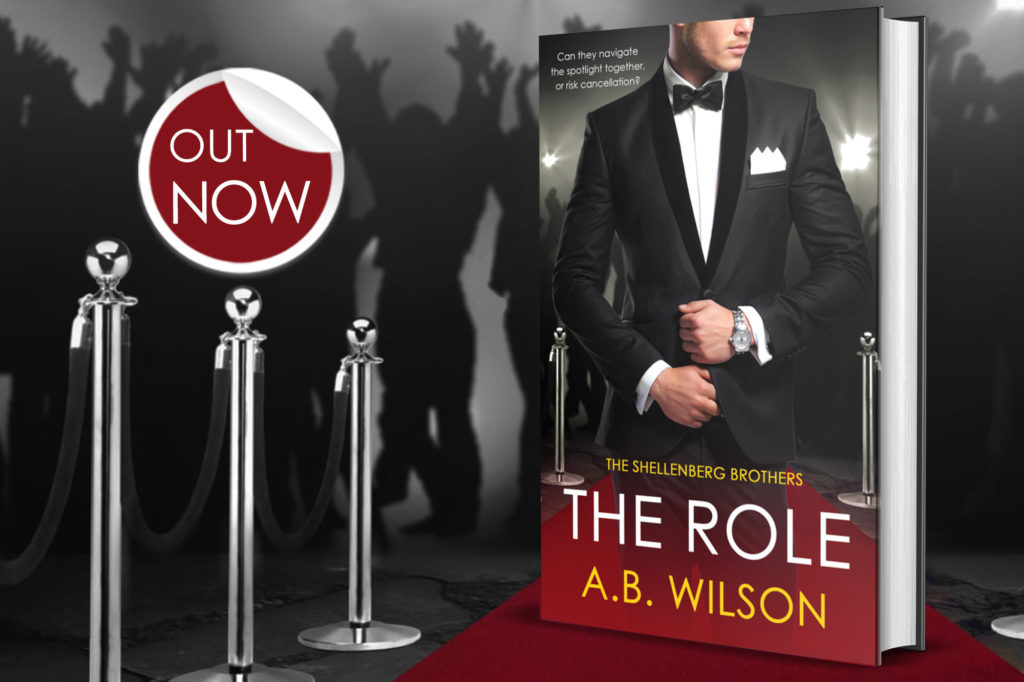 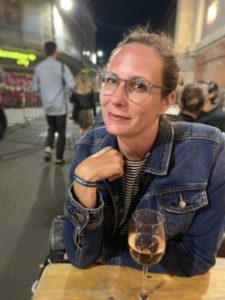 Amanda (A.B.) Wilson is the pen name for a heat-seeking librarian from the upper Midwest. Long after her sassy five year old and long-suffering husband go to bed, she writes steamy, escapist contemporary romances about celebrities, athletes, and billionaires—with a twist. Amanda loves connecting with readers, so hit her up on her website for newsletter sign-up, blog posts, general contacts, and social media.

ENTER HERE AND GET A FREE EBOOK FROM THE AUTHOR! Notice: This competition ends on 24th August 2021 at 5pm GMT. Competition hosted by Totally Entwined Group.

One Reply to “Book Blitz & Excerpt: The Role + Giveaway”