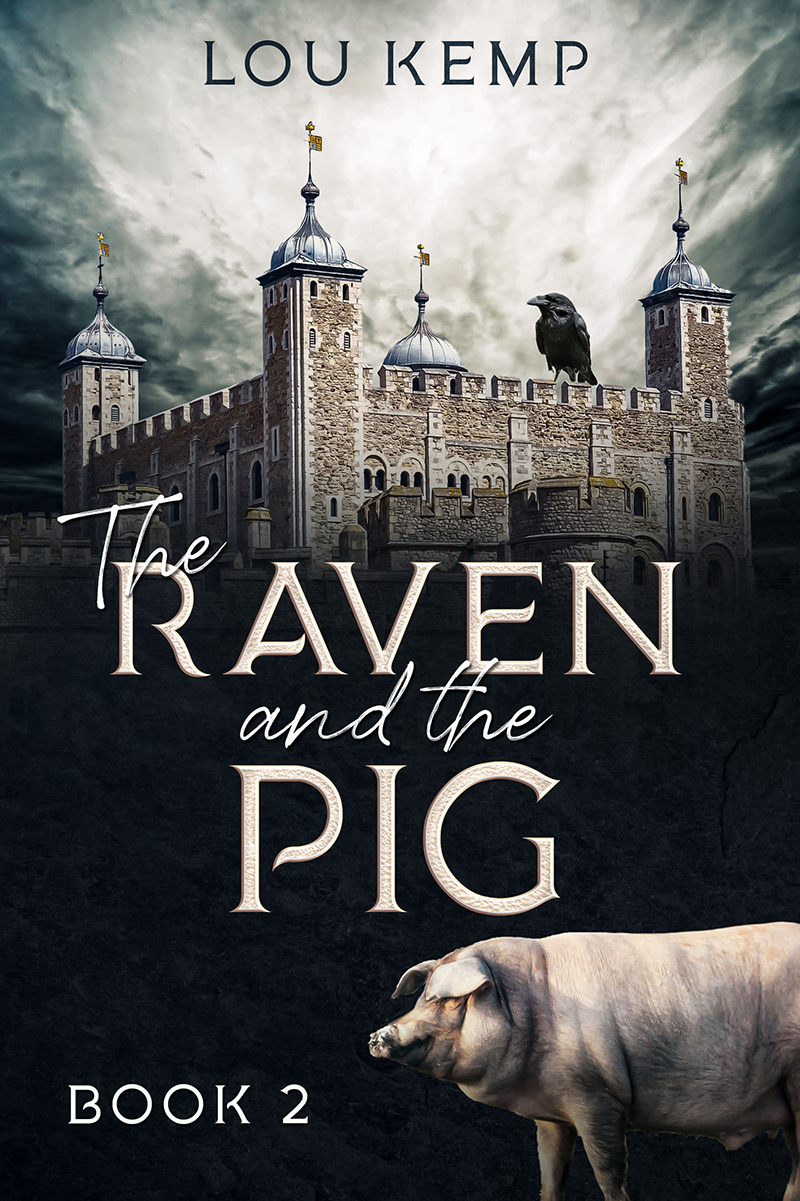 The Raven and the Pig
by Lou Kemp
Genre: Magical realism
Amazon

As the music dies, the magician Celwyn is mortally wounded.  His darker, immortal brother Pelaez brings him back, barely, with his magic. The party of protagonists travel on the Nautilus to the Cape Verde Islands and the healer of immortals.  During the journey, Professor Kang and Bartholomew can not tell if Pelaez will keep his brother alive.  Captain Nemo is ready to evict Pelaez forcibly, and keeping Celwyn alive is the only thing that restrains him.

After Celwyn is saved, the healer requests payment for his services. This sends the adventurers to the catacombs in Capuchin where their experience is one they will not forget. Before it is over, several of the protagonists question why it seems everyone from warlocks and vampires to witches, seem to be congregating in their world. Before it is over, some of them become surprising allies, and a few of their allies turn against them.

In part II, work on the new flying machine begins in earnest bringing attention from the Mafioso and a cherub-like warlock called Duncan.  After a final battle with Duncan, the flying machine is destroyed and everyone at their compound is murdered by one of their own.

Prelude
The rolling hills near Odessa, north of Constantinople 1867

With each step he took, Professor Xiau Kang sensed the intensity, and importance of what he would find. Above all, he felt the weight of his sadness. He had done his best to ignore that there was no guarantee Captain Nemo had located Thales, if Nemo failed to find him, Jonas Celwyn would be dead within a matter of days, perhaps hours.

A long time ago, on the Zelda, the magician had doubted a mechanical man could feel. Kang paused, swaying on his feet as he fought to regain his control; at this moment, the automat knew real despair, a wrenching grief that they would lose Jonas. He swallowed hard and walked faster, climbing to the top of the berm.

There she was! The long black submarine lay still in the water. A single sailor stood on patrol, and another perched in the cage on top with a spyglass.

Conductor Smith joined him as they ran back to the coach. The others had seen them and began unloading the magician onto the stretcher that Kang had fashioned for this moment. He skidded to a stop and grabbed Celwyn’s hand.

“The Nautilus is here. It isn’t far.”

In the distance, a low hum reached them; the sound sputtered and grew stronger.

The magician’s eyes opened slowly, like a thread from his memory raised his lids, impelling him to look. Everyone, including Jonas, gazed upward, as if they had already known what was to come.

The noise grew louder, and then a bright yellow flying machine crested the low hills and headed toward the estuary.

The plane swerved to the north, banked, and then flew toward them again in a wide arc.

Bartholomew wore a broad smile and his scarf fluttered in the breeze as he sailed over them. He waved. As he banked again, the engine revved and he turned, descending for another pass. Celwyn raised himself onto an elbow to wave back.

“Hurry,” Kang said. “Bartholomew is going to land. We have to get Jonas onto the ship.”

1. What inspired you to write this book?
The Violins Played before Junstan began when I wanted to write a story for the Mystery Writers of America anthology Crimes by Moonlight, edited by Charlaine Harris. It had to be something unusual, and Jonas Celwyn came to me. The catalyst was that he was a magician and immortal.

2. What, if anything, did you learn when writing the book?
I’m a better writer, and a better judge of which points of view I needed the story to be in—which one works best to propel the story or explain it.

3. What surprised you the most in writing it?
How I identify with Celwyn and the protagonists, and enjoy them. They are friends.

4. What does the title mean?
The violins represent the power behind Celwyn’s magic. Junstan was where he was supposed to deliver Professor Kang.

5. Were any of the characters inspired by real people? If so, do they know?
No.

6. Do you consider the book to have a lesson or moral?
Yes, each of the books has a strong moral thread and even stronger band that binds the protagonists together. Beginning with book 2, Pelaez’s hatred of war propels the story.

7. What is your favorite part of the book?
The scene in the forest when Nemo wakes up after an attack to find Celwyn passed out on top of him.

8. Which character was most challenging to create? Why?
I’ll answer this as the one that was the most fun since none were challenging. Pelaez is a complex, moral, and immoral, character.

9. What are your immediate future plans?
Finishing book 5.

Early work was horror and suspense, later work morphed into a combination of magical realism, mystery and adventure painted with a horrific element as needed.

I’m one of those writers who doesn’t plan ahead, no outlines, no clue, and I sometimes write myself into a corner. Atmospheric music in the background helps. Black by Pearl Jam especially.

More information is available at LouKemp.com. I’d love to hear from you and what you think of Celwyn, Bartholomew, and Professor Xiau Kang.
Milestones:

2009 The anthology story Sherlock’s Opera appeared in Seattle Noir, edited by Curt Colbert, Akashic Books. Available through Amazon or Barnes and Noble online. Booklist published a favorable review of my contribution to the anthology.

2010 My story, In Memory of the Sibylline, was accepted into the best-selling MWA anthology Crimes by Moonlight, edited by Charlaine Harris. The immortal magician Celwyn makes his first appearance in print.

2018 The story, The Violins Played before Junstan is published in the MWA anthology Odd Partners, edited by Anne Perry. The Celwyn series begins.
Present The full length prequel, The Violins Played before Junstan, to the Celwyn book series is published on Kindle. The companion book, Farm Hall is also published where Pelaez, another immortal magician and Celwyn’s brother, makes his first appearance. The remaining books in the series: Music Shall Untune the Sky, The Raven and the Pig, The Pirate Danced and the Automat Died, will be available beginning in August 2021.

40 Replies to “Spotlight, Excerpt & Author Interview: The Raven and the Pig + Giveaway”