I am thrilled to be hosting a spot on the THE MAN OR THE MONSTER by Aamna Qureshi Blog Tour hosted by Rockstar Book Tours. Check out my post and make sure to enter the giveaway! 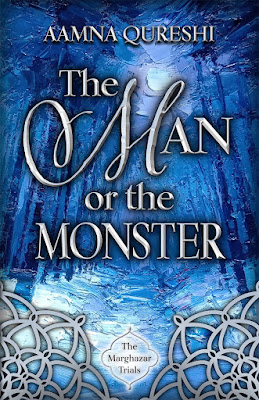 Title: THE MAN OR THE MONSTER  (The Marghazar Trials #2)

She made her decision. Now she has to live with it.

Durkhanai Miangul sealed her lover’s fate when she sent him through a door where either a lady or a lion awaited him. But her decision was only the beginning of her troubles. Durkhanai worries that she might not be the queen her people need or deserve when conflict threatens her kingdom.

Her presumed-dead father comes back with a vengeance and wishes she join him in his cause. But her family’s denial of his revenge forces Durkhanai to take matters into her own hands and she must decide whether to follow the traditions of her forefathers or forge a new path on her own.

Weeks passed. No one came to visit her, and she stopped waiting. As the weather around her chilled, she felt her heart frosting over. Faintly, she felt she had rid her system of him. Perhaps she would never feel a thing again.
But then, he came to her, while she was curled up in bed, crying.
She didn’t know how he came to be there, just that one moment she was pushing tears back into her eyes, and the next there was a body beside hers. She didn’t need to open her eyes to know that it was him.
“Come, sit up,” he coaxed, and she did as she was told. He knead-
ed the tension from her shoulders with the hard curves of his palms.
“What worries you?” he asked. She sighed in response.
“I can’t bear it anymore.”
“You can,” he told her. “And you will.”
She turned to look at him and instantly fell into a hug against his chest. She was safe.
They stayed like that for some time. She strained her ear in search of his heartbeat. But he was calm. Sure. Solid.
She pulled back, looked up at him. Gently, his fingers cupped her face like wine—he tipped her chin forward to drink, but paused at the last whisper before skin met skin.
He waited.
And so, soft as sin, she pressed her warm lips against his. He tasted like a thousand stars bursting in her mouth. His fingers murmured across her skin, cold as ice, but everywhere he touched her felt like fire.
She kissed his cold cheek. He tasted like winter: pine-needle and frost, everything that freezes your nose but warms your soul. She was inexplicably warm and closed her eyes in comfort.
Instinctively, she reached for his lips once more—only to find they were not there. He was gone.

Other Book In Series: 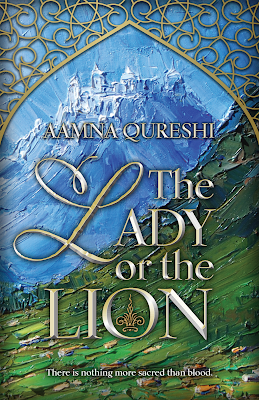 Buy Book 1, THE LADY OR THE LION now!

“He sunk his teeth into her heart and she let him.”

As crown princess of Marghazar, Durkhanai Miangul will do anything to protect her people and her land. When her grandfather, the Badshah, is blamed for a deadly assault on the summit of neighboring leaders, the tribes call for his head. To assuage cries for war, the Badshah opens Marghazar’s gates to foreigners for the first time in centuries, in a sign of good faith. His family has three months to prove their innocence, or they will all have war.

As Durkhanai races to solve who really orchestrated the attack, ambassadors from the neighboring tribal districts arrive at court, each with their own intentions for negotiations, each with their own plans for advantage. When a mysterious illness spreads through the villages and the imperialists push hard on her borders, Durkhanai must dig deep to become more than just a beloved princess―she must become a queen.

To distract Durkhanai from it all is Asfandyar Afridi, the wry ambassador who tells her outright he is a spy, yet acts as though he is her friend―or maybe even something more. 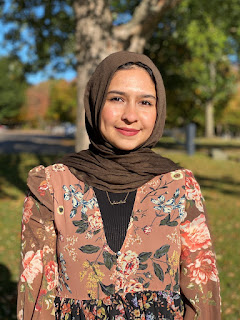 Aamna Qureshi is a Pakistani, Muslim American who adores words. She grew up in a very loud household, surrounded by English (for school), Urdu (for conversation), and Punjabi (for emotion). Through her writing, she wishes to inspire a love for the beautiful country and rich culture that informed much of her identity.

When she’s not writing, she loves to travel to new places where she can explore different cultures or to Pakistan where she can revitalize her roots. She also loves baking complicated desserts, drinking fancy teas and coffees, watching sappy rom-coms, and going for walks about the estate (her backyard). She currently lives in New York. Look for her on IG @aamna_qureshi and Twitter @aamnaqureshi_ and at her website aamnaqureshi.com.

One Reply to “Spotlight & Excerpt: The Man or the Monster + Giveaway”