Leraine has finally returned home, but the welcome is not as she imagined it. Tension is rising within the Mochedan Federation as many advocate for an end to the long peace and a return to the glory of war.

She sets off to the most important festival of the Mochedan, hoping to preserve the peace for at least a little while longer. Eurik joins her, to help his friend and to finally find the answers about his parents he’s been chasing since he left the island.

What they find is theft, murder, and a conspiracy to end their world. 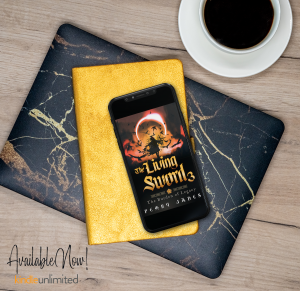 Startled, Eurik glanced over his shoulder at the blade. “We are. How did you know?”

“We’re looking for my makers, that’s the point of this whole story. Also, there were at least two carts laden with iron bars and coal we passed heading the same way we are.”

Looking past Misthell, Eurik spotted one of the carts in question. “Right. I should have noticed that.”

“You’re too focused on one thing. Or should I say, one Way. Why don’t you try Dance of the Whirlwind to find what you’re looking for?”

He hesitated for a moment as the people flowed around him. But these past weeks, what little time he’d had for training had been taken up by Silver Fang. And on the Road, even wind chiri didn’t quite work as it should.

Taking a deep breath, he reached out only to have Misthell whistle sharply in his ear. Eurik flinched away. “What was that for?”

“Because you’re starting wrong. The wind is motion, so if you’re trying to become one with the wind . . .”

He sighed. He should know this and he did. “So must I.” Eurik moved forward, arms hanging loose at his side, fingers lightly splayed, and felt for the flow of wind chiri. Though flow was the wrong word for the chaotic mess swirling around him, a chaos he added to with every step, every breath. On reflex, he closed his eyes to better concentrate on his other sense.

He tried feeling for the ringing of steel, of hammers striking hot iron. But the wind chiri shied away from his reach, his flow rebuffing those around him.

Eurik sidestepped a group walking toward them, their wake washing over him. A sharp flow snaked its way out of a tavern to his left, carrying a jaunty tune. Behind him an ox exerted himself, hot air blasting out with every huff.

Those flows he could feel, because they mixed and bounced off his own, but they also constrained his world. He pushed, wind ruffling clothes and hair, and he felt his perception expand. So did the chaos, new flows emerging within his flow while more flows beat at it from without.

The wingbeat of a lake gull, the wind blowing over the rooftops of Urumoy, hot air rising from a dozen chimneys, the staccato of a thousand voices whispering, speaking, hollering.

Eurik swayed, and a wagon wheel ground past his toes, almost crushing them. “Look where you’re going!” Opening his eyes, he staggered away as he lost his connection with the world. Out of the flow of traffic, into a narrow, shadowed alley. The air hung in there, thick and fetid. His deep breaths only set him to coughing.

“What did you do wrong?”

“I—” Another cough. Eurik shook his head. “I don’t know.” Breathing through his nose wasn’t better, only made the smell worse, but it helped against the coughing. “I tried to reach out to find the smithy, but I got swamped by the city. There was too much.”

“Wind is not earth,” Misthell said, his voice changing into a familiar one. One Eurik had not heard in months. “It is more like water, flowing from a place of abundance to one where there is absence. The wind dances to its own music, and you must dance with it if you wish to guide it to where you need it.”

Eurik blinked until his sight stopped being blurry. “You talked a lot to sesin.”

“Yeah. What, you thought I’d spent all that time in a box?”

Eurik shook his head. “Hard to imagine. I would have found you within a year or so if that were true. All I would have to do is follow the stream of complaints.”

“You mean pointed reminders. Not my fault your fleshy minds leak memories like sieves.” Pemry Janes grew up on a family-owned farm. He has had a love for history for as long as he can remember and studied it at university. Fantasy he discovered a few years later and now tries to combine the two in his writing.