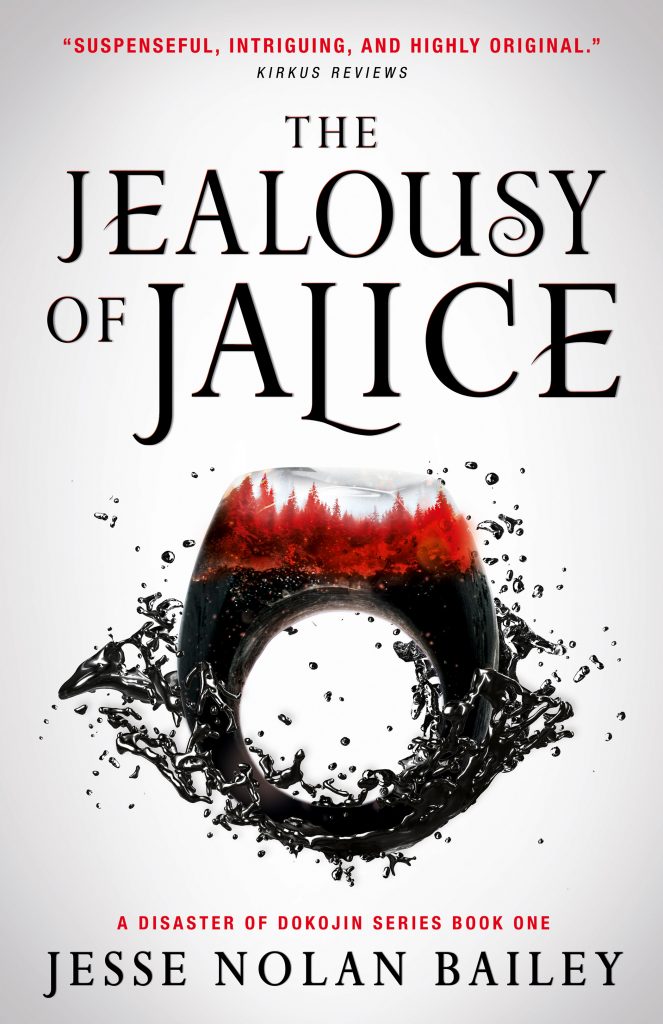 The land and its people are corrupted. The Sachem, chief of the Unified Tribes, is to blame.

It is this conviction that drives Annilasia and Delilee to risk their lives. Afraid of the aether magic he wields, they enact a subtler scheme: kidnap his wife. In her place, Delilee will pretend to be the chieftess and spy on the Sachem.

Unaware of this plot against her husband, Jalice is whisked away by Annilasia. Pleading with her captor proves futile, and she rejects Annilasia’s delusional accusations against the chief. After all, the Sachem has brought peace to the land.

Yet a dangerous truth hides in Jalice’s past. As she and Annilasia flee through a forest of insidious threats, they must confront the evil plaguing the tribes and the events that unleashed it.

See Also:
(This is our attempt at a bit of fun. We ask our authors to come up with a few short, clever, possibly pop culture laden, descriptions of their books just to give a little taste of what’s to come for readers.)

You Scratch My Back, I’ll Scratch Your Back • Memento • “I’ve Seen the Devil, Yeah, I Met Him Last Night”

“Get your stupid ass up now!”

Annilasia jolted awake at the calloused voice. She stumbled to her feet as her vision focused. The fire’s flames endured, which meant she hadn’t slept long. Her eyes fell on a lone figure standing at the edge of the fire.

“Stay back and name yourself!” she shouted.

The stranger snorted and took a couple strides forward. The dim light revealed a man with ebony skin, dressed in brown garments and furs. Dark facial hair—graced with grey roots—formed a rounded beard that faded up to a bald head past the mutton chops. Commanding eyes glared back at Annilasia.

“We don’t have time,” he said. His voice was like boots on gravel, pressed with a tone of permanent impatience and disapproval. “We need to—”

“Name yourself,” Annilasia repeated. She waved her knife, hoping it would discourage him from coming closer.

He groaned. “Look, we’ve got maybe a minute before our guts are spilled.”

1. What inspired you to write this book?
The Jealousy of Jalice spawned from a need for queer rep in fantasy. As the story fleshed out though, I decided to center more on the character of Jalice rather than her gay brother (the original plan). It started with a line of thinking along the lines of, “What if I had a Disney-type story with two gay princes instead of the typical prince and princess tale?”, which then led to “And what if the villain was actually one of the princes’ sister?”, which led to “What if the sister puts a curse or something on one of those princes?”, which finally led to “Well, her story and exploring her motivations for such a decision are far more interesting for a debut.”

2. What, if anything, did you learn when writing the book?
I learned that I have a propensity to infuse horror elements into my writing. This was new to me, since I’d never envisioned my stories on the darker side, but as TJOJ evolved, I found the horror elements accentuated the dreary themes explored, such as betrayal of family and the consequences of selfish decisions.

3. What surprised you the most in writing it?
I was surprised that my original goal, which was to feature prominent gay characters, fell to the wayside as my interest focused on Jalice’s story and her arc. The gay characters do eventually come to the forefront in the sequel, but the idea of the ‘princess’ type character taking on a more sinister role rather than the (problematic) damsel in distress role really captured my attention.

4. If it’s not a spoiler, what does the title mean?
Jalice makes an incredibly selfish decision in her youth, and that decision is fueled by a strong sense of jealousy at the time. This decision ends up setting into motion events for everyone around her, and the story explores those consequences as well as her need to confront her decisions that led to this outcome. The title captures the original motivation behind current affairs in this book’s world, which can be traced back to Jalice’s jealousy.

5. Were any of the characters inspired by real people? If so, do they know?
No, not real people. Jalice was inspired by Sansa from Game of Thrones—a character that most people couldn’t stand for most of the series. But I found her compelling, and I really enjoyed her character arc, so I wanted to put a similar type character as the main focus for a fantasy series.

6. Do you consider the book to have a lesson or moral?
Sure, though it’s certainly not a requirement to gain that from reading it. Jealousy can be a nasty beast. It’s origins may have evolutionary basis, but it can be the root of all sorts of selfish mindsets and decisions. Additionally, I think the story underlines the brave necessity to face one’s mistakes, especially when those mistakes caused harm to others.

7. What is your favorite part of the book?
My favorite scene is probably Annilasia’s encounter down in the bunker. No spoilers, but readers will know what scene I mean. Her character trajectory takes a wild and insidious turn at that point, and it only gets worse for her after that.

8. Which character was most challenging to create? Why?
Probably the dokojin (Dardajah and Inzerious). They’re these demonic entities that technically have texture and bodies and motivations, but they’re not like human villains that can have redeeming or empathetic qualities. Readers won’t in any way root for them, which creates the danger of these entities being over the top or one-dimensional. I had to write them in a way that brought out their malevolence to such a degree that their horrific motivations and actions were simply too compelling to dismiss as predictable.

9. What are your immediate future plans?
I’m working on finishing up A Disaster of Dokojin. It’ll end up as a trilogy, and I’m writing the last one as of this interview. I’ve also written some initial drafts for a couple of novellas in a separate cosmic horror series that will release at the end of the year. What I’ve found during my writing journey is that horror seems to be my strong suit, so likely any fantasy series that I write will end up with a dark or dreary tone. For now, I’m leaning in hard to my fascination with the specific subgenre of cosmic horror, and I’ll see where that takes me.

Enthralled by the magic that written stories contain, Jesse Nolan Bailey has always wanted to be an author. With his debut fantasy series, A DISASTER OF DOKOJIN, released to the masses, he can now feel validated in his growing sense of imposter syndrome. He lives in Durham, North Carolina, where he has embraced the equally-gratifying lifework of hosting a trio of spoiled cats and two mini-aussies.

One Reply to “Spotlight, Excerpt & Author Interview: The Jealousy of Jalice + Giveaway”