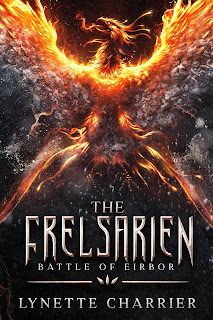 Cursed bloodlines; Two warring nations; Three mortals trying desperately to return to their home world
One hundred years of peace have shattered, and the gods have sent the most unlikely of Heroes, mortals.
On the planet Eyon, one hundred years of peace has ended after the kingdom of Elmoria invaded the neighboring kingdom of Tharon. Desperate to regain their lands and citizens, the Tharians beseech the gods to deliver Frelsarien to them-mythical prophets who, in the past, have used the power of the gods to bring peace to the land.
Meanwhile on Earth, Idun, Ayla, and Colton have no idea their bloodlines carry a curse that enslaves them to the Overseers – supernatural beings whose divine rule stretches across the universe, earning them the status of godhood. After the Overseers come to collect them, the three humans learn that they must bring peace between two warring nations, or be damned to a life on this planet with no hope of returning home.
When the three Frelsarien arrive, the Tharians are disappointed to discover that the gods sent nothing but ordinary humans. Some give up hope that they will be of any help, while others cling to faith. The Frelsarien must either find a new way to prove their worth to the overseers, or attempt to develop the powers they were promised. In the face of adversity, will they be able to rise up to the challenge?
In a gripping page-turner, author Lynette Charrier pieces together an epic tale against a backdrop of tyranny, strength and resilience. Battle of Eirbor is the first novel in the Frelsarien series, a masterpiece of epic crossworld fantasy.
Amazon      BN

Idun’s eyes flickered open. She had been dreaming again.

A throbbing pain pounded within her skull. She groaned and rubbed the back of her head and felt a large welt. Her bruised fingers glided around to the right side of her head, where she found another welt. She sighed while slowly propping herself up and looking around. Her eyes were still hazy, but she could just barely make out the silhouette of a woman sitting across from her. Idun rubbed her eyes before reopening them.

“I doubt that will help,” the woman said, just as Idun came to that very conclusion.
“You have a concussion.”

To her surprise, Idun recognized the voice.

The woman stood up and moved towards her, taking her seat on the bed next to Idun. There were two of her in Idun’s eyes, but she could still make out the features of her lifelong friend. She didn’t look like herself. Her long, curly, brown-black hair framed a smooth face, free of acne, and unhidden by glasses.
But the most striking difference was her weight. The last time Idun saw her, she was skin and bones and likely less than one hundred pounds. The Ayla sitting in front of her looked… healthy.

“Jesus!
How long have I been out?” She wondered if this was still part of the dream.

Idun chuckled and put her head back down on the pillow. “Seriously, though, how long have I been out?”

A confused expression crossed Idun’s face, and she looked up from her pillow.
“Can’t be. Don’t take this the wrong way, but there’s no way you look like this after just twenty-four hours. And my hair doesn’t grow this fast either,” she said, holding up a lock of auburn hair which was now longer than the length of her arm.

“These are our Frelsarien bodies…” She said as if that were obvious. She waited a moment as if to see if this triggered a memory, but it didn’t. Idun had no idea what that meant. “So, you really haven’t been briefed on this?”

“What?”
Idun picked her head off the pillow and looked up at the blur which was Ayla.
“What are you talking about?”

“Where do you think we are?” Ayla questioned.

Idun looked around the room, which, from what she could tell, was made completely of stone and decorated in red. “I don’t know…”

Ayla sighed. “What is the last thing you remember?”

“The last thing I know for sure wasn’t a dream.” Idun had to think for a moment. “I climbed that cliff just outside of town.” She rubbed the back of her head again. “I must have hit my head when I fell, though. I had this weird hallucination about being chased by the grim reaper.”

Ayla stood up to pour Idun a glass of water, then walked back and placed it in her hand. “Idun… that wasn’t a hallucination. It wasn’t the grim reaper, though,” She said, with a laugh.

Idun brought the cup to her lips but stopped, giving Ayla a confused yet doubtful glance. She opened her mouth to ask her to elaborate, but Ayla beat her to it.

“It’s called the soul splitter. It separated our souls from our bodies on Earth and brought them to our bodies here on Eyon.” She waited for a moment to study Idun’s expression again; Which happened to be one of disbelief. “Does any of that ring a bell?”

“Not even a little one.” Idun tipped back her cup and then placed it down on the table. “I’m actually pretty sure I’m still asleep.”

Ayla reached over and pinched the skin on the underside of Idun’s arm.

“What the heck!” Idun propped herself up with a jolt.

Idun scrunched her eyebrows together and massaged the back of her arm. “And you’re not Ayla…” 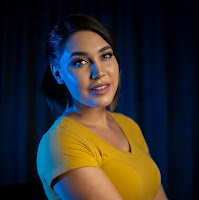 Lynette Charrier was born in Manitoba Canada but grew up in Southern California. There she met her husband who whisked her away back to his hometown of Naples Florida. Not long after she earned her degree in interior design and quickly found a job in the field. However her true passion lies with the writing community. Ever since she was little she had been making up stories of distant worlds and far off galaxies. Now she’s excited to finally share those stories with the world.
Website 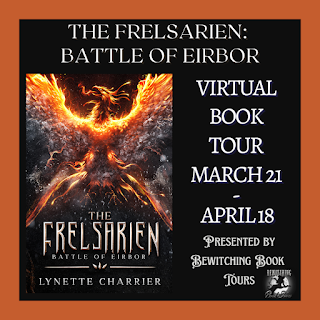 One Reply to “Spotlight & Excerpt – The Frelsarien: Battle of Eirbor + Giveaway”