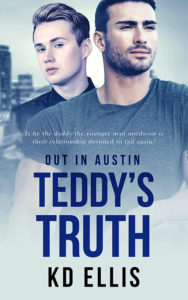 Book 1 in the Out in Austin series

Teddy De Luca thought being born into the wrong body was the worst thing that had ever happened to him. Then he met Julian…

All Teddy De Luca wants is for his outside to match his inside—so badly that he takes a loan from a Mexican cartel. It’s not like he can borrow the money from his alcoholic mother. She got him into this mess in the first place when she poured his savings into bottles of Jack. He figures he’ll get his operation, pick up a second job, then pay the debt off quickly and put it all behind him. When the cartel raises the stakes, his plan falls apart and he’s left with a mounting debt and no way out.

Ian Romero is a second generation Hispanic-American whose only goal is to live the American dream—finish college, find the perfect partner and settle down. His inappropriate crush on his brother’s best friend isn’t going to stop him. But when his troubled brother becomes another victim of the local cartel, his plans change. He can’t save his brother, but he can get his revenge.

After years apart, Teddy’s and Ian’s paths cross again, neither expecting the passion between them to re-ignite even hotter than before. Can Ian forgive Teddy’s role in his brother’s death to become the Daddy the younger man needs—or is their relationship destined to fail again?

Teddy tugged at the hem of his overlarge sweatshirt then discreetly scratched beneath the band of his sticky sports bra. As far as he was concerned, breasts were disgusting lumps of fat that hoarded sweat, bounced like painful beanbags on his chest when he was busy catching a football and strained the front of any button-down he tried to wear. He couldn’t understand why boys were so obsessed with them. He personally couldn’t wait to get the damn things cut off.

Hormone therapy had deepened his voice and given him a shadow of patchy fuzz on his jaw. Clippers had sheared him of his blond hair and his mother’s Italian heritage had blessed him with broad shoulders and narrow hips.

It was unfortunate that it had also cursed him with breasts that not even puberty blockers had been able to thwart.

He wished he could blame her awful time-management skills on their heritage as well, but he knew better. The fault lay with either Jack or John—the bottle or the boyfriend, whichever she was currently in bed with.

He’d been sitting on the hard, concrete steps of the high school for almost an hour. It wasn’t like he could call her. His cell was out of minutes, and hers was probably dead on the nightstand.

Just as the final school bus trundled back onto the parking lot and Teddy was about to give up on waiting, someone stepped up beside him, casting him in shadow.

“Stay there,” Teddy ordered, craning his head back until he could grin at his best friend. “Perfect. Be my sun block.”

Shiloh, still in his leotard, laughed and nudged Teddy’s hip with his shoe. “If you don’t think I shine brighter than the sun, then clearly I’m not wearing enough glitter.”

“Shine as bright as you want, but just keep standing there. Fuck, it’s hot!” Teddy gripped his collar and tugged at it repeatedly, trying to stir a breeze. All it ended up doing was wafting the stench of boob sweat up into his face.

“Well, duh, it’s ninety degrees—and you’re in a sweater.” Shiloh rolled his eyes and dropped onto the curb beside him. “And it’s not even pink.”

Teddy opened his mouth, his usual response dancing on his tongue—that boys don’t wear pink—but he swallowed it. Shiloh was currently in a hot pink leotard and pink Chucks.

Instead, Teddy shrugged and glared down at his baggy jeans and boring blue sweater. “You know why.” It was hard enough getting people to call him Teddy instead of Thea. Or, worse, Theodora.

“With your handwriting, they’d probably think you wrote ‘Daddy’.” Teddy dropped back to use Shiloh’s arm as a pillow.

Shiloh shifted but didn’t pull away. He just rolled onto his side, his blond hair flopping into his eyes. He left his arm beneath Teddy’s head, bringing their faces close enough that their noses nearly touched. “It’s not that bad. Besides, you’re clearly not a Daddy.”

Teddy rolled his eyes. Ever since he’d borrowed Shiloh’s laptop to finish up his college application essays—and forgotten to clear his search history after falling down the rabbit hole of kinky porn—Shiloh’s teasing had been less than subtle. Teddy refused to be embarrassed, though, especially since the only reason he’d stumbled onto that website in the first place was because Shiloh had left three separate bookmarks for it.

It reinforced everything Teddy knew about their relationship. They were destined to be the bestest of friends—but nothing more. They were both too attracted to the same type of man—tall, dark and dangerous.

Still, knowing his friend was into the same kinks that he was didn’t mean they needed to talk about it. He ignored the leading comment and switched back to the far safer topic of handwriting. “Remember when Mr. Carmine thought you wrote an essay on Storage Wars?”

“I did write him an essay about Quasimodo. Well, really about how the novel by Victor Hugo helped raise the money needed to restore the cathedral, and—” Teddy felt the beginnings of a spiel on gothic architecture creeping up.

“Teddy, can I touch your buttress?”

“Your hand can stay far away from my buttress, fuck you very much.”

“It’s like a butt fortress. I just want to invade your buttress! Why are you so mean to me?” Shiloh rolled onto his back and kicked his feet against the sidewalk like an angry toddler, except for the smile on his face.

“No, it’s impregnable!” Teddy stuck out his tongue.

“Something tells me you don’t know what that word means.”

Immediately, Shiloh rattled off the definition. “Impregnable. Unable to be captured or broken into. Also, unable to be defeated or destroyed. But you have to admit that it sounds an awful lot like it means you can’t make babies.”

“And thank God for that,” Teddy shivered at the thought of being responsible for a little, squalling, helpless baby. “I might miss wearing pink, but I won’t miss that.”

Teddy froze at the accidental admission. His therapist had told him that it was normal, that gender was a spectrum and that just because he still liked feminine things didn’t make his desire to transition less valid. Still, it was the first time he’d admitted it to anyone except his therapist.

“The poor football players won’t know what to do with themselves. Think of all the spontaneous erections.” The few he’d dated had been far more interested in his ass than a straight guy probably should be—not that he’d obliged, since he refused to be anyone’s dirty little secret.

Shiloh sighed. “It would be a beautiful gift to all of us.”

A black Mercedes pulled up to the curb, barely parking before the driver was leaning on the horn.

“Impatient bastard,” Shiloh grumbled. “I don’t know why he’s in a hurry. He gets paid by the hour.”

“Well, that stick is so far up his ass it has to be uncomfortable sitting down.” Teddy sat up and straightened his sweatshirt. The Becketts’ driver was a homophobic dick. He didn’t understand how the man hadn’t been fired yet.

Shiloh pushed himself to his feet. “I bet he has hemorrhoids. That’s probably where he rushes off to every night.”

“Ew. You picture him rubbing cream on his ass?” Teddy teased.

Shiloh gagged, shoving Teddy to the side. “Gross. You’re such a dick. I don’t know why I hang out with you.”

“Because you love me.”

The Mercedes blared its horn again, a demanding series of honks that only ended when Shiloh threw a hand up in acknowledgment. “I gotta go. Do you have a ride?”

Teddy shrugged. “Yeah. She must just be running late or something. I’m sure she’ll be here soon.” He knew she wouldn’t be, but he’d rather walk than listen to the driver sling slurs. He didn’t understand how Shiloh dealt with it.

Shiloh hesitated on the bottom step, looking like he wanted to say something, but all he did was give a small nod and say, “Okay. See you Monday?” 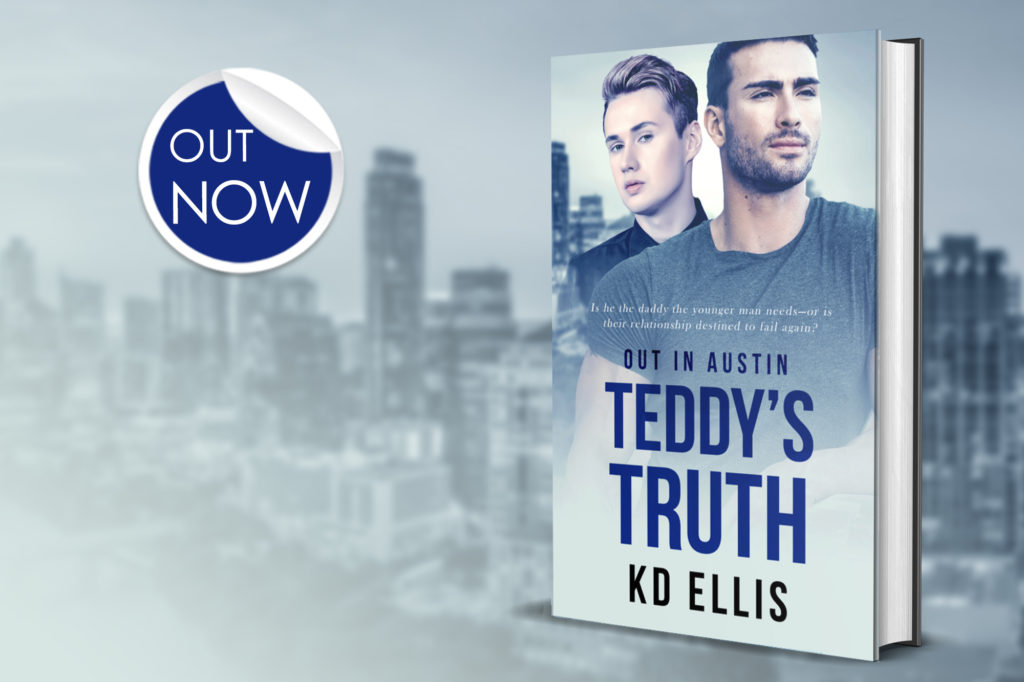 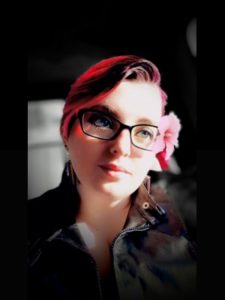 KD Ellis is a professional cat wrangler by day, and an author by night. She moved from a small town to an even smaller village to live with her husband and wife and their two children. She loves reading—anything with men loving men. She writes queer romance in between working her two jobs and cuddling her pets—all six of them, which confuses the turtle.

Enter to win a fabulous Goody Bag and a $5.00 First For Romance Gift Code!

KD ELLIS IS GIVING AWAY THIS FABULOUS PRIZE TO ONE LUCKY WINNER. ENTER HERE FOR YOUR CHANCE TO WIN THIS FABULOUS GOODY BAG AND A $5.00 FIRST FOR ROMANCE GIFT CODE! Notice: This competition ends on 20th January 2021 at 5pm GMT. Competition hosted by Totally Entwined Group.