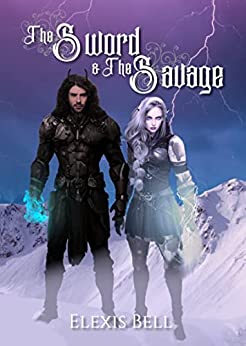 Enemies turn to allies turn to lovers as they unite against a man bent on purifying the world of savages, but what are they willing to sacrifice to save the ones they love?

When Lessiyara saves Ronan from a crumbling cliff, she reluctantly welcomes him into her camp. But having struggled to hide her secrets even among the emotionless Vaikahlen people, she fares no chance of hiding from a Soorahk man who understands the expressions on her face.

Having trekked up the mountain to kill Lessiyara’s leader, Ronan eyes her warily. But his family and friends must be avenged, and the future of his tribe is at stake if he can’t rejoin his Sword Siblings and take the Vaikahlen leader down.

When he learns the truth of her parentage and the bruises on her back, he realizes they may have a common goal. But just as a connection sparks between them, the coming battle threatens to tear them apart. Can they save the innocent lives in the valley from a man bent on ‘purification?’ Or will they pay for revenge with their blood?

The joy of found family weighs against the need for justice in this story of survival and self-expression, plumbing the depths of the human (or… not quite human) heart as enemies turn to lovers.

1. What inspired you to write this book, or how did the idea start?
Sometimes, if I can’t sleep, I imagine a character, any random character. I just make them up on the spot. Then, I just kinda… see what they do. It helps center my mind and get it to stop racing from one topic to another so I can actually get to sleep. If I like the character or the scene that I came up with enough, I come back to it the next night. Then, when I have enough, I write it.

2. What, if anything, did you learn when writing the book?
Mostly things about myself. I researched various healing plants and things like that, but it was more of a refresher on research for previous books. So the things I learned were mostly revelations about my own hesitation to be open with people in my own life.

3. What surprised you the most in writing it?
The moment when I realized the magic in the book was alive, sentient and fully self aware, not just energy. I don’t plan my books, so things like that can just develop, gradually or spontaneously, and that was probably the biggest surprise.

4. If it’s not a spoiler, what does the title mean?
It’s kind-of a play on words, but not really. Both parts of the title can refer to either MC, depending on perspective. Ronan is a Child of the Sword (his tribe’s name for warrior), and Lessiyara is seen as a savage by her people because of her emotions and the fact that she doesn’t have perfect control over them like they do.

But her people also consider Ronan, and his entire race, savages because they embrace not only their emotions, but the fact that the magic is a living entity with a will and rights of its own. And since Lessiyara doesn’t know about that (the reason for that is a spoiler), and she can’t control her emotions to control her magic, she uses a sword to protect herself instead of forcing the magic to do her bidding.

5. Were any of the characters inspired by real people? If so, do they know?
Nope. I don’t typically base characters off real people. I’ve drawn loose inspiration for aesthetic for a couple characters, but they weren’t in this book.

6. Do you consider the book to have a lesson or moral?
It’s main focus is on the importance of self-expression and letting people in, but it also looks at what is (and is not) worth sacrificing for.

7. What is your favorite part of the book?
It’s kind of a spoiler because it happens toward the end. Lol. So, I can’t really say.

My second favorite part is, and this is going to sound terrible, when Lessiyara is revealing some of what’s happened in her past to her newfound family, and she says it was better to have been beaten with the cane than the whip as the cane was more likely to break and absorb some of the force. Their shock as she said it, and her complete and total sincerity in her preference for one weapon over another, really highlighted how accustomed she was to the abuse, how normal it was to her. Not good, but normal in her life.

It really highlighted how much abuse a person can internalize, even though they shouldn’t have to, and that’s not something that’s shown often in books.

8. Which character was most challenging to create? Why?
They all just happened, honestly. There weren’t any that were a struggle. The characters are my favorite part of writing, partly because they take over and lead the way.

9. What are your immediate future plans?
As far as writing is concerned, I’m hoping to finish this round of edits on my literary sci-fi/fantasy series, The Regonia Chronicles, soon, and I’m steadily forging ahead in the first draft of book three of my literary zombie apocalypse series, Blood is Thicker. I’m hoping to dive back into the first draft of my literary paranormal fantasy romance, A Song of Sorrow & Sirens, soon after the release of The Sword and The Savage.

Outside of writing, playing with my kitties, playing Dying Light, working in a factory, and hopefully building a greenhouse to make starting seeds easier in the spring. Elexis Bell writes gritty and emotional novels. Born and raised in the midwestern United States, she dreams of a cabin in the woods rather than a house surrounded by cornfields.She loves writing well-developed characters facing real problems in vibrant, magical worlds. Armed with a degree in psychology and a rollercoaster past, she sprinkles gut-wrenching emotions over high fantasy romance, science fiction, and the occasional thriller.