Tropes: shifters, mpreg setting but there isn’t pregnancy or childbirth in the books,

Themes: Standing up for yourself and others, not letting opportunities pass you by,

Book 3 could be read as a standalone,

but has spoilers for the other two so is definitely better read as part of the series. 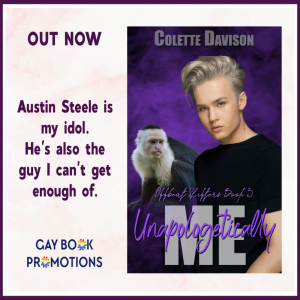 Austin Steele is my idol. He’s also the guy I can’t get enough of.

Austin Steele is my idol. He’s also the guy I can’t get enough of.

Everyone thinks they know who I am—one of pop’s biggest divos. They don’t know me at all. Austin Steele makes me want to see the real me, only there’s some problems:

We’re both omegas, he’s nineteen years my senior, he’s nursing old wounds, and he wants to keep what’s happening between us a secret.

I thought a one-night stand was all I wanted. Now it’s becoming so much more. But how can we look to the future when we can’t let go of our pasts?

Unapologetically Me is the third book in Offbeat Shifters, an m/m paranormal romance series with a continuing storyline. This book includes a misunderstood and unapologetic Arctic fox shifter, a caring capuchin monkey shifter, and a HFN ending. While it’s set in an alternate universe where omegas give birth, there are no pregnancy or birth scenes in this book.

“I can’t remember the last time I just hung out with someone before this week.” I laid my head on his shoulder. “That’s not true. It was right before my first album went viral.”

“I guess you know how that feels, huh?”

“The cupcakes will be cool enough to decorate.” I cleared my throat and stood.

We’d been having fun, and I didn’t want to drag the day down with drama about how lonely I was. Had been. Could I consign my loneliness to past tense now that I was spending time with Austin?

“I’ll help you make some icing if you want.”

I showed him the recipe I liked to use, loaded up a piping bag for him, and hand over hand showed him how to use it.

I carefully cut a hole out of the centre of each of my cupcakes, into which I pushed a fresh strawberry. Then I popped the top back on and began to ice them. I’d coloured my icing a soft shade of pink, much paler than the bright red of the strawberries. Using a controlled motion, I spiralled the icing onto the top of each cupcake.

I looked around to see that his hands were covered in icing, and the nozzle had shot off the piping bag onto one of his cupcakes. Icing dripped everywhere.

I couldn’t help but laugh. “You squeezed too hard, didn’t you?”

“It wasn’t coming out,” he grumbled.

He put the piping bag into a bowl, washed his hands, and grabbed a spoon. I watched for a moment as he dolloped icing onto the top of each cupcake. They looked anything but pretty. Still chuckling to myself, I finished mine off by sprinkling the tiny pieces of chopped strawberry over the icing.

“Get a couple of plates out.”

He complied. I cut one of his cupcakes in half and put a piece on each plate, then did the same with one of my own.

“We could use our fingers?”

“I’m pretty sure that’s not how they do it on cooking shows.”

Austin smiled and grabbed a couple of forks. “We should taste the same one.” He handed me a fork. “Mine first.”

“So we’re saving the best until last? We’ll need to eat yours to get rid of the taste of mine.”

He raised his eyebrows. We both took a bite.

“Oh.” The cupcake was like a dry rock in my mouth.

“See what I mean?” Austin said around his own mouthful.

I grabbed some water to wash it down. “They’re not bad for a beginner. A little dry.”

“You might want to try adding a bit of milk when you’re mixing the ingredients. It helps to make the mixture light and fluffy.”

“What would help the taste?”

“Some vanilla-bean paste. It’s much better than vanilla extract,” I added, glancing at the small brown bottle of extract that Austin had bought but obviously not used in his own cakes.

Austin nodded thoughtfully before trying my cake. He closed his eyes and murmured his approval. “Now this is like an orgasm in my mouth.”

“An orgasm in my mouth.” He devoured the rest of his half of the cupcake and then put his plate down. “You win.” He wrapped his arms around my waist.

“A kiss.” His lips and tongue tasted of strawberries and icing.

Check out the first two books in the Offbeat Shifters Series

Colette’s personal love story began at university, where she met her future husband. An evening of flirting, in the shadow of Lancaster castle, eventually led to a fairytale wedding. She’s enjoying her own ‘happy ever after’ in the north of England with her husband, two beautiful children and her writing.