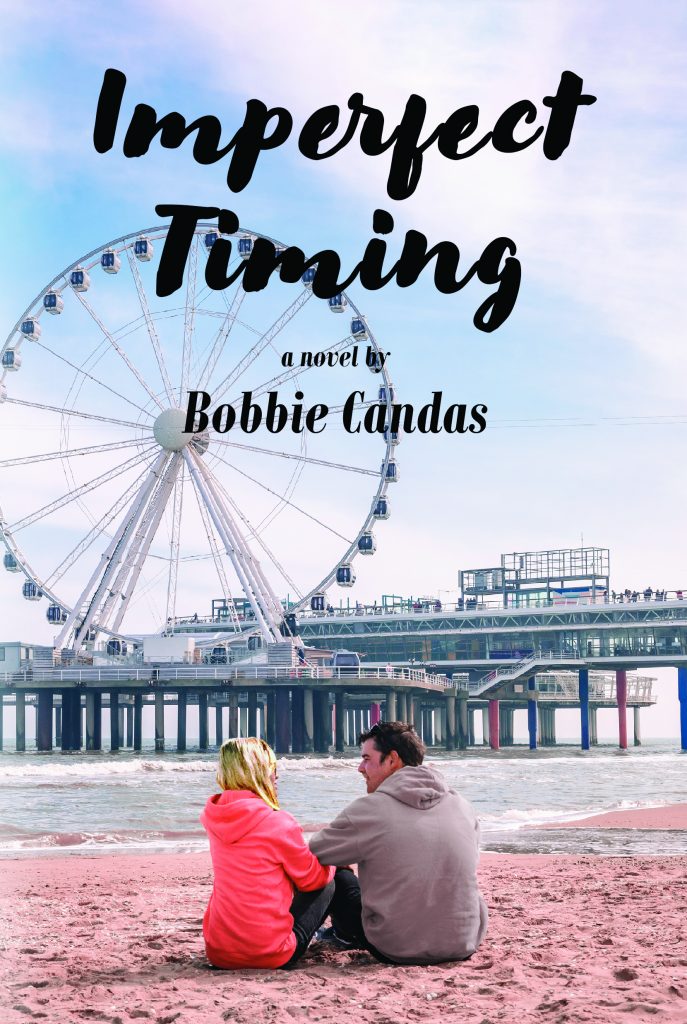 Time is ticking on this second chance at romance…

With a recent promotion and loads of confidence, Chloe Stevens has landed in sunny LA as a sales director for a leasing company. Quickly picking up on successful business strategies, Chloe also zeros in on a challenging romance option, Zane Shepard, an LA city planner. Chloe and Zane quickly discover an intriguing lust/love attraction, eventually transforming it into the perfect relationship.

After a year, Chloe is ready to take the next step, cohabitation, but instead, Zane blindsides her with the unexpected news of a breakup.

After months of sleepless nights doubting herself, Chloe decides their breakup stemmed from the issue of bad timing; she was ready to commit and he wasn’t. Armed with her theory of choosing future relationships based on matching timelines, Chloe packs up her damaged heart and moves home to Dallas. She quickly lassos a new love interest, Trey Morgan; a boyfriend with good timing who’s ready to take the plunge.

Twenty years later, Chloe’s world unravels when she discovers her marriage to Trey is riddled with infidelity and lies. Taking on a new job, she’s forced to confront her past and rebuild the confidence she had in spades when she was younger. Unexpectedly, she has a chance to take a second stab at romance, but finds her good timing mantra severely tested.

“Coupling up, making that long-term commitment. Everyone says it’s all about that one-in-a-million someone, fate and a chance meeting, that special sparkle in the eyes. Bullshit. I say it’s all about timing. A couple can be absolutely smitten, madly in love, devoted initially, but if the timing’s not right, forget about it.”

I was explaining my theory to Mimi, a bored co-worker, and she wasn’t buying it. Perhaps I was sounding a little too passionate. After all, it was only lunch, with no liquor involved. I’d taken her out for sushi and as Mimi looked around at the lunch crowd, she sipped her water and decided to engage.

“OK, Chloe, so you’re saying all these co-habitating couples right here, are not or weren’t necessarily in love when they committed. It was only a matter of good timing for all of them; chemistry had nothing to do with it? People are only settling because they’re in the right spot at the right time.”

“Bingo; exactly. I’m not saying one hundred percent have settled. A few got lucky right off the bat with the right-place, right-time thing, but yeah, a whole heck of a lot of people are married to a person because someone wandered by, caught their eye, and lassoed them in when they were ready to say yes.”

Three months of sleepless nights, tangled in sheets, with my mind running in circles ruminating on what had gone wrong, had led me to the conclusion of lousy timing.

I’m a Texas girl: grew up in San Antonio, went to school at UT in Austin, and settled in Dallas where I raised a husband, two kids and a few cats. My husband and cats will probably disagree on who raised who, but I’m a sucker for a robust discussion.

For years I’ve been involved in retail management, but have also really enjoyed writing, taking deep dives into the lives of my characters. When you can pry my fingers off the keyboard, I’ve been known to imbibe in a few glasses of wine and have been spotted forking into some decadent desserts while gathering with friends and family. I enjoy shopping, usually on the hunt for apparel with a weakness for shoes, and will frequently jump at the opportunity taking an unexpected trip to a far-away place.

In addition, there’s always time for reading. I keep a stack of novels ready and waiting on my night stand, with a few tapping their toe in my Kindle as well. I bounce around genres, snoop around the best-seller lists, and on the ready for a good recommendation.

The author will award a $30 Amazon/BN gift card as well as a print copy of the book to a randomly drawn winner (book available for continental US only). 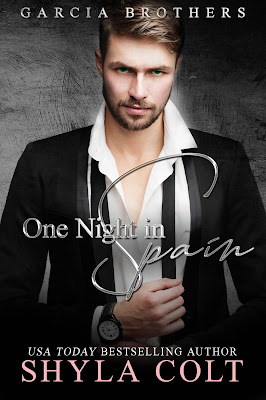 The minute he laid eyes on Deandra at his brother’s engagement party, Diego Garcia was smitten. The older woman with voluptuous curves, and an enchanting laugh, drew him in like bees to honey. The week-long destination wedding in Spain was his chance to win her over and show her that age truly is nothing more than a number. The Garcia family was known for their curse. Once they meet the one, no other woman exists. Now, he has to prove to Deandra what he feels is more than lust.

History professor Deandra Little found the young lawyer’s interest flattering, but she didn’t see how their life would meld. That didn’t mean she saw anything wrong with a little bump and grind in paradise, so she let the charmer take her to bed. More than passion was made on their trip, and now a baby will make three in eight months. Torn between wanting to believe the fantasy Diego is selling and her need to build a firm foundation for their child, Deandra has plenty to consider.

Will they be co-parents or more by the time their bouncing bundle arrives? 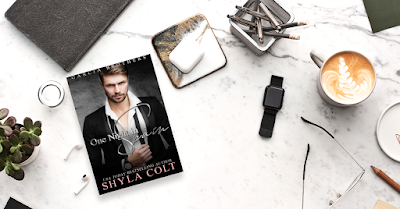 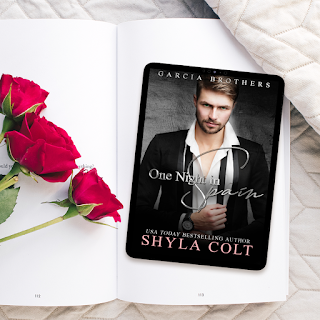 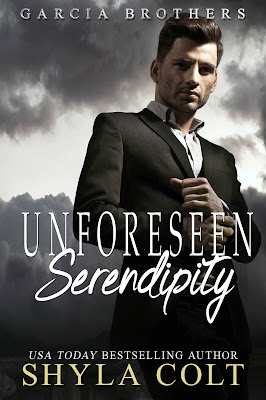 The past refused to let their love die.

The last thing Loretta “Lo” Inam expected to find on her new dating service was the one man who shattered her heart. Dating without seeing each other or knowing the other’s name seemed perfect. She spent seven months falling for the charming man with a deep voice and a strong personality. Connecting over their love of 80’s movies, the outdoors, and more, she’s ready to call him the one. Imagine her shock when she sees her lost love, Tomas Garcia.

Attorney to a prestigious family law firm, Tomas Garcia is tired of hooking up with women who only want him for what he can give them. The new dating site was perfect for his needs. Meeting his mystery woman and falling in love over late-night conversations, online dates with the camera turned off, and secret sharing, he was ready to commit. A first meeting at the bar reveals her to be the one woman he always regretted letting go of.

Did fate bring them back together, or was it an unfortunate case of coincidence? 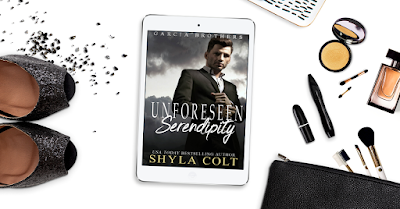 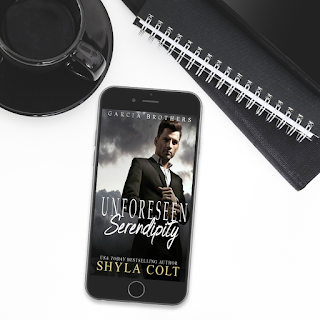 O’Malley’s is bustling as I step inside. People are packed into the tables, booths against the wall, and the bar. My eyes scan the room eagerly. I feel like I’ve been waiting my entire life for this one moment. Chest tightening, I step further inside, clutching the single rose between my fingers. A red bloom rests on the counter at the end of the bar furthest for me. I take in the off-the shoulder mustard yellow dress that contrasts with smooth brown skin. A hint of cleavage teases me with the merest glimpse of plump breasts in the v cut of the dress. I follow the slender neck up and meet the stunned, wide-eyed gaze of the one woman in my past who held a candle to L.

She rises abruptly. The legs of the stool scrap the floor.

“You.” Her shoulder-length curls bounce around her face as she shakes her head.

“You. You’re, L?” It makes an insane kind of sense. I didn’t mistake her as being the one. It’s been here all along. The odds of things lining up to put us both here in front of each other is mind-blowing. The one-woman etched into my very soul is in front of me a vision in yellow and indignation. Her eyes flash with anger. The familiar spunk makes me smile.

“I’m gone.” She sidesteps me, and my chest clenches. Everything in me screams no.

I grab her arm. “Don’t leave Lo. I’ve been praying for this moment for years.”

She peers at me over her shoulder. The pain in her gaze guts me. “You expect me to believe that.”

“Yes, because it’s the truth. I’ve always regretted the way I handled things—.”

Turning to face me, she shakes her head. “We’ve already tried this once, Tomas.”

She exhales. “Give us a chance. Let me prove I’m not that self-centered prick with a chip on his shoulder. I can’t go back to days without hearing from my L.”

“Tomas. Sorry is nothing more than a five-letter word—.”

“That’s why I asked for the chance to prove it.”

Her lids lower, and I know I’ve won. “How would we even do this?”

I stand up straighter. “Hello Lo, it’s nice to finally put a face with the name.”

“No.” I shake my head. “I know it’s going to be a rocky road, but you are worth it. You have to know you’ve become my everything, Dulzura.”

“I’m the same man you’ve spoken to nearly every day for the past six months. We have an unpleasant event in our past. But that’s not all we have.” I step closer. “I’m so sorry I hurt you, Lo.