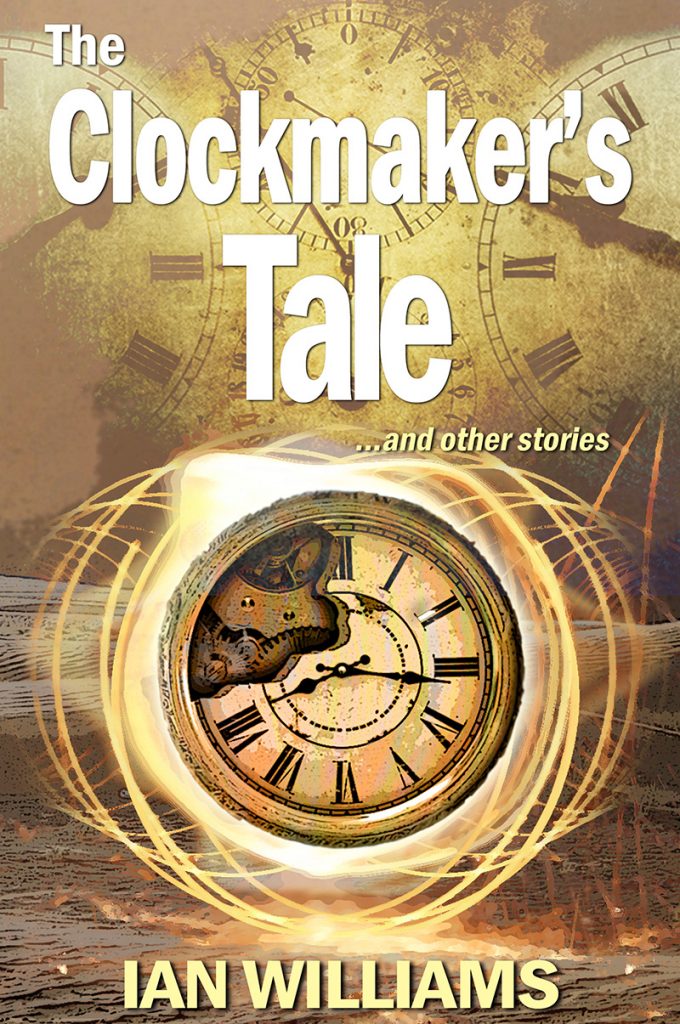 In The Clockmaker’s Tale: and other stories, Ian Williams takes us to the near future and beyond. From a moon base where androids conduct experiments on human test subjects, to futuristic tours of the ocean depths that hide a terrible secret; from a society governed by harsh rule of law that is enforced by AI, to a humble clockmaker tempted by the promise of increased productivity through technological augmentation.  Covering issues such as environmental decay, the end of facts and proven truths, our growing waste problem, and humanity’s tendency to divide when we should come together, this collection of six science fiction stories relates as much to our time as it does to the many possible futures.

Returning to his briefcase, Alexander produced a card from an outside pocket. “Here,” he said, holding it between two of his fingers.

George took it and looked it over, now realising there was a sales pitch to follow. He’s better at this than I am, he had to admit. At the top of the textured card was the name of a company he was certain he knew but couldn’t quite place. “ACC?”

“Adaptive Cognition and Cybernetics. We specialise in cutting-edge, next-generation, technology. Our latest product was made for people just like you, who need more hours in a day than the good Lord provides.”

I left my work for this? George was less than impressed. “Thank you, but I…”

“Before you say no, how about I show you what I’m talking about?” Alexander picked up his briefcase and walked to the counter, where he placed it down and clicked open the catches. He kept his back turned until he was ready to present his product.

When he turned, George was immediately drawn forward, to inspect the object himself. He was fascinated by the curved design. It had a snowy-white casing, with delicately printed calligraphy underlined by a sweeping blue line, and a tiny, built-in, LED screen. It appeared as well-made as any of his clocks. Such a high degree of engineering, yet it remained a simple-looking thing.

“This,” Alexander said, not quite ready to hand over the device, “is our latest model. It’s called a Work Buddy.”

As with many of my stories, it first started as an image in my head. I saw an old man working in his workshop, while behind him, through the window, I saw the future. From that blossomed the collection of stories that comprise The Clockmaker’s Tale: and other stories. But the initial spark came from the juxtaposition of the old clashing with the new. Can a humble clockmaker fit into our idea of the future? What about if he had help, say from some piece of tech? The idea was to make a point, something that each story is aiming to do.

In researching this book, I came to understand certain issues we face better than I had before. As these stories are concerned with our future, and how, if not handled correctly, our problems could overwhelm us, I wanted to know all I could about them. And the statistics are quite damning.

What surprised me most in writing this book was just how angry some of these subject matters I’ve written about had made me before I began. I would often complain about the state of things to family and friends until I felt the need to put my feelings to paper. So, I consider this book my therapy of sorts. It certainly made me feel better to write it.

The title ‘The Clockmaker’s Tale’ is used to signify that this story was the one that I began with. Writing this story ignited my interest in putting my fears into story form, and from this story grew a project I am now immensely proud of.

I don’t tend to base my characters on real people. However, I will always take elements of others’ personalities that have intrigued me and add them to my characters. I find this makes my characters a little more real.

A moral, yes. Each tale tells of a future where we’ve ignored warning signs and allowed our worst traits to run riot. The message may be buried deep but it is always there. With a little teasing out, it becomes clear.

My favourite part of this book is probably the end of Post-Truth Tours. I found this one of the most satisfying endings to write. I won’t give anything away here, but this scene in question makes its point with the most emotive power. I wanted readers to be surprised by it, perhaps even a little shocked too.

Again, Post-Truth Tours has the answer here. The main character, Flynn, posed a particular challenge to write. Namely, his views on the world he lives in. Some would call him naïve; others may say ignorant. He sees the world through eyes clouded by others’ lies.

I am currently deep in the planning stages of my next project. It will be a short story collection exploring the altered timeline of a fictional British town rocked by a mysterious event. I plan to have a completed first draft completed by the end of the year.

Ian Williams is a Science Fiction writer from the UK. He lives in a small town not far from London. Ian had a short career in the UK Court Service but was forced to quit that job when his medical condition worsened. Now, from the comfort of his wheelchair, he writes the stories he has always wanted to read. His writing spans lightyears of space, to near-future Earths; from small changes to society, to entirely new civilisations.

Giveaway:
Ian Williams will be awarding a $50 Amazon or Barnes and Noble GC to a randomly drawn winner via rafflecopter during the tour. 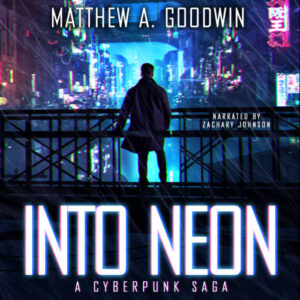 Moss’ life is going nowhere until a mysterious woman knocks on his door and leaves him with the key to take down one of the world’s largest corporations. When he discovers a familial connection to the stranger, Moss leaves the comfort of his home with his best friend for the sprawling megacity.

There, he joins a group of ruffians dedicated to freeing people from the yoke of the evil companies. Police-for-hire, motorcycle gangs and betrayal threaten them at every turn.

Can Moss help this small group of rebels fight the power before it’s too late? Find out in Into Neon: A Cyberpunk Saga. 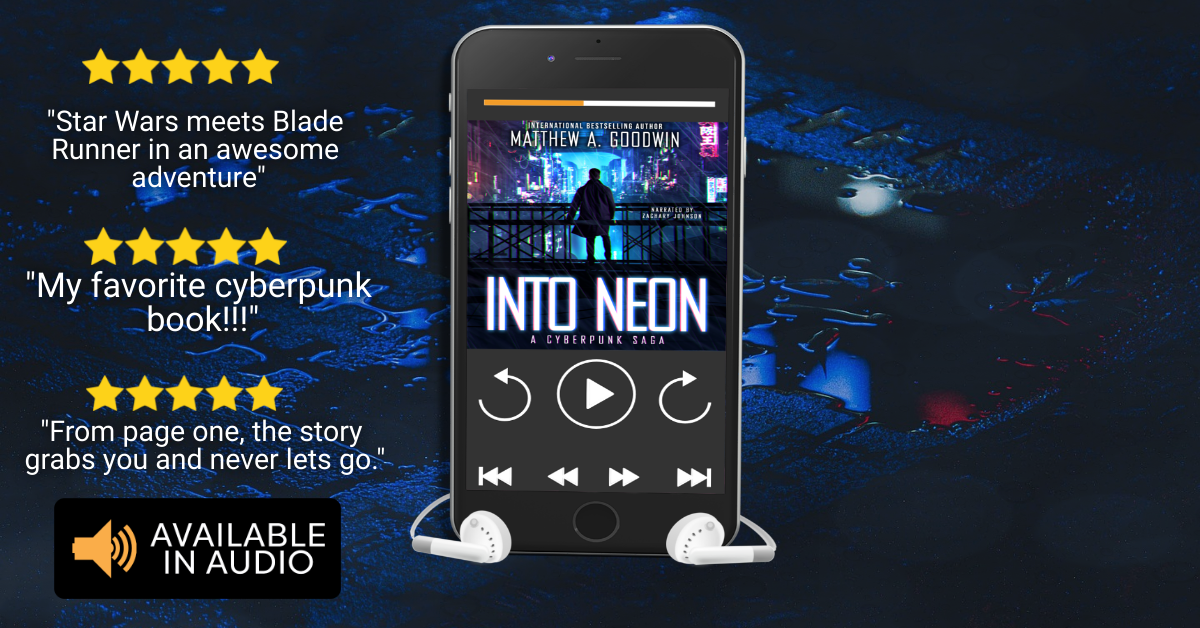 Q&A with Author Matthew A. Goodwin 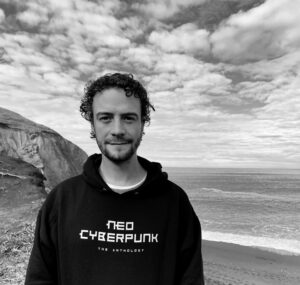 Matthew A. Goodwin has been writing about spaceships, dragons and adventures since he was twelve years old. His passion for fantasy began when he discovered a box set of the Hobbit radio drama on cassette tape in his school’s library at the age of seven. He fell in love with fantasy worlds and soon discovered D&D and Warhammer miniatures.

Not wanting to be limited by worlds designed by others, he created Thutopia (now called the Thuton Empire), a fantasy world of his own which he still writes about to this day.

Like many kids with an affinity for fantasy, a love of science fiction soon followed. He loved sweeping space operas and gritty cyberpunk stories which asked questions about man’s relationship to technology. That led him to write his first published work, Into Neon: A Cyberpunk Saga, which takes place in a larger science fiction universe.

He has a passion for travel and wildlife and when he is not off trying to see the world, he lives in San Francisco with his wife and son. 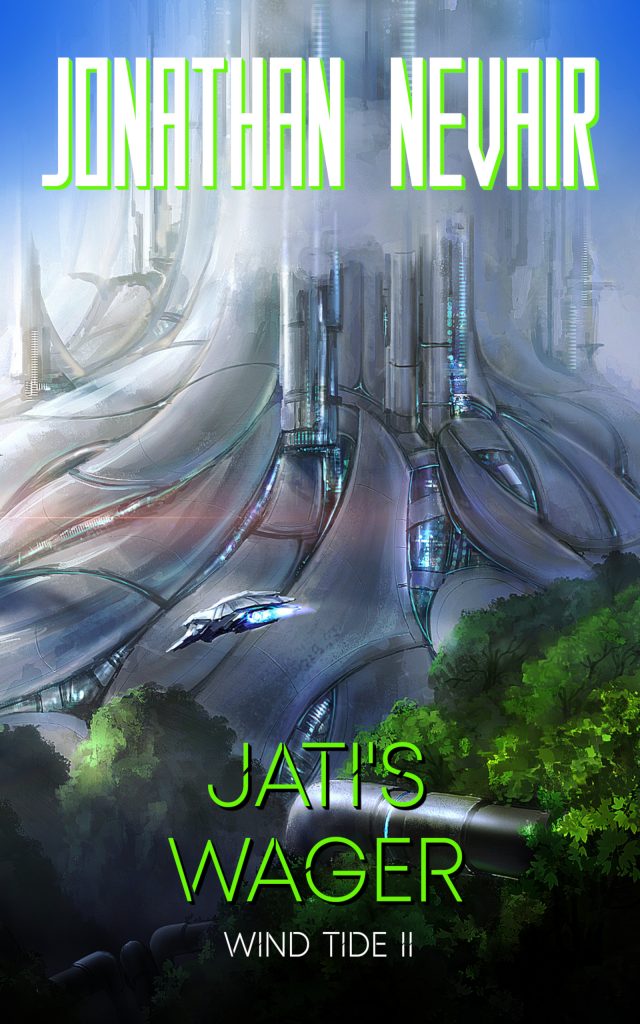 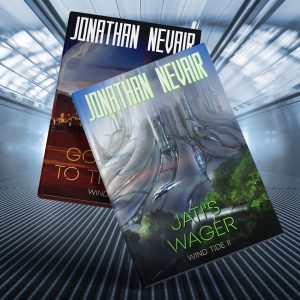 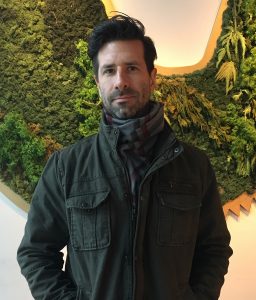 Q&A with @iwilliams235 author of the #SciFi #shortstory #collection THE CLOCKMAKER'S TALE AND OTHER STORIES. Discover his favorite part of the book. Enter to #win a $50 Amazon/BN GC! @SadiesSpotlight http://sadiesspotlight.com/the-clockmakers-tale-giveaway/