Book Title: The Case of the Boy in Blue 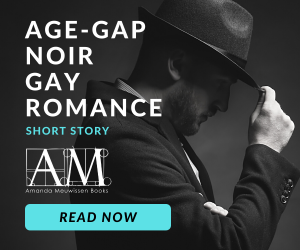 This kid was going to be trouble, I just knew it.

Leonard Quill, private investigator, never expected a case to walk through his door quite like this one, complete with murder, a frame job, blackmail, and powerful players, especially coming from a man with bright blue eyes behind his glasses, a crooked bow tie, and an impossible smile. 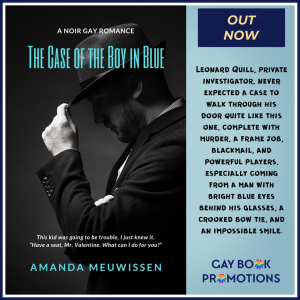 Mr. Valentine—call me Westley—looks the part of bumbling fool, who’s too naïve to know he’s walked into the lion’s den even being near this neighborhood without packing some heat but turns out he has a few secrets even darker than mine. His old man is in the clink, doing time for killing his mother. Only Westley swears the real culprit is someone else and his father has been framed.

Maybe that’s true, wouldn’t put much past this city, but if Westley is right about who’s behind the frame job, this isn’t a case I can take lightly.

“Sorry, kid, but you think James Deckard is behind all this? He’s not the type of man you bring down legally.”

“I know that. That’s why I came to you. The cops laughed me out of the precinct.”

“I ain’t a hitman either,” I snarl, wondering if sweet and innocent was an act and this kid has it in him to get all murdery and scuffed up, so long as someone else does the killing.

But those blue eyes go wide, and I know that if there is a darker side to him, it’s buried much deeper than trying to pull one over on me. “I don’t want a hitman, Mr. Quill. But I need someone willing to go the extra mile the cops turn their noses at. Someone who’ll take the risk to get real evidence and finally put this monster away. Even the worst of the worst for all the crooked cops in this town can’t cover up Deckard’s deeds if we have proof.”

Westley isn’t wholly off base though, with the right judge, the right amount of ammunition, but it would be life or death with my hide on the line to get it done. Usually, that’s par for the course, half the fun of the job is getting a little lost in the muck, but Deckard is the type to make you disappear real quiet like—to the outside world. You wouldn’t be gone right away; you’d stay breathing for weeks, screaming where no one could hear you.

“You tell my secretary all this?” I ask, already knowing the answer given Roxanne’s response to the kid.

“Of course. She was sure you’d agreed. Please, Mr. Quill, won’t you help me?”

Damn this kid, and damn Roxanne too. She knows the stakes involved, but she has it out for Deckard’s business partner, Jeffrey Yacobian, who she’s suspected for a long while had a hand in her sister’s murder. This opens another avenue to investigate the scum of our city with me as the point man.

Roxanne also knows I can’t say no. I promised her we’d catch Yacobian someday. Bringing down Deckard could pave the way for that and ease the potent grief of this kid in front of me who might be the last sunny disposition left in these dank streets.

“The risks involved ain’t gonna come cheap. How much is all this worth to you?”

Westley looks me square in the eyes, that blushing virgin routine set aside as he sits up taller—maybe all that light was a clever mask after all. “Everything I have, Mr. Quill.”

“Leonard. You’re either turning over your life savings when this is over or paying for my funeral if it flops, so call me Leonard.” Might as well be on a first name basis considering we’re both gonna end up on ice. “Now let’s start at the beginning, and you tell me everything you know.”

Amanda Meuwissen is a bisexual author, with a primary focus on M/M romance. As author of the paranormal romance trilogy The Incubus Saga and several other titles with various publishers, Amanda regularly attends local comic conventions for fun and to meet with fans, where she will often be seen in costume as one of her favorite fictional characters. She lives in Minneapolis, Minnesota, with her husband, John, and their cat, Helga.

Enter the Rafflecopter Giveaway for a chance to win a choice of ebook from the author’s backlist.