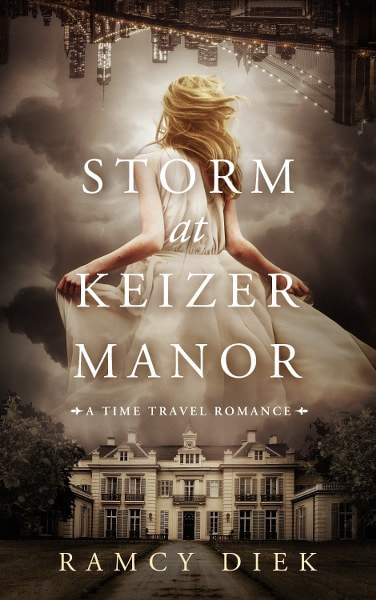 While college graduate Forrest tries to find a job, quick witted Annet works at the Keizer Manor, the museum where the oils from 19th century master painter Alexander Keizer are exhibited.

After a fight, the couple strolls through the dunes to talk. When dark clouds roll in, the beautiful sunny weather turns into a thunderstorm so violent that they get separated.

The next morning, Forrest finds himself alone. So does Annet.

Regaining consciousness in a monastery, Annet is convinced the nuns are playing a prank on her. It can’t be the 1800’s! She’s a pregnant Twenty-first Century woman and doesn’t belong there. But how will she get back to her own time?

Ramcy Diek fell in love with the United States during her travels with her husband. The Pacific Northwest became the Dutch couple’s home, where they built their RV Park and raised their two sons.

During this time, Ramcy also made a slow transition from reader to multi-genre writer. Her debut novel Storm at Keizer Manor received multiple awards. This inspired her to spend more time doing what she loves most: writing stories.

Eagles in Flight, a romantic suspense novel, is her second book. Her third novel Overland, a romantic and dramatic thriller, followed soon after.