It is book 6 in the Juxtan series.

The story does not  end on a cliffhanger.

Hadrian and his friends may have survived the encounter with Theon, but they paid a heavy price in the end. They need time to heal, both physically and emotionally. Unexpectedly, while recuperating in a small mountain town, they encounter the most powerful man in the land, who offers them protection and much-needed medical aid. The timing is fortuitous, but what secrets does this mountain palace hold? Is it truly a refuge, or is it soon to become their stone prison?

“My tongue wants to be inside your arse,” Caled whispered hotly.

“What?!” Hadrian looked around, panicked. “Stop it. Don’t say another word.” He pushed blindly through the street, trying to put the mercenary behind him but Caled hounded him like a shadow.

Fingers brushed the hair off the back of his neck and were quickly replaced by soft, warm lips. Hadrian moaned and struggled to keep walking, ignoring the few curious looks they garnered.

A hand caught his shoulder and spun him around. Hadrian stumbled, but only fell back against the wall of a nearby building. Caled immediately loomed over him, both hands planted on either side of Hadrian’s head.

“I want you.” The mercenary’s blue eyes were the color of the edge of night. He wedged his thigh between Hadrian’s and pushed it against his crotch. “I want you in every manner I can have you.”

Hadrian clutched the other man’s shoulders, wanting to push him away in shock, but unable to loosen his fingers. Caled’s passion was infectious.

But at the back of Hadrian’s mind a voice questioned the mercenary’s overwhelming ardor. Why would it spring up now, in the middle of the afternoon on a crowded street?

“Where did you go this morning?” he asked.

Caled paused only for a moment before resuming his slow rub between Hadrian’s legs. “Doesn’t matter. Nothing matters now except getting us naked.”

Hadrian straightened his arms, moving Caled back. “Please don’t lie to me. I need to trust you.”

Pain flitted across Caled’s features before he looked away. “I was looking for something.”

A muscle rippled in Caled’s jaw. “A gift. For you.”

“For me? But why—” Hadrian caught himself.

Until now he’d not wanted to acknowledge the change he’d sensed in Caled. It was a softening. No, it was a soft spot within the mercenary that the man was evidently terrified of recognizing within himself. Hadrian could trace its formation—the night they believed Gam and Lio had been killed.

“I’m not going anywhere,” Hadrian told him. He cupped a cheek that sparkled with golden stubble. “Not ever.”

Caled shifted his weight from foot to foot, unusually restless. “I didn’t think you were.”

“I don’t require a gift to stay by your side.”

He frowned. “That’s not why I wanted to give you one.”

Hadrian leaned up and lightly touched his lips to the older man’s. “I know that you love me, Caledon ni Agthon.”

The mercenary closed his eyes and held Hadrian’s gloved hand to his cheek. “No. Don’t use that name,” he whispered. “Not until it’s over. I can’t be that man until then.”

Hadrian kissed him again. “You will always be the man I fell in love with, then and now. Deep down, you haven’t changed at all. That’s why I’ll never leave you.”

The soft entreaty stabbed Hadrian through the heart. “I’d be a fool to do so. Are you calling me a fool?”

A smile curved Caled’s lips before he opened his eyes again. “Not a fool. Perfect. Sweet and delicious.” He took the initiative to brush his lips over Hadrian’s. “Which is why I must taste you this instant.”

Tricia Owens has been writing m/m fiction since 2000, after stumbling onto the term ‘slash’ and thinking it referred to horror stories. She is the author of the Sin City, A Pirate’s Life for Me, and Juxtapose City series, among several others. She lives in Las Vegas.

Book Title: The Prince and the Ice King

It can be read alone but is the first book in a series.

This is book 1 of Tales from the Gemstone Kingdoms. 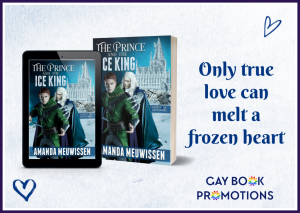 Only true love can melt a frozen heart.

Every Winter Solstice, the Emerald Kingdom sends the dreaded Ice King a sacrifice—a corrupt soul, a criminal, a deviant, or someone touched by magic. Prince Reardon has always loathed this tradition, partly because he dreams of love with another man instead of a future queen.

Then Reardon’s best friend is discovered as a witch and sent to the Frozen Kingdom as tribute.

Reardon sets out to rescue him, willing to battle and kill the Ice King if that’s what it takes. But nothing could prepare him for what he finds in the Frozen Kingdom—a cursed land filled with magic… and a camaraderie Reardon has never known. Over this strange, warm community presides the enigmatic Ice King himself, a man his subjects call Jack. A man with skin made of ice, whose very touch can stop a beating heart.

A man Reardon finds himself inexplicably drawn to.

Jack doesn’t trust Reardon. But when Reardon begins spending long days with him, vowing to prove himself and break the curse, Jack begins to hope. Can love and forgiveness melt the ice around Jack’s heart?

“I’ll call you Majesty until we trust each other. But on that day, I will call you Jack.”

“Is this a game to you?” The Ice King straightened. Reardon stood almost directly before the throne now, chilled and shivering but without any creeping frost on his hair or clothes. “What do you hope to accomplish?”

“My father is wrong for what he does, but seeing this curse on you makes me wonder if he is right about magic’s corruption, despite all the wonders it can do.”

“Magic alone did not curse us!” the king roared. “One person who wielded it did, and I brought her wrath upon me myself.”

That gave Reardon pause. There was so much he didn’t know. “You could tell me your story.”

“It is a long one, little prince, and I grow weary of your presence already.” He stood, crunching down the steps between Reardon and the throne and bringing a gust of icy wind with him.

Reardon sensed how close he was to death but stood his ground. “I only want to bring my people home.”

“And where are they supposed to go? Home, you say. The thief who almost lost her hands because she was starving, the man who lusted after the wrong noble’s son, your friend who has visions—do they have a home to go back to when their own people cast them out as villains?”

“Good for you. You only cared once it finally affected someone you knew.”

Reardon’s fists clenched to be called a heartless coward, but he’d called himself worse this past year.

He also couldn’t overlook the example of a man and a noble’s son.

“I suppose you’ve taken in all the corrupted, haven’t you?”

“I only speak as I was taught. I don’t agree with it. I don’t believe they’re corrupt. Not any of them. I don’t want to. If my father understood—”

“He’d still keep up the status quo. Your kingdom shuns what they don’t understand because of my curse, yet they don’t even remember the time before.”

“So tell me! Let me know the truth so we can learn from our past instead of continuing to repeat it.” Reardon stepped forward—too close, he knew—but like before, instead of reaching out and ending him, the Ice King backed away. “You’d really let them all go, wouldn’t you? If they wanted it?”

“They don’t, but you are welcome to ask them, including your friend.”

“Then I am not a prisoner either?”

“That is up for debate.”

If Barclay had seen Reardon’s death in his vision, it couldn’t be now. Not yet. “Give me the chance to prove I will go back and change things for the better. I’ll stay for as long as it takes, but once you believe me, once you know me and I know you, let me go.”

“And what if I never believe you? You’re the prince. You could bring an army to my door after learning my secrets.”

“If you never believe me… then you either have another servant or another statue to crush. But that means you take an audience with me every day.”

The king scoffed, turning to stomp back up to his throne and throw himself onto it with an elegant ease that should have been impossible. “Sounds frightfully dull.”

“Yes, I can see your calendar is quite full.”

He rumbled with laughter like a brewing winter storm.

For a long stretch of minutes, he stared at Reardon with his uniquely human eyes—different from his companions. The Ice King was more tied to his humanity, even if he’d lost the feeling of it in his heart, and more cursed and tortured because of it, perhaps.

Yet still he said, “Fine. But make no mistake, little prince, if you prove unworthy or attempt to betray me, I will not hesitate to turn you into frozen rubble like that thief.”

All Reardon could do was return his stare and wonder—What was this curse? Why had it been cast? And what had the king been like before it changed him and his kingdom? He had to know, even if a mysterious and frightening future stretched out before him.

Love, death, and blue eyes in a sea of white.

“You have a deal, Your Majesty.”

Amanda Meuwissen is a bisexual author, with a primary focus on M/M romance. As author of the paranormal romance trilogy The Incubus Saga and several other titles with various publishers, Amanda regularly attends local comic conventions for fun and to meet with fans, where she will often be seen in costume as one of her favorite fictional characters. She lives in Minneapolis, Minnesota, with her husband, John, and their cat, Helga.

one free eBook copy of any title from Amanda Meuwissen’s backlist.