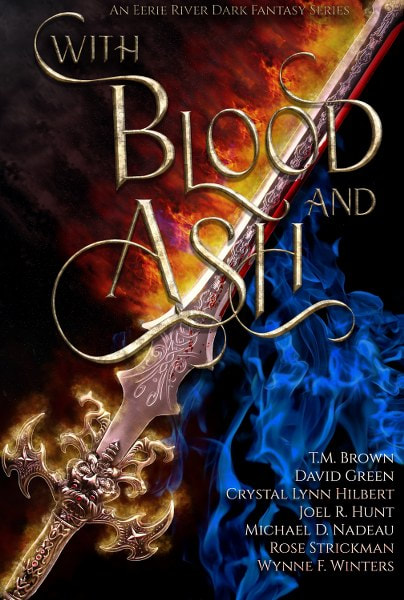 What if the curse of magic could destroy the world?
With Blood and Ash is the first of two volumes taking us on this journey of deadly magic, non-stop action, and adventures into new and exciting worlds.
Delve into this anthology featuring seven gripping tales of dark magic. Experience love and loss, death and wizardry as worlds are rent asunder.
Evil is rising, and hope is almost lost. Will anyone be able to stop it?
David Green – “Master and Apprentice”: He was supposed to be her father-figure and teacher, but instead he broke the world. Now he wants her back, and is willing to pay any cost.
Joel R. Hunt – “Fire and Wisdom”: When sent to investigate a series of disturbances in the outer territories, the elite wizard Lorus, along with his fire elemental familiar Red, discovers a secret that will test his skills, his loyalty and his understanding of what it is to be human.
T.M. Brown – “The Hounds of Everspire”: Raimund Plesner is a Sentinel, a warrior trained to hunt down and kill those demonstrating arcane proficiencies. He soon finds himself caught up in a broader conspiracy which not only threatens his entire Order, but the very foundations of the Empire itself. His only hope is to face the events of his past and strike back hard against the Coven before it’s too late.
Michael D. Nadeau -“The Child of Fire”: Set in the real world, a young girl discovers a hidden realm called Lyria. It exists parallel to our own universe, and a destructive force is waiting to destroy us all.
Wynne F. Winters – “The Spring in the Desert”: There is a world of drought and destruction, where magic is currency and water is life. What dark mysteries await you there?
Crystal Lynn Hilbert – “What We Were Made”: For years a vengeful woman slumbered, and now she awaits the offspring of her enemies to return to the forest so she can enact her revenge.
Rose Strickman – “The Monster of Carroch”: Children have always disappeared around Carroch Peak, but when Callum McRathray’s son vanishes then it’s time for the wild magician to face the monster who dwells deep within the mountain.
With Blood and Ash is the first of two volumes in The Curse of Blood Magic collection. This anthology can be read by itself, or alongside the second volume “With Bone and Iron”.
**Only .99 cents!!**
Add to Goodreads
Amazon * Books2Read

Rose Strickman
The Monster of Carroch
“Alastair? Alastair!” Callum’s voice echoed off the cave walls, fading away, transfiguring into something like deep laughter, a malicious cackle, before dying in the dark heart of the mountain.
Callum drew his knife; blade at the ready and torch in hand, he pressed deeper into the darkness.
Twice he slipped and nearly fell, only just recovering himself. A roar began to build, the sound of torrential waters pounding around him. Callum grimaced, feet already soaked from the cave’s stream, but kept going. His senses, sharpened by the darkness and stillness of the cavern, told him that there was another human presence here, and not far away. His heart hammered, loud enough it seemed, to echo against the stone.
The passageway squeezed tightly around him, narrowing until he was wriggling more than walking. He was crawling through the cracks until, with one final struggle, he pushed through the passageway, buttons scraping off as he stumbled into a wide, open chamber.
The cave stretched away, far beyond the reach of his torch. The waterfall’s sound was deafening here, thundering into deep water. Callum stepped forward, feet splashing, and saw the waterfall at last.
What had sounded like a huge cataract was only a foot high. The water foamed over a shallow shelf of stone, the cave’s acoustics making it sound like a vast fall, but Callum had no eyes for the waterfall. For there, curled up on a stone island in the middle of the pool, lay Alastair.
The boy lay asleep or unconscious, dark curls tumbling down, face thin and strained even while unconscious. He stirred, murmuring, and Callum nearly collapsed in relief. “Alastair,” he called, but the boy didn’t stir.
Callum started forward, wading into the pool only to freeze as dim forms emerged from the depths. They curled around him, fish-like and serpentine. The elementals of Water bared their fangs at him, scales flashing in their own weird, eldritch light. On the stone island, Earth elementals gathered around the boy, teeth sharp and wet as they snarled at Callum.
He retreated, splashing back out of the pool onto the narrow shore. For a moment he regarded the scene: shallow waterfall, sleeping boy, vicious elementals. Then he let out a barking, humorless laugh. 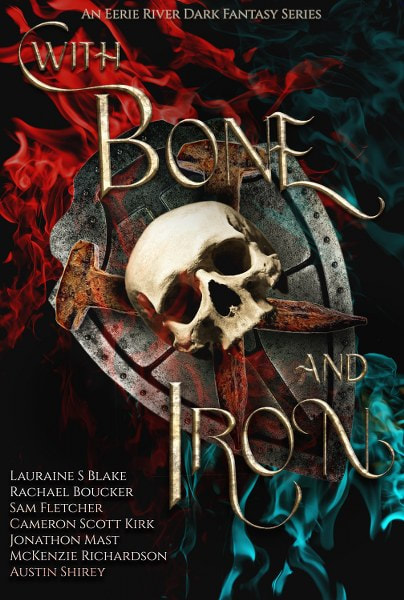 What if the curse of magic could destroy the world?
With Bone and Iron is the second volume in the Curse of Blood Magic collection. Join us on this journey of deadly magic, non-stop action, and adventures to new and exciting worlds.
Delve into this anthology featuring seven gripping tales of dark magic. Experience love and loss, death and wizardry as worlds are rent asunder.
Evil is rising, and hope is almost lost. Will anyone be able to stop it?
McKenzie Richardson: With Stunted Wings
Sam Fletcher: Morgan’s Story
Austin Shirey: The Hound of Oakenhall
Rachael Boucker: Dith the fire witch: A Night Order story
C S Kirk: Black Lake Tower
Jonathon Mast: Dowser in a Dead Town
Lauraine S Blake: Fury: A Tale of the Wilder Light
“The Hound of Oakenhall” – When a masterless knight takes a contract to kill an invincible beast, he is thrust into a mystery where nothing—even the monster—is what it seems…
Morgan Bane, the heir of Bane’s Academy of akashic magic, has found more love in Tatu’s crime syndicate than his own family. Mostly consisting of an oppressed goblin race, the Syndicate is skeptical of a boy with so much privilege. To prove his loyalty, Morgan must sever the hand of Graft Agoseris, the most bloodthirsty enforcer on the island and, more importantly, the father of his first love. Death in all families is inevitable, and Morgan must make the final choice between them.
“With Stunted Wings”, follows a pair of unconventional twins, fairies each born with only one full wing as they navigate a world designed around flight. Blending their elemental powers with potions, resurrection spells, and soul magic, they explore just how far one will go to get what they’ve always desired.
“Dith the fire witch: A Night Order story” In this preindustrial world, humans have been pushed to the brink of extinction. Only witches and rogues have the skill to take on the demon hordes. Edith, Dith to some, has been blood gifted the rare magic of fire. Whether the hunt leads her into the depths of a drowner lake or skin-wearer infested woods, she’ll walk away with demon heads. But the demons are once again rallying armies, and Dith can’t take them all on by herself.
**Only .99 cents!!**
Add to Goodreads
Amazon * Books2Read