I was a beauty, a stray orphan until the beast took me as his hostage.

Once upon a time…
A Don by the name of Vlad Vitalli ruled New York. He’s a mafia man. The leader of one of the ruling families, La Cosa Nostra. He’s a monster. A trained killer and a cold-blooded murderer. Tall, mysterious, with icy gray eyes, and he rarely smiles. His smile was made to fool any girl. He’s ruthless, cold, dangerous, and wants to kill me.

I was the wrong person at the wrong time.
Just an innocent at the masquerade ball. The mafia has rules: no witnesses left behind. To save my life, I made a deal with the beast. I handed myself to the cruelest man in the kingdom.

For him, It was supposed to be an easy kill. I’m an orphan raised in poverty. No one would have missed me. Just as the Don Vlad was about to order the hit, I threw off my masquerade mask, revealing my face, and offered myself to him. One look and I was doomed. He took me as his hostage. His captive. He didn’t know by taking me, Dahlia Hadid, he sealed his own fate.

Welcome to New York’s Underworld.
Loosely based on the fairytale. 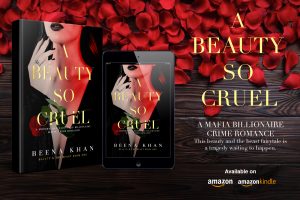 After a few moments, Gabriele turned to look at Vlad. “You think that’s the best decision? The girl has seen our faces,” he said quietly, jerking his head in her direction.

“Dahlia heard our names and saw our faces, yet you didn’t let her walk free,” Gabriele accused him.

Vlad’s eyes narrowed down at his cousin, but Gabriele’s expression didn’t match his tone, it was playful and teasing.

“Mind your own damn business,” Vlad scoffed at him.

Gabriele shrugged in response. Then, his expression turned serious. “Have you touched her, Brother?” Gabriele called Vlad brother privately, since they were blood relatives.

Vlad only frowned, not taking the bait.

Gabriele chuckled then, his eyes lighting up. “You haven’t touched her.”

It was a statement now, not a question.

“You talk too much,” Vlad shot at Gabriele, shoving his hands inside his pants.
Gabriele’s smirk widened now. “Why not though? I mean, she is…pretty.” Then, he raised his eyebrows as if egging Vlad on.

Rage filled Vlad’s heart before he turned on Gabriele, but his cousin didn’t cower before him. He didn’t fear Vlad like the others did since they had grown up together. They didn’t hurt their own blood.

“Look at her again, and I will rip your eyes out,” Vlad growled at him, losing his cool.

Gabriele raised his hands in surrender, yet he was still smiling. “I’ve never seen you so affected by a girl before.”

Vlad pressed his lips together before growling again, “You’re lucky you’re my blood.” Then, he turned his back on Gabriele, heading toward his car. Beena Khan writes literary fiction and edgy, contemporary romance. She 27 years old and lives in New York. She’s from Azad Kashmir, Pakistan, an immigrant who moved to New York when she was five years old. She currently holds a Masters Degree in Developmental Psychology. She enjoys reading, writing, and netflixing. The Name of Red is her debut novel published at the age of 26. All of her books are on Kindle Unlimited + Free Novella!