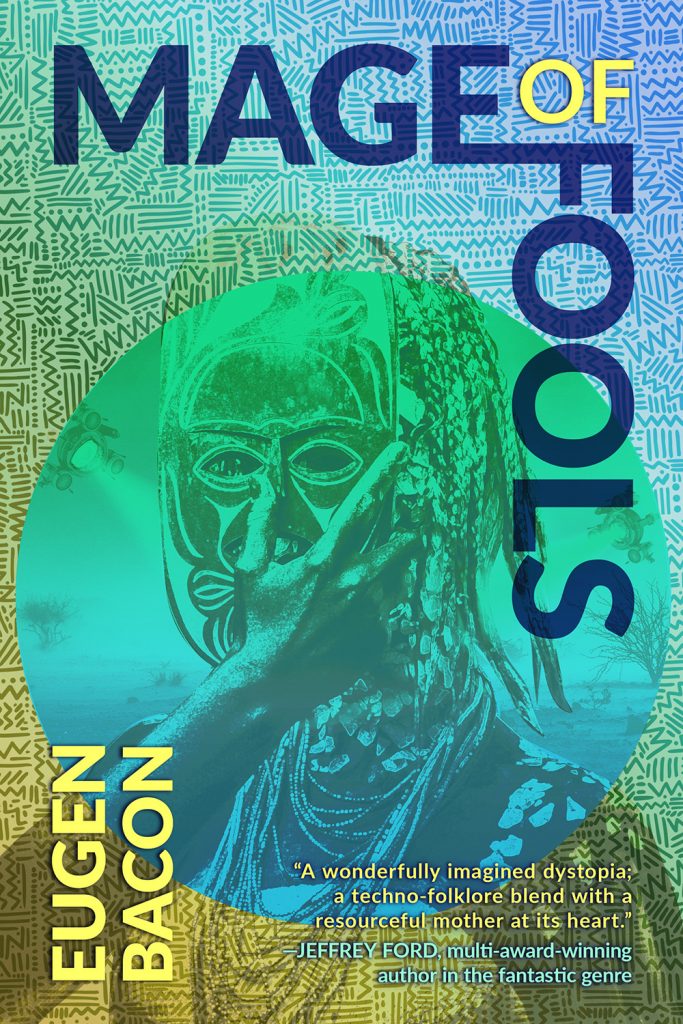 In the dystopian world of Mafinga, Jasmin must contend with a dictator’s sorcerer to cleanse the socialist state of its deadly pollution.

Mafinga’s malevolent king dislikes books and, together with his sorcerer Atari, has collapsed the environment to almost uninhabitable. The sun has killed all the able men, including Jasmin’s husband Godi. But Jasmin has Godi’s secret story machine that tells of a better world, far different from the wastelands of Mafinga. Jasmin’s crime for possessing the machine and its forbidden literature filled with subversive text is punishable by death. Fate grants a cruel reprieve in the service of a childless queen who claims Jasmin’s children as her own. Jasmin is powerless—until she discovers secrets behind the king and his sorcerer.

Outside the double-glazed window, a speck grows from the moonless night and yawns wide, wider, until its luster washes into the single-roomed space, rectangular and monolithic. One could mistake the room for a cargo container.

The space, one of many units neatly rowed and paralleled in Ujamaa Village, pulses for a moment as the radiance outside grows with its flicker of green, yellow and bronze. The cocktail of incandescent light tugs along a tail of heat. Both light and heat seep through the walls of the khaki-colored shelter, whose metallic sheen is a fabrication, not at all metal.

Light through the window on the short face of the house—the side that gazes toward Central District in the distance—rests on the luminous faces of a mother and her two young children, their eyes pale with deficiency in a ravaged world. It’s a world of citizens packed as goods in units whose short faces all stare toward the Central District that will shortly awaken in the dead of the night. The light drowns the toddler’s cry of wonder.

As sudden as the ray’s emergence, it evanesces and snatches away its radiance, leaving behind hoarfrost silence. A sound unscrolls itself from the darkness outside. First, it’s a thunderhead writing itself through desert country—because this world is dry and naked, barren as its queen.

The lone cry of a wounded creature, a howl or a wail reminiscent of the screech of a black-capped owl, plaintive yet soulful, rises above the flat roofs screening the wasted village. The cry is a dirge that tells an often-story of someone in agony, of a hand stretched out to touch an angel of saving but never reaches. A second thunderhead slits the sound midcry, nobody can save the mortally wounded one.

Jasmin closes her eyes. She needs no one to tell her. She knows.

Everybody knows—except the children. That King Magu’s guards—so few of them, yet so deadly—have found another story machine, and its reader.

“Siyent yight,” says two-year-old Mia. Her owl eyes—evolved to navigate darkness—gaze into Jasmin’s. But they are eyes that are also glows: they not only see but soak light to illuminate her world.

Jasmin does not speak. She’s unpacking the reality of what’s just happened. She is overwhelmed by an emotion that’s not yet rage. Her ears are ringing, a child’s sound toy, but there are no more toys in Mafinga. The country’s reality is cold, gray. Its wind vibrates with the dirge of a better yesterday. It’s a world gone dumb—must all be broken? The bones of the ancestors pop with metamorphic hymns of water that is ruler and land that is slave, as people degenerate into crustaceans.

“The sirens are coming,” says Omar in his grown-up voice. Even at four, he hasn’t outgrown the burst of curls on his head. His pale chocolate skin is still baby soft.

She glances at the children still hugged to her hips. They too are readers, partaking of the story machine, they just don’t know it yet. Each time she narrates from the device—

She closes her eyes, unwilling to fathom how much she has endangered them with her oral tales.

He peels himself from gazing at the world out there.

The children know about goats. The goats from the stories Jasmin tells them. Tales of animals so calm, you think they are stupid, but their working minds sharpen with each bleat. Despite their odd pupil shape, how unsettling to a human eye, goats are intelligent beneath the horn.

Jasmin watches as Omar navigates the space between the unpartitioned living area with its metal-like seats and spartan table, its kitchenette with a tiny chiller and microwave, its multipurpose sink, the sleeping area with its floored mattress, its toilet—only a curtain for privacy. One wall is fitted with an automated screen that turns itself on, off at central command. You don’t flick channels to choose the news, sports, documentaries, music or entertainment. Pzzz. Pzzz. The screen comes on at a whim with the propaganda of the moment: sometimes it’s a choir of children in flowing pinafores and jester pantaloons singing slogans. Or the same children in sisal skirts and war paint doing a folk dance, chanting the Hau, Hau, Acha We song about decrying dissenters. Pzzz. Pzzz. The screen goes silent as it does now, momentarily asleep.

All units in Ujamaa Village are the same. They are metallic khaki in color. Everyone’s within a kick, right there, next door. But you never hear anything—except the outside. And, mostly, as just then, the outside world brings the sound of dying.

Once a week you get a pass to use the Ujamaa Facility. It used to have gendered showers: hot sizzles and soap dispensers, a luxury despite the blandness of their products. But there are no more men in the village. Now the sizzler showers and their weekly extravagance are for everyone. There’s no place for modesty.

What inspired you to write this book?
I really wanted to write an Afrofuturistic novel, it was just something I wanted to do. It took a while for the idea to form, clarity on where the story might go, and it leaned towards dystopia.

Unlike everything I’ve ever done, this one started with a title: Mage of Fools—way before I knew what I was going to write.

What, if anything, did you learn when writing the book?
I remembered that writing a novel is bloody hard! I am mostly a short story writer, and I use a model of stories-within-a-story to craft a novel. Often, I tuck little stories and poems inside, layered vignettes invisible to the reader, and they carry the mutability and intensity of a short story, which seems to power my longer forms.

What surprised you the most in writing it?
I was astonished how much I connected with the characters, and how they wrote their own stories. I finished the first draft of the manuscript in three months of straight writing, on top of other writing, editing, and a day job. I was married to my text.

If it’s not a spoiler, what does the title mean?
It is a spoiler. Somewhere in the novel, someone says it, and the meaning is evident.

Were any of the characters inspired by real people? If so, do they know?
“The transformation of Mafinga happened seemingly overnight. People became their own labor, coerced into the spirit of Ujamaa.”—excerpt, Mage of Fools.

King Magu is the caricature of a past president of Tanzania, my birthplace, who was somewhat of a dictator. He’s long dead now, so it’s best that I don’t dwell on him.

When the United Republic of Tanzania first gained colonial independence under its first president Julius Kambarage Nyerere, it was a socialist country that adopted the premise of ‘ujamaa’, sharing and togetherness.

Ideally, ujamaa should have worked—it’s a beautiful and generous concept. In practice, it created corruption and one of the poorest countries in the world.

Do you consider the book to have a lesson or moral?
Mage of Fools is a story about the spirit of humanity, and free will. It’s about hopes and dreams, country, liberty and belonging. A secret story machine tells of fate, love and promise, charted by bold authors and their indelible scripts.

Jeffrey Ford, in the book’s commendation, captures it best:

“Eugen Bacon’s unique vision, Mage of Fools, is a wonderfully imagined dystopia; a techno/folklore blend with a resourceful mother at its heart.”

What is your favorite part of the book?
I honestly like them all, but I took special delight in Atari’s story—developing this character who needs so much, until his needing becomes destruction.

Which character was most challenging to create? Why?
I felt all the major characters in Mage of Fools. I find immersion in writing, and I morphed as I wrote, becoming Jasmin, becoming her lover Solo, her husband Godi, the deadly Atari, Queen Sheeba, the children Mia and Omar… I connected deeply with each of them, and I think it helps in the robustness of their characters.

I’d say that, perhaps, the secondary characters who needed to play a role, albeit small, were a little challenging: keeping their roles minimal yet relevant.

What are your immediate future plans?
I have books spilling out, it’s not funny. In 2022, there’s Chasing Whispers, a story collection by Raw Dog Screaming Press, and An Earnest Blackness, an essay collection by Anti-Oedipus Press. I have finished a cross-lingual hybrid project (Languages of Water) that’s just entering the publication process, and I am co-writing a time travel novel with European slipstream author Andrew Hook. 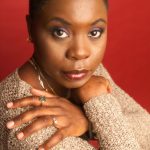