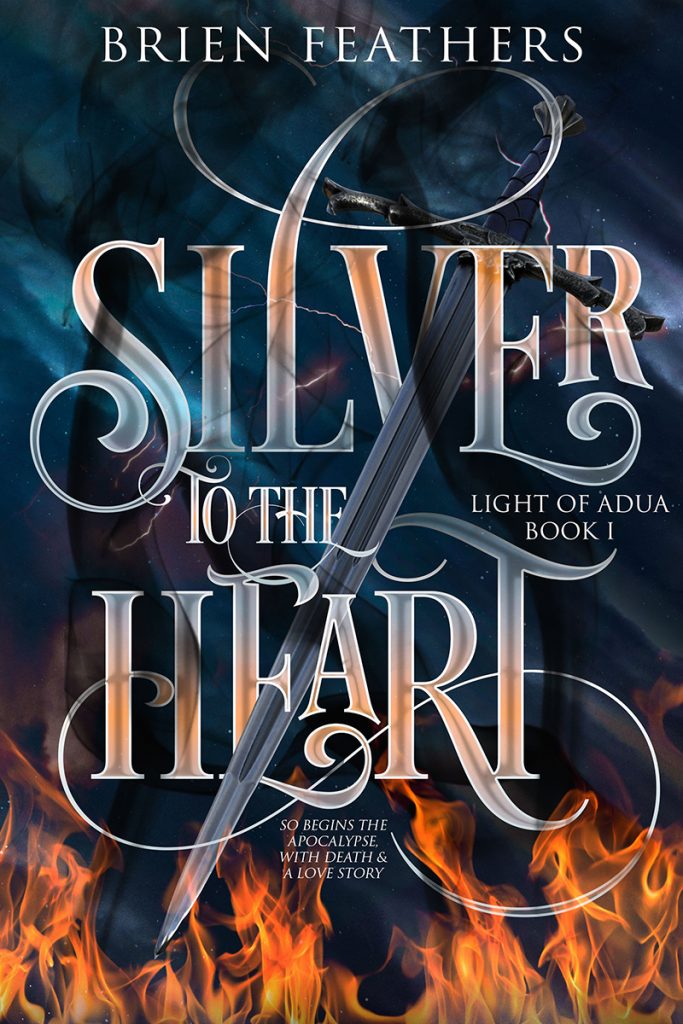 Silver to the Heart
by Brien Feathers
Genre: Dark fantasy, urban fantasy (adult, not YA)

— So begins the apocalypse, with death and a story of love —

An old soul (several centuries old), the lover, fighter, and telekinetic Drake receives an order to safeguard Ana, a mortal with Elder Talent.

Ana, an artist beset by haunting visions, falls for the perfect stranger while venturing home to mediate emergent family chaos.

Past-warlord and present commander Sasuke wields his telepathic might to outwit Council traitors in an effort to save the human realm and its Guardian from a new Dark War.

Criminal and light bender Lou, now sought by the Council to answer for his sins, seeks shelter with the Reverend—an Elder fit to bypass rules of magic meant to be unbreakable.

As time’s last grains of sand deplete, an ancient battle may renew, with pieces of the fractured realm imperiling man’s modern world. Though few on Earth are cognizant, dark days now lie ahead. . .

NOTE: This book is free.

Drake held her around her waist with one arm. He needed at least one hand free. Seeing the harbor maybe 100 yards away, he landed them on the roof of a nearby building. With his Push, he broke their fall with a moment of levitation—Ana shrieked.

“Ana, you have to stay quiet, I have to be able to hear the arrows.” Preferably when he first releases one, so I can find him.

“What the hell is happening!” Not quiet, but loud. “Drake!” Still loud.

Drake couldn’t hear the Aerian or the arrows—they needed to take cover. As he leaped again with Ana, something grabbed his leg and swiped them into the side of a building. Midair, he turned to put himself in between the building and Ana and felt the impact as they slammed into it.

Pushing against the wall, he leaped with Ana as more arrows whizzed toward them. One, two, three arrows, one after another, struck the cement wall instead of them and fell to the ground harmlessly. They couldn’t kill Drake this way, but he didn’t want Ana hurt. He needed to take down that Aerian, but couldn’t leave Ana behind. In his decision to break direct order not to engage, he hadn’t accounted for Ana. Drake still wanted to capture one of the soldiers—alive, to inquire about the Reverend, but carrying Ana around like screaming luggage, this fight wasn’t going the way he wanted.

1. Tell us a little about how this story first came to be. Did it start with an image, a voice, a concept, a dilemma or something else?
The story that became ‘Silver to the Heart’, Book 1 of the Light of Adua dark fantasy series set in modern-day New Orleans, came to be from a single image— as most of my ideas do. I first see the scene that would become the central theme of the book or the film (I’m a screenwriter as well) as it unfolds. The rest of the time is spent discovering who they are and what’s happening: the characters, and the plot in essence.

For Book 1, the first scene I’ve seen was of Drake and Ana. He was a vampire and Ana was human. He was hurt, and I knew they’d lost a fight to something much bigger and nastier than himself. Although the initial scene I saw was in a hallway of Ana’s apartment, in the book it ended up being very different.

In the book, Drake gets kidnapped and imprisoned in a church basement in Texas, and Ana goes to rescue him. He frightens her using Talent (magic) and this is where she accepts what he is: a vampire or an Elder.

2. What, if anything, did you learn when writing the book?
Uuf, what an arduous but wondrous journey it has been. As a screenwriter, the beats, arcs, character motivations, settings, and theme— the moving parts that make the engine of the story become ingrained in the way you construct your writing; however, as an author, the craft of writing is very different. The heart of the story remains the same, of course, but I found that an author is not only the writer but also the director, the actors, the composer, and the whole nine yards. I learned this the hard way.

3. What surprised you the most in writing it?
Some of the characters for the series have lived rent-free in my head for years, which was one of the reasons I wanted to write the book, to tell their stories so they may live in another’s head as well. But most of the characters were conceived new for ‘Silver to the Heart,’ and it surprised me how quickly I’ve gotten attached to them.

I don’t start the story if I don’t see the ending. In that regard my characters had set arcs, an inevitable trajectory they’re on from the very beginning, of which some are tragic. As I was writing book 5, I had an incredible difficulty seeing through it. I didn’t want to cheat the character by robbing them of their arc, but… it was hard to let them go. I can’t say more without spoiling the series.

4. What does the title mean?
Silver, the size of a spearhead thrust through the heart, clean separation of the head from the body, or destruction of body and head altogether: those are the only three ways to kill an Elder or a vampire. Thus, the title, ‘Silver to the Heart.’

6. Do you consider the book to have a lesson or moral?
Although it hadn’t been intentional in the beginning, a theme emerged as I wrote the series: what is kindness? Is it different than politeness? Can you be kind and vicious at once? There is no intentional message because I don’t fancy myself a preacher, but the story itself asks questions about duty, honor, and how far one can go in the name of it and still be justified.

7. What is your favorite part of the book?
In ‘Silver to the Heart’, there is a chapter called, ‘Farewell, Father,’ and it is my absolute favorite. The book being perma-free, perhaps you’d like to check it out (hopeful thoughts and pleading puppy face)?

8. Which character was most challenging to create? Why?
In book 1, the most challenging character for me was Sasuke. He is a five-hundred-year-old Elder, who in human life had been a warlord in Japan. In the beginning, he just wouldn’t speak to me, and I had a hard time understanding him. But as the series progressed, he became my favorite, and in book 3, he is a prominent point of view character.

9. What are your immediate future plans?
I’ve just finished Book 5 of the Adua series, so Books 6 and 7 are in my immediate future— that will complete the series. Then I have a trilogy in mind.
Thank you for having me here, and I hope you’d give the series a chance.

However, I do have reader warning for mature content mainly for language and violence: centuries-old characters with various wounds, all wielding magic are at war with each other, so violence does tend to come naturally to the story. Although not gratuitous, pain and endurance is a reoccurring theme as well.

So, if that is all right, please give it a shot, and here is a wave all the way from Mongolia. I’m Mongolian by the way, and I live there. Thanks again, for having me here. 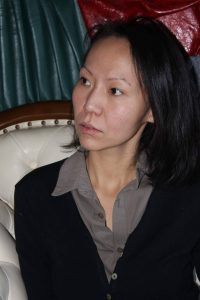 Brien Feathers is a fantasy author living in the land of permanent frost, horses, and Mongols. She likes reading, writing (of course), riding (horses and husbands), drinking dark beer, and checking things off a to-do list.

Although she claims to love everyone equally, she really loves her youngest son the most. He has autism superpowers that allow him to speak all types of rare languages including drumbeats, elevator dings, and police sirens.

Miss Feathers loves grey days, orange cats, and all creatures human or otherwise. And she hopes you will love her world (fantasy) and people (characters) as well.

Brien Feathers will be awarding $30 Amazon/BN GC to a randomly drawn winner via rafflecopter during the tour.