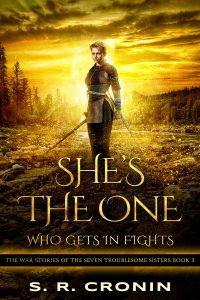 She’s the One that Gets in Fights
(War Stories of the Seven Troublesome Sisters, #3)
by S.R. Cronin
Genre: Historical Fantasy

Sulphur knows hers. This 13th-century woman has trained as a fighter all her life in hopes of joining the army. Then, within days, both of her older sisters announce plans and suddenly Sulphur is expected to find a man to marry instead.

Is it her good fortune her homeland is gripped by fear of a pending invasion and the army now goes door to door encouraging recruits? Sulphur thinks it is. But once she’s forced to kill in a small skirmish, she’s ready to rethink her career decision. Too bad it’s too late. The invasion is coming, and Ilari needs every good soldier it has.

Once Sulphur learns Ilari’s army has made the strategic decision to not defend certain parts of the realm, including the one where her family lives, she has to re-evaluate her loyalty. Is it with the military she’s always admired? Or is it with her sisters, who are hatching a plan to defend their homeland with magic?

The problem with being a woman who fights for what’s right is that now, she has to figure out what is.

(The War Stories of the Seven Troublesome Sisters consists of seven short companion novels. Each tells the personal story and perspective of one of seven radically different sisters in the 1200s as they prepare for an invasion of their realm. While these historical fantasy/alternate history books can be enjoyed as stand-alone novels, together they tell the full story of how Ilari survived.)

I came back to the farm in better spirits, although I held no hope that Coral could make good on her promise. I returned to my routine of chores and workouts and tried not to think too much about the future. Dad hadn’t returned yet, but I felt ready to face him when he did.

A few days later, as I chopped wood in front of the house, he rode up still dressed in the soft grey wools and leathers often worn by teachers, and never worn by farmers. I knew he’d want to change his clothes right away.

He must have noticed the wistful look on my face though as he dismounted because he waved for me to follow him to the barn as he tended to his horse. There my story came tumbling out for the second time. Perhaps I found it easier to tell my father the scholar than my father the farmer.

“Did you know about this sponsorship thing?”

“Sort of. I mean I had the impression it helped an applicant, but wasn’t a requirement. I didn’t mention it to you because I didn’t know where you’d get a sponsor.”

“So you don’t know anyone who could help me?”

“No, but now that we know how important it is, I’ll ask around. Maybe someone I know knows someone.” He looked dubious and I wondered if he only said it because he sensed how close to despair I’d come.

Then, one clear, cool autumn morning a few days later, three Svadlu arrived at our farm and I discovered times had changed. My worries had become completely unfounded.

She’s made a lot of stops along the way to writing these novels. She’s lived in seven cities, visited forty-six countries, and worked as a waitress, technical writer, and geophysicist. Now she answers a hot-line. Along the way, she’s lost several cats but acquired a husband who still loves her and three kids who’ve grown up just fine, both despite how eccentric she is.

S. R. Cronin will be awarding a $25 Amazon or B/N GC to a randomly drawn winner via rafflecopter during the tour.

9 Replies to “Spotlight & Excerpt: She’s the One that Gets in Fights + Giveaway”