I am thrilled to be hosting a spot on the SHADOW BOUND SOULS by Steven Rudy Blog Tour hosted by Rockstar Book Tours. Check out my post and make sure to enter the giveaway! Link in bio. 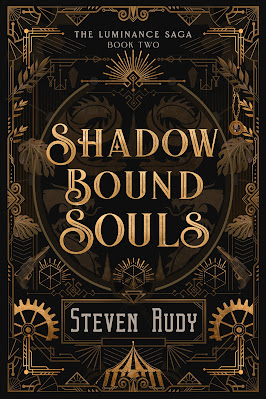 The frontier of alchemy, magic and machines nears a breaking point.

Book two of The Luminance Saga is an action-packed sci-fi fantasy adventure, charged with a tension inherited from the epic climax of book one. Shadow Bound Souls picks up where the first novel left off, with a band of heroes stranded in a world on the brink of war.

The Sagean Lord has emerged.
While the Wrythen’s influence grows stronger, the Sagean and his power hungry acolytes, the Court of Dragons, are intent on delivering the gem of souls to the Temple of Ama; where the Sintering Fountain can transform the acolytes into Luminaries.

Meanwhile, the band of heroes find themselves separated in a world starting to tear itself apart. Having suffered a huge loss, Ellaria and Elias must escape the Mainland with the Sagean’s agents pursuing them. When Elias becomes sick, Ellaria decides to hide amongst the Showman’s Traveling Show of Wonders. But their journey is shadowed by darkness and when troupe members turn up murdered, Ellaria struggles to find the killer amongst her company.

Far away in the Warhawk Mountains, the three young rogues are stranded with the Tempest Stone. Aimless about what to do, their paths take a turn when they discover the horrifying magnitude of the Sagean’s return to power, the Scree.

Shadow Bound Souls continues the steampunk saga with a sequel that takes the plot to greater depths, while expanding upon the immersive world; with a ending that hurtles the series toward the coming World War. 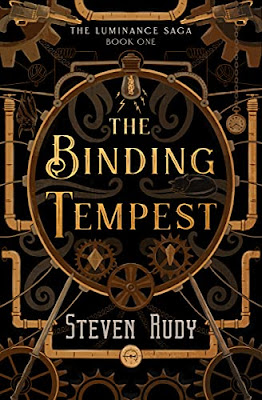 Haven’t started the series yet? Grab Book 1 THE BINDING TEMPEST in  Hardcover, Paperback, or read for FREE with a Kindle Unlimited membership!

The three of them walked into town on foot and for the longest time, Learon didn’t see anyone around. It was beginning to feel like a ghost town. A few shapes were seen inside houses, but Learon didn’t stop until they reached the town center.

In the open green space, about fifty townspeople lingered aimlessly. Learon almost went past them to the Inn until the truth of what they were doing hit him. He realized they weren’t moving. The sight of them standing still chilled him to his bones.

“What’s wrong with them?” Tali whispered.

“I don’t know. I tried talking to a few of them and none responded. Sometimes they’ll look at you, but that’s it,” Wade said.

Learon surveyed the area and waved for the others to follow, “Come on, I need to find Rose.”

He ran over to the Inn and up the porch steps. There were others inside all in the same static state, and a foul smell of mildew and excrement made it hard to breathe. In the kitchen, the smell was worse. There he found Jema, the cook. She was standing in the darkened room with a knife in her hand. The ghosted look in her eyes was frightening. They were glossy and yellowing.

“Jema. Jema, where’s Rose?” Learon said, but there was no response. Jema blinked and seemed to be breathing, but she didn’t answer. He stepped closer to her.

Learon tried again, this time touching Jema on the arm, “Jema, are you . . .”

At his touch, she took a step forward. The sudden movement startled Tali, and she backed into some empty egg crates. Learon moved away to give Jema space. Jema slowly strode to the counter and began to chop some rotten meat on the board. Jema’s movements were almost mechanical and she did it all without registering their presence in the room.

Praise for book 1, THE BINDING TEMPEST:

“This start of a saga is difficult to put down as the readers follow Ellaria Moonstone as she fights to protect all knowledge!”– Sara Anderson, Reedsy Discovery

“The Binding Tempest is highly recommended reading for steampunk fantasy and sci-fi fans interested in an epic work evolving on the scale of Lord of the Rings.”– D. Donovan, Senior Reviewer, Midwest Book Review 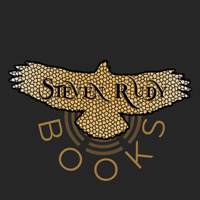 After attending the University of Colorado at Boulder, where Steven studied architecture, philosophy and writing. He has worked in the field of architecture for 20 years designing houses, commercial buildings and working on historic preservation projects across Colorado. He is passionate about sci-fi, fantasy, the Denver Broncos, architecture, and Bob Dylan. The Binding Tempest was Steven’s first novel and he’s thrilled to bring book 2, Shadow Bound Souls into the world.

2 winners will win a SHADOW BOUND SOULS bundle including signed paperbacks, bookmarks, a tote bag, & maps, US Only.