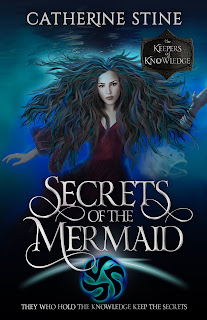 Meet Indigo Rain, a beautiful but lonely mermaid. Regretful of a dark past, she has vowed to remain alone and research ancient merfolk tribes. When she unearths a seabed burial site that even she cannot identify, she shares this with a High Council merfolk historian. But she keeps one shocking secret to herself.
Bay Finley is the flirty, dashing Royal merfolk Keeper assigned to teach Indigo on Pyreshore, a glamoured city of supernaturals tasked with keeping invaluable knowledge alive. Indigo thinks Bay is a know-it-all. She also thinks he’s dangerously handsome. He’s engaged to Abigail Torrent, a Royal, unlike Indigo, but he’s spending time with Indigo in the lab…
Indigo has three quests: Uncover the mystery of the burial tablet, resist falling in love, and never, ever reveal her biggest secret, even to the Keepers.
Some secrets heal, some kill. Other secrets change life as we know it.
10 books, 10 authors, 10 keepers, 1 shared world. Read in any order!
Amazon

They plunged downward. Indigo felt the transformative rush as her legs changed to a single tailfin, and her hips and below became a sheen of golden scales. She breathed in water and wriggled her way downward. As she did, she stole peeks at Bay. His merman patterns, like ruddy tribal tattoos, emerged along his jawline, down his muscled arms and on both sides of his lean torso. His scales, a rusty gold, matched the patterns on his skin, and glittered brightly against the darker waters like the sea-glass she so loved. His chest and abs seemed to swell and flex at the same time with the strength of a Poseidon, the grace of a marathon swimmer, the glory of a merman Royal in his prime. She forced herself to look away, and to concentrate on seeking out the tablets, whether they were the nano-synth ones, more of the type in that hidden burial chamber, or another type of artifact altogether.

They swam a good way around the outer perimeter, and found nothing of note except for a shattered belt-pack, most likely from the mining accident. She left it there. A little farther on Bay found a cracked human skull. Indigo was sure this was also from a miner, fatally injured in the blast.

She and Bay dug a plot and buried the thing, after she argued that it would be a dishonor to the human dead to ferry it to Pyreshore. “I witnessed that accident,” she explained to him. “There’s nothing more to learn from a human miner’s cracked skull. We’re here for the merfolk.”

He agreed. Halfway around the next perimeter, Bay found another synth plaque, half buried in a whorl of sand and shattered shells. He gingerly slid it in his pack. They gave each other the thumbs up and carried on. For another hour, they worked their way around the crest until they reached the chasm itself. The sight made Indigo shudder. It wasn’t that there was anything visually horrific about the opening, with its piles of sand mixed with shell and coral shards. It was its energy—pulling them toward it as if subterranean demons were sucking them in, famished enough to gulp them down whole. As if this gaping wound was the dark force of what humans called Hell—an eternal, cursed tunnel lined with sticky, deadly evil.

Bay tread water near its edge. Trepidation was etched on his face.

“What if… we dove down and explored this damn hellhole together?”

So he connected it with hell too. He must feel the force, luring them both in. “You sure, Bay? Only a week ago I hauled you up, half dead, from this site. You were hooked up to all kinds of wires in the hospital, remember?”

“I’ll never forget.” Their eyes met in a question, followed by a resolve.

Something else was on Indigo’s mind. She realized, as she undulated closer to the chasm, that she had harbored her own plans to head back as soon as she gathered the courage, to explore the hidden alcove inside the wall of the burial chamber where she’d found the orb.

The orb… what was it exactly? Why did it have its own tiny room? Why was the wall there like a mollusk that grew and shrank? How was it connected to the supposed merfolk coffins? Or was it pure coincidence they existed side by side? She didn’t want to lie to Bay anymore. But she wasn’t ready to spill her guts about the orb’s existence with him either. There were still too many questions.

“So, are we doing this?” He nodded toward the abyss.

“Yeah, we’re doing this. But of one of us gets badly mauled, or worse, the other will haul both of our tailfins up and out of there. And if you see the phantom fish or hear screams in languages you don’t understand you’ll tell me. You won’t just chalk it up to volcanic pressure. Agree?”

“Okay, sure. I’ll keep an open mind. Let’s head down together. As allies.” With this, he held out his hand.

She took it. His palm gripping hers was electric, and they thundered down in a flurry of bubbles.

Catherine Stine is a USA Today bestselling author of paranormal, urban and historical fantasy with romance. Witch of the Wild Beasts won a second prize in the Romance Writers of America’s Sheila Contest. Other novels have earned Indie Notable awards and New York Public Library Best Books for Teens. She lives in New York State and grew up in Philadelphia. Before writing novels, she was a painter and fabric designer. She’s a visual author when it comes to scenes, and sees writing as painting with words. She loves edgy thrills, perhaps because her dad read Edgar Allen Poe tales to her as a child. Catherine loves spending time with her beagle Benny, writing about supernatural creatures, gardening and meeting readers at book fests. 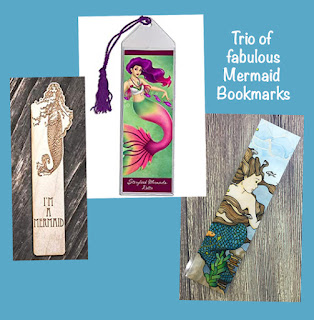 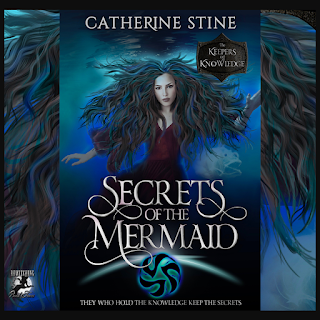 2 Replies to “Spotlight & Excerpt: Secrets of the Mermaid + Giveaway”