Deep in an impenetrable swamp, lies the Sanctuary. Abandoned there as a child, Theobard has lived a quiet life among the Silent Brotherhood, a monastic sect that never speaks. The arrival of Dellia, a beautiful golden-eyed girl with a secret, will change everything. Her secret will expose Theobard’s true nature, and that of the Sanctuary, pulling apart the only world he has ever known, leaving nothing the same.

After a long break from writing, I wrote what I thought was going to be a short story but ended up being a novella. In that story Theobard, the protagonist of Sanctuary, was one of the secondary characters. I was unhappy with how that story turned out but couldn’t stop thinking about Theobard and how he came to be the way he was. I was fascinated by the challenge of telling a story where the bulk of the characters use sign language and the idea of how sometimes you meet people in life who open the world to you – whether you want them to or not.

I started writing this book with the notion that it would be romantic and was surprised when my first readers saw it more as a mystery or horror book. I think I learned that sometimes stories have a mind of their own and the good ones are willing to break your heart even as you write them.

How complicated it is to use sign language in pre-modern times at night. It’s really hard to hold a candle and put your hand in the light for others to see – let alone sign words that require two hands.

I think everyone has a sanctuary in their life – a place they feel safe and fulfilled – but sometimes that sanctuary can change out from under us. What was once a place you longed to be in can suddenly be unrecognizable. I think the title is about those places and what you do when that  shift happens.

To the best of my knowledge they are not. But you never know what’s rumbling around in your brain.

At first I didn’t, I just wanted a kind of romantic adventure story. By the end, however, it became clear to me that if there is a lesson or moral it’s that everyone needs to be free to be themselves but that freedom seldom comes without a price.

The final chapter. I often worry about endings but I was so happy with this one I could hardly believe I wrote it. I’ve read that final chapter perhaps more than any other part of the book and  it still moves me to this day.

The Silent Brothers. Having characters that don’t/can’t/won’t use their voices makes dialogue tricky.

Write more stories. I have some that are completed and looking for a home and others that are partially done. I can’t wait to put more of them out into the world. 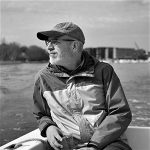 Michael J. Stiehl has had a lifelong passion for fiction, in particular horror, comics, adventure and science fiction, and is thrilled to finally be writing some of his own. Michael lives in the Chicago suburbs with his wife, two kids and his very silly poodle Jack. When not writing fiction, Michael spends his time riding bikes, camping, reading books, obsessively listening to music and playing D&D with his friends. In short, he hasn’t changed a bit since junior high.