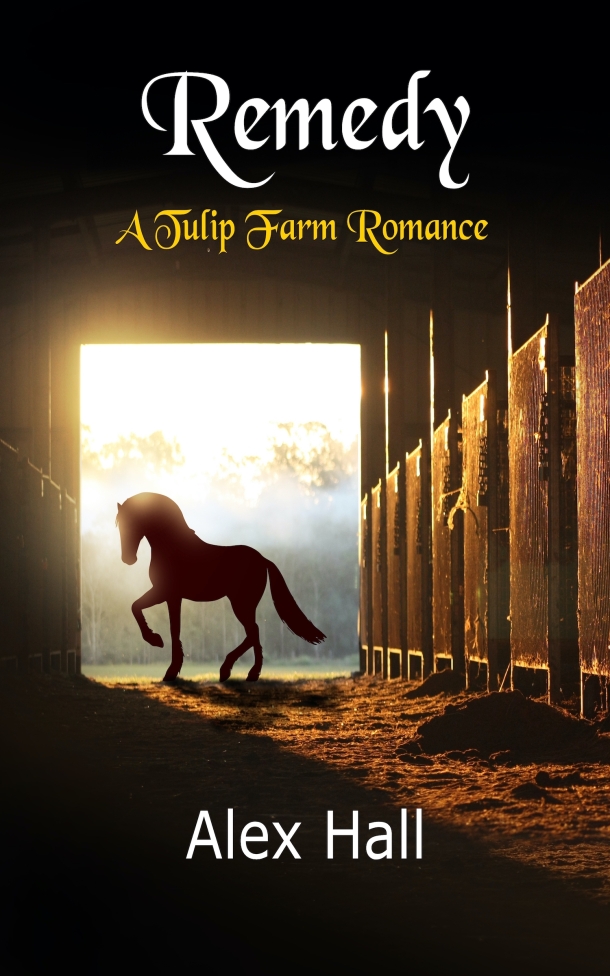 Themes: Acceptance of change in circumstances, rehab to recovery

It is a standalone story and also book one of a series. It does not end on a cliffhanger.

Reed helps Peter realize that there is life and love after a life and career-changing accident.

At just 28, Peter is one of the youngest athletes ever to secure a spot on Team USA’s Show Jumping roster for the Paris Summer Olympics. With the support a large, equestrian-centric family behind him Peter’s a shoo-in to win individual gold—

—until a freak on-course accident badly injures Peter and the talented mare he’d been riding. Dreams of success in Paris quickly coming apart, he holes up at the family complex, Tulip Farm, to rehab and re-assess. His parents and three siblings try to keep his spirits up, but it’s hard to focus on the future when by night he’s plagued by reoccurring headaches and by day he can barely walk without pain.

Reed Androku has recently chosen to follow their passion: holistic equine rehabilitation. Tulip Farm – an immaculate facility run by the famous McAuley-Griffin clan – seems the perfect place to chase that dream, and when the family unexpectedly opens up Barn A to boarders, Reed jumps at the opportunity. They’ll happily take advantage of roomy stalls, heated arena, and state-of-the-art footing even if it means putting up with Peter Griffin, the family’s youngest son and ex-Olympic hopeful.

Peter needs healing, and a reason to hope. Reed’s got a knack for rehab and a soft-heart for hard cases, but they also have a dangerous secret. Fate throws Peter and Reed together, sparking a passion that could turn into something deeper, but first they must weather Peter’s recovery, the McAuley-Griffin family’s obsessive need to meddle, and Reed’s violent past.

As far as Peter was concerned, the only thing of worth he could ever be was an Olympic show jumper.

He’d been born into it, after all. His mum was a McAuley. County Kildare stock, and for as far back as anyone bothered to keep track, the County Kildare McAuleys had been horse people. Peter’s maternal grandfather and granduncle had made their fortunes breeding and racing thoroughbreds in Ireland. Peter’s mum, Aine McAuley, was a track rat grown into Ireland’s most decorated eventing star. And Peter’s dad, though no County Kildare McAuley, had plenty of horse chops of his own. Gabe Griffin had ridden to team gold for Great Britain in Barcelona, the same Olympics Aine had tried—and failed by the slimmest margin—to bring home an individual medal for Ireland.

She always said she’d regretted the miss for exactly forty-five seconds, the time it had taken to dismount after her stadium round, toss her reins at her cousin and stand-in groom, Finley, and glance past her disappointed family at the young man with the salt-and-pepper hair watching from the shadows of the ingate.

That young man was Peter’s da. He’d come over from the Olympic stables to get a glimpse of the McAuley winning machine at work and instead found himself captured by a pair of wide violet eyes over a petulant, spoiled mouth. Gabe had already heard more than a few things about Aine McAuley. Her easy way with horses, her exacting eye for breed lines. Her tendency to collect suitors like candy and toss them away again, half-consumed. And her—possibly obsessive—drive for excellence in all things.

“Bad luck,” he’d famously dared say with typical British aplomb and specific Gabe Griffin bluntness as those furious violet eyes attempted to flay him from a distance for the sin of witnessing a McAuley nonperformance. “But not entirely your fault. He’s off in the right hind, don’t you know, just the barest whisper but enough to send him flat over the last three and cost you the time faults.” Hands in his pockets, he shrugged when all three McAuleys glared at him in disbelief. “Like I said, just the barest whisper, easy for even the best of us to miss, but I saw it from up in the risers. If I were you, I’d have him looked at immediately.”

“What the hell do you know about it?” Aine’s father and coach, Shane, had blustered. Gabe was quite clearly wearing the track jacket of a British Olympian and a color-coded tag on a lanyard around his neck that meant he had unrestricted access to the Olympic barns, but that wasn’t necessarily a point in his favor. Quite the opposite, in fact. “And why in God’s name should we listen to the competition?”

Gabe shrugged again. He hadn’t reached so far in life by backing down. “For the horse’s sake, I imagine. He’s a brave fellow, and bold. No matter the gruff show you put on for the papers, Shane McAuley, we each of us know the animal’s welfare comes first, and a bit of healthy competition won’t change that.”

“The Olympics are hardly ‘a bit of healthy competition,’ Mr. Griffin,” Aine said softly, her accent rolling pleasantly with the music of Ireland. “But you’re not wrong. Oh, stop snarling, Da. I felt it when we landed fence six. A stinger, and after that he couldn’t balance up. Poor Ross.” She stroked the chestnut gelding’s neck. The horse, still blowing hard, sniffed hopefully at her gloved hand in search of a sugar cube. “Let’s hope it’s not lasting.” She tugged a sugar cube from her breeches pocket, smiled a challenge at Gabe. “Right hind, you say? Well. Why don’t you come back with me to the warm-up ring and we’ll look him over.”

They were married less than a year later, and just like any sport horse carefully bred to succeed, Peter’s fate—and that of his three older siblings—was sealed.

“Beautiful day for a ride,” Kate Griffin told Peter cheerfully, smoothing long dark hair back from her forehead and securing it into a high ponytail with an elastic slipped from her wrist.

It was the same thing his older sister said before every first round, the same thing she’d said when they were children and he’d ridden his pony, Cricket, for the first time at Devon while she stood at the ingate, all pigtails and wide eyes and quiet confidence, and he’d won the class blue. It didn’t matter whether they were indoors or out, whether he was showing first thing in the a.m. or after dark in the p.m., whether the sun was shining, or they were in the middle of a blizzard. Horse people were a superstitious sort and the Irish a superstitious people, which meant Kate and Peter Griffin were superstitious twice over and just fine with it.

“Remember,” Kate continued as she stepped sideways to avoid being trampled by Annie’s eager, dancing trot. “Six and Seven come up quick, balance her back. And Five will take some leg, what with the Liverpool, and we know how she feels about water in the indoor, poor Annie. She’s not alone. Other people are having trouble.”

Sarah Remy/Alex Hall is a nonbinary, animal-loving, proud gamer Geek. Their work can be found in a variety of cool places, including HarperVoyager, EDGE and NineStar Press.

an ebook copy plus a $50 Amazon Gift Card.