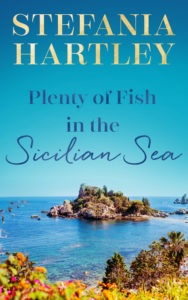 Plenty of Fish in the Sicilian Sea
by Stefania Hartley

Sicilian marine biologist Serena Ingotta has never understood men, but when she uncovers a mafia factory polluting the sea, it only adds to the things that confuse her.

Twenty-four-year-old Sicilian scientist Serena Ingotta has always misunderstood men, from her workaholic anti-mafia judge father to the Catholic seminarian she’s hopelessly in love with. Interning in a marine biology lab alongside her irritating colleague Enrico, she discovers an illegal polluting factory that is possibly connected with the mafia.

When it turns out that their boss is going to cover up the story, she publicly denounces him at a science conference and gets expelled from the lab. Alone and ostracized, Serena’s attempts to find love and expose the factory seem to be failing epically until she finally realizes that everything she has been searching for was just under her nose.

Reader advisory: This book contains instances of minors with firearms.

Serena jangled the lab keys inside her bag and smiled. The cheerful clink told her that, even without a salary, a job description or a coat peg, she belonged there. The sound echoed in the silent corridor. There was no tapping of wooden soles, no irritated voices, no whispered gossip at that time in the morning. There was just her, the pickled coelacanths and the embalmed, startled pufferfish to greet her through the glass cabinets.

She stuck the key into the lab door and tried to turn it, but it was already unlocked. Strange… I’m usually the first in. As she opened the door, she found the tall green shutters gaping open and a gust of wind slammed the windows shut with a tinkling of glass.

“Enrico?” He was perched on his stool, hunched over the wooden workbench with his grubby lab coat unbuttoned, as attractive as the Hunchback of Notre Dame. He straightened, turned toward her and blinked as if he were only just waking up. He usually turned up around ten o’clock. “How come you’re here so early?”

“Just to spook you. No, not really. I just suddenly thought, Shit, we have to finish our research by the end of the week, and I freaked out. Are you freaked out too?”

“A bit. Mostly about your sudden interest in our work. I thought I’d never get any help from you.”

He smiled. “I’m here to the rescue, baby.” He thrust a fist in the air, and Serena groaned inwardly. He was even wearing a Superman T-shirt.

She took off her motorbike helmet and put it down on the floor under the coat pegs. “Maybe we’ll get our own pegs after the conference.”

He shook his head. Coat pegs were for staff, not unpaid interns. “I wouldn’t hold my breath, Sery. We’re out of filter paper and we can’t order more until next year’s funding arrives. I don’t think either of us is getting a job here anytime soon.”

“Hold on. If we’re out of filter paper, what are you using for filtering?” she asked, pointing to the funnel dripping a red liquid into a conical flask on their workbench.

She clutched her head. “You can’t do that! No wonder our results—”

“Just joking.” He grinned, winking. “I’ve cut the discs in half so we have enough. If you pour carefully, they do the job just fine.”

“Please, don’t make a joke like that again. Not now.” They only had until Friday to persuade their boss to submit their research to the upcoming Marine Biology Conference. If they presented their research at the conference, they could put it on their CVs and maybe they’d get a research bursary or—if dreams ever came true—a permanent research position. Two years of unpaid work in Schettino’s lab would not have been in vain. “Right. Let’s get to work.”

By the time Giovanna and Titti arrived after dropping their kids off at school, Serena and Enrico had dissected the fish samples, isolated the gill tissues and filtered the extracts. Giovanna and Titti were research associates—with coat pegs, name badges and monthly salaries—but they were too nice for Serena to wish that they accidentally cut their own heads off while dissecting a fish so that she could have their jobs.

“Cornetti to see us through today,” Giovanna announced, putting down a parcel wrapped with the paper from the café downstairs on a nearby bench. The heavenly buttery scent of the Italian croissants temporarily flushed the smell of the fish samples from the room. Yes, Giovanna is definitely too lovely to hate.

“Shall we have a break?” Enrico suggested hopefully.

“I want to see the spectrophotometer’s results first, but you can,” Serena said.

Enrico hesitated but picked up a cuvette with fish juice instead of a cornetto with custard and walked over to the spectrophotometer in the far corner of the room. Enrico called out the machine’s readings and Serena entered them into her laptop.

“How are things going here?” Professor Schettino suddenly appeared behind them. The boss never arrived before eleven o’clock. He must be early because of the conference deadline.

“We’re getting together the last results,” Enrico said confidently.

“Great. I want to see all your results by lunchtime.”

After that deadline was issued, the cornetti weren’t mentioned anymore.

Just before midday, Schettino shouted from his office, “Enrico, Serena, are you done?”

They looked at each other. “Almost!” Enrico called back.

It was a very early ‘lunchtime’ for Italy. They entered the last few results into their table and clicked on the button that would create a curve of best fit. But what came out was not a curve by any standard.

“I don’t think our results are wrong. The repeats are very close to each other.”

“Then why does our data make no sense?”

“It does make sense. Negative results disprove the hypothesis.”

Enrico twisted his mouth. “Negative results aren’t exciting enough to be presented at a conference.”

“Schettino will agree that science doesn’t have to be sensational. Come… Let’s show him.” She got up with her laptop and marched to Schettino’s office-cave. Enrico followed her. “Here are our results,” she announced, putting her laptop down on their boss’ desk, which was scattered with printouts crossed through and scribbled on in red pen. Enrico stopped on the threshold and leaned against the door jamb.

Schettino adjusted his reading glasses, put down the red pen and looked intently at the graph. “Ah,” he said, pushing his wheelie chair back and dropping his glasses to look intently at Serena.

Serena waited for a more comprehensive comment, possibly with some indication of his appreciation.

“So, what’s your conclusion?” he asked, shrugging.

“That there’s no correlation between heavy metal concentration in fish and distance from the shore.”

Enrico stepped into the room. “We’ve calibrated the instruments before every batch of measurements, we’ve repeated each reading at least three times and…we’ve worn gloves.”

“Uhm”—Schettino pursed his lips—“perhaps you need to plot against depth instead of distance from the shore.”

“Why? What’s wrong with our results as they are?” This was not how she had imagined the conversation would go.

“Not impressive enough to go to a conference. The selection committee won’t give you even a five-minute slot to present it. Nobody is interested in you having an idea and proving that it was wrong, Serena. I don’t care what you plot your results against, so long as you find a correlation of some sort. Otherwise, I won’t submit your work to the conference. It’s as simple as that.” He stood up, which made him a lot taller than her—but not Enrico.

“But the submission deadline is on Friday,” Enrico protested.

“You don’t have to come to this conference. There’ll be many others.”

But we’ve worked for two years with the promise of being allowed to submit to this conference.

“We’ll turn the research around by Friday.” 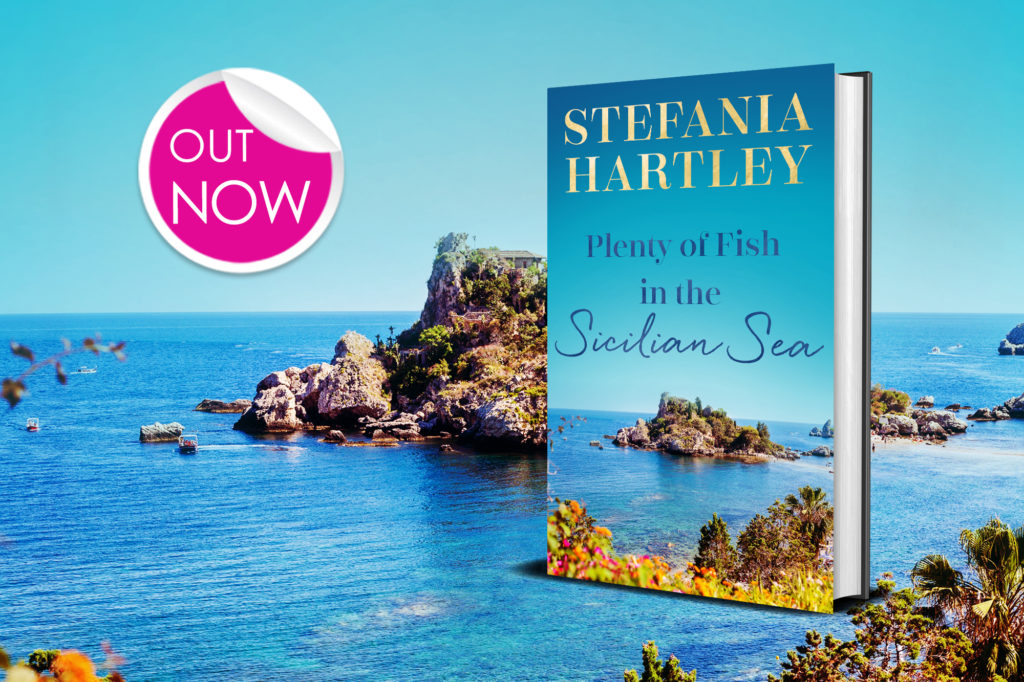 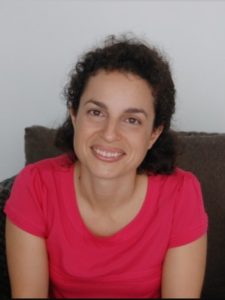 Stefania Hartley, also known as The Sicilian Mama, was born in Sicily and immediately started growing, but not very much. She left her sunny island after falling head over heels in love with an Englishman, and she’s lived all over the world with him and their three children.

Having finally learnt English, she enjoyed it so much that she started writing stories and nobody has been able to stop her since. She loves to write about hot and sunny places like her native Sicily, and she especially likes it when people fall in love.

Her short stories have been longlisted, commended and won prizes. Plenty of Fish in the Sicilian Sea is her second novel, after Sun, Stars and Limoncello.

You can find out more about Stefania on her website, and on the Sicilian Mama’s Blog. You can also listen to Stefania’s podcast.

Stefania Hartley’s Plenty of Fish in the Sicilian Sea

STEFANIA HARTLEY IS GIVING AWAY THIS FABULOUS PRIZE TO ONE LUCKY WINNER. ENTER HERE FOR YOUR CHANCE TO WIN A LOVELY GIFT PACKAGE AND GRAB YOUR FREE STEFANIA HARTLEY ROMANCE BOOK! Notice: This competition ends on 26th January 2021 at 5pm GMT. Competition hosted by Totally Entwined Group.

One Reply to “Release Blitz & Excerpt: Plenty of Fish in the Sicilian Sea + Giveaway”