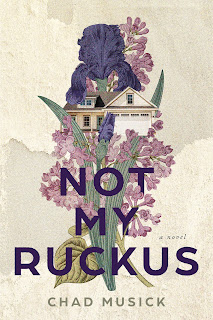 Clare knows only bad girls shoot people and set fires. But being good won’t save her best friend.

Folks know 14-year-old Clare isn’t normal, even for a tomboy. She runs too much, talks too little, carries a gun too often, and holds a grudge forever. Only her papa’s job at the bank keeps gossip quiet. It’s unwise to risk the cold anger of the man who knows everyone’s secrets.

Clare feels prepared for everything from fire, to flood, to what her momma calls demon attacks. When her neighbor Esther kisses her, though, Clare has no ready script. Maybe she could write one, given time she doesn’t have. At the moment of that first kiss, Esther’s mom is bleeding out from a gunshot wound.

Clare can read the signs everyone else is determined to ignore. A murder was only the beginning. Esther needs protection, whether she wants it or not, and Clare won’t abandon her friend just because things are hard.

Maybe one day she’ll be forgiven for doing what’s needed.

Esther kissed me once for free, when we were both just girls. We were sitting watching the Rangers play baseball—not the Olympics, because it was the summer of 1980 and Carter was choosing to hide in a boycott rather than fight the communists who were running it—and Gunnar went to the fridge to get a fresh bottle of beer.

“Daddy,” Esther called, “can we have some sandwiches?”

He grunted back, and we heard his breathing punctuated by the clatter of the silverware drawer and the rattle of the jam jar.

Esther swayed back and forth, making fun of how Gunnar had staggered as he walked to the kitchen.

“Usually I get his beers, or mom does, but you’re company.” She winked at me.

I wasn’t allowed at Esther’s house often, even though we should have been best friends all along. We were both 14, we lived across the street from each other, and we would go to high school together the next year, just like we’d always gone to school together. But her family wasn’t our kind of people.

On the day Esther kissed me, though, momma’d had a vision of her and Esther’s mom going shopping together.

When momma had a vision, you didn’t stand in the way, and so she had dropped me off and taken Esther’s mom in the big car to go shopping.

Gunnar came back with a paper plate of peanut butter and strawberry jam sandwiches for us, and a pair of beers for himself. He eased back down into his lounger with the creak of springs and scritch of leather on denim, and opened a beer. He let it dangle from his fingers, and it wasn’t long before he was snoring.

Esther crept up on him and eased the bottle from him.

She held it out, for me to drink. This was one of the reasons they weren’t our kind of people, and I shook my head no at her.

“I’ll scream,” she whispered, and held it out again. “It’s gross. He’s already drank off it.”

Esther pushed her finger into the neck of the bottle and wiped it, just a little pop of sound when her finger came out, then wiped the outside of the top. She made me take the bottle.

I drank some, of course I did. Not much, just a swallow, so she wouldn’t scream, and then I gave it back to her.

She finished the bottle, and then laid it down beneath Gunnar’s fingertips. There hadn’t been much left anyway, I told myself.

We sat on the floor in the Texas summer heat and leaned our backs against the new couch. The plastic on the seats got sticky and uncomfortable when the sun shone on it, but the unglazed terra cotta floor was cool, and her hand was warm when she put it in mine.

She was swaying again, and when she swayed my way, her head rested on my shoulder and stayed there.

Good. It was good to have a friend. Even if next year she didn’t join me in softball and running and volleyball and all the other sports I’d been denied in junior high because there were only intramurals, I’d still have a friend. Frank didn’t let me play with him anymore, because he was older and it wasn’t “cool” to have your little sister around, especially if she was better at baseball than you. He could get the bat on the ball sometimes, smash it high in the air with the powerful arms that he’d once used to hoist me on his wide shoulders, but he lacked control. Just about every hit was a foul or a pop fly. Even when he hit it well, he was never ready to run.

I’ve always been ready to run.

Esther didn’t care about baseball, even if she’d watch it on the tv with me. At school, I’d used to watch her when she double- dutched with the other girls, who called me boy like it was a curse word and stopped their ropes when I came around.

“I have a secret,” she said, without lifting her head.
“I want to tell it to you.” 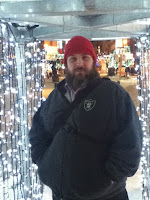 Chad Musick grew up in Utah, California, Washington, Texas, and (most of all) Alaska. He fell in love in California and then moved with his family to Japan, where he’s found happiness. He earned a PhD in Mathematical Science but loves art and science equally.
Despite a tendency for electronic devices to burst into flame after Chad handles them, he persists in working in various technical and technology-related roles.
Chad makes no secret of being epileptic, autistic, and arthritic, facts that inform how he approaches both science and the arts.
Twitter
Website
Goodreads 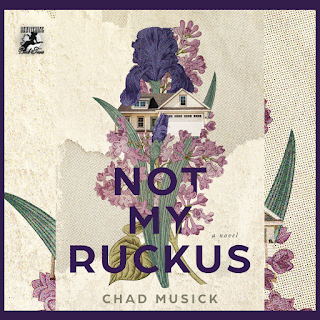 One Reply to “Spotlight & Excerpt: Not My Ruckus, by Chad Musick”