I am thrilled to be hosting a spot on the MICHAEL ANGELO & THE STONE MISTRESS by Steve Moretti Blog Tour hosted by Rockstar Book Tours. Check out my post and make sure to enter the giveaway! 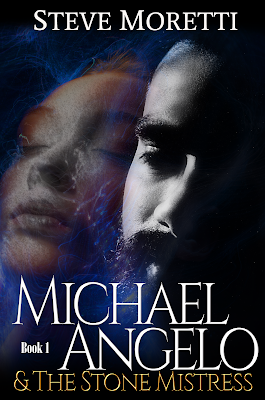 Michelangelo believed every block of marble held a statue
inside it.

Yet he knew that without deep personal sacrifice, it would remain forever hidden. Five hundred years later, New York fashion photographer Michael Angelo Thomas falls in love with every woman who poses before his camera. He is driven to reveal what lies beneath the surface, stripping away the barrier between viewer and subject.

After the death of an aspiring young model that his photographs propel to
international fame, he leaves New York for an assignment in Florence to
photograph the world’s leading fashion models.

Michael fell in love with every woman he photographed.
Unless he exposed his heart, he couldn’t get close enough to what lay deepest inside them. If he didn’t make himself vulnerable, his images only reflected what lay on the surface, missing the connection he needed. Once he felt himself swept away by his subject, sparks flying with each release of the shutter, and every lightning bolt flash, they bonded for hours in the studio.
And many more in the darkroom with Michael and the celluloid history of the session.
The results spoke for themselves. Some of the women revealed so completely in his images wanted to be with him, to touch the man who so deeply touched them. He made it a rule to never sleep with the women he photographed.
But he was never very good at following rules.
“Ginger, you’re already here,” he said, making a fist and holding it to his heart. “But…” he hesitated, moving his face close to hers, their lips almost touching.
“But, what, Michael?”
Even in this light, her features outlined softly with the faint brush of the red safelight, he could see her sadness and openness, her strength and her weakness. Her face was a canvas he could explore a long time. Ginger had a gift unlike the dozens and dozens of models he’d photographed. She didn’t need to strike a pose. Everything was there on the surface, waiting to be captured. Her gift was not knowing she had anything to offer, not knowing she was anything special.
Her innocence was intoxicating. “Would you mind if I took a few more pictures of you?” he finally replied.
“Really?” she smiled. “Now?”
“Yes,” he kissed her lips ever so lightly, then flicked on the light. “Come on.”
She followed him out of the darkroom. His mind raced with ideas about how he would light her, what lens to use and a dozen other tiny details about equipment and settings.
Ginger sat at his table, and poured the rest of the champagne into their glasses, then reached down to her purse on the floor. She took out an envelope, opened it and emptied the contents into her hand.
“I just got these,” she said, laying her palm flat, revealing a clutch of small pink pills.
Michael set down the lens he’d taken from his bag. “What are they?”
“It’s ecstasy… in a pill.” Before he could respond, she popped two in her mouth and washed them down with champagne.
She held out her hand, offering him the pills. “Let’s find it tonight.” 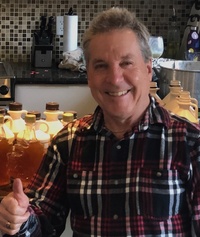 I have always been drawn to passion and creativity in all its forms. I am equally fascinated by the mechanics of the universe and the characters of history. I have a special affection for the power of music which I believe is the universal language of human emotion. My writing journey started in journalism, public relations and advertising then continued into software development. I have been writing novels full-time for a couple of years now and recently completed my first series, Song for a Lost Kingdom. I also co-authored a biography on the life of Pyotr Tchaikovsky, and am currently finishing the first book of a new trilogy called Michael Angelo.

I grew up in London, Ontario (Canada) and also lived in Pompano Beach, Florida as a teenager. I moved to Ottawa and attended Carleton University and now live just south of the city with my wife and our two dogs. I look forward to your feedback. Visit my website stevemoretti.ca for the latest news, or email me at steve@stevemoretti.ca anytime!

Sign up for Steve’s newsletter and get a free eBook!