One man’s lust for power threatens the future of humanity—can a young girl from the outer system stop it all?

Imogen “Chim” Esper is thrust into the center of an interplanetary conflict when her family is torn apart by the cruel and indifferent Kardashev Corporation. Forced to run, along with her robotic best friend, Chim struggles to find her place in a society that is poised for revolutionary transformation.

The Kardashev Corporation dominates all commerce and politics in the solar system. Its megalomaniac CEO, Alton Neal, is hell-bent on transforming society by capturing the full energy output of the sun through the creation of a Dyson Swarm.

Citizens of Earth and the stations throughout the system must band together to protect access to the lifeblood of the system or risk becoming permanently enslaved to the Kardashev Corporation.

Mercury’s Shadow is a thrilling adventure that blends real science, big ideas, grand adventure and high stakes to introduce a new heroine and a deep universe that will leave readers asking for more.

1. Tell us a little about how this story first came to be.
[PJ] I think the book idea started with the concept of what if you had one of these tech billionaires who just kept going and owned more and more of everything, what would that look like? And then the whole universe kind of flowed from that. I wanted it to be a kind of epic space adventure, but I really wanted a main character that my daughters could identify with. So, Chim, the main character is a teen girl who finds herself caught up in this interplanetary conflict pretty much against her will. And she has to navigate that while at the same time navigating a pretty traumatic personal tragedy.

2. What, if anything, did you learn when writing the book?
[PJ] I learned a lot about science and physics as I tried to ground everything based in real science. So I did lots of math to calculate travel times, and ensure that even the stuff that is a bit far out there has some basis in reality.

4. If it’s not a spoiler, what does the title mean?
[PJ] Mercury’s Shadow refers to the Dyson Swarm that Alton Neal (the villain) and the Kardashev Corporation build in the novel (it’s revealed very early). Alton refers to the fact that the tiny planet Mercury “casts a long shadow upon the sun”. He’s referring to the millions of solar collectors that they constructed from the raw materials on Mercury and put into orbit around the sun to capture its energy.

5. Were any of the characters inspired by real people? If so, do they know?
[PJ] Well, Alton Neal, the villain is a kind of melting-pot of popular tech billionaires. You can see shades of Elon Musk or Richard Branson or any of these billionaires who have these grandiose plans to colonize Mars or build space hotels. And the thinking is, ok, what if these guys just kept going and nobody stopped them, where does that end up?

6. Do you consider the book to have a lesson or moral?
[PJ] I think all books have a lesson/moral just implicitly. In this book, I think there’s a big exploration around the kind of society that we want to live in and who should set the agenda for that society. If we’re not careful, it will be set by those with the most wealth, and that isn’t necessarily what’s in the best interest of everyone.

7. What is your favorite part of the book?
[PJ] Well, without spoiling anything, my favourite part of the book is in the middle when Chim discovers both some new abilities with some tech, but at the same time uncovers a new mystery about her own family and past. And this moment, while I think is really powerful, also sets up the rest of the series.

8. Which character was most challenging to create? Why?
[PJ] I think for me, it’s probably Chancellor Okeke. She is a fascinating character who has this really incredible background and personality, but also has an experience and identity that is probably the furthest from my own. That’s part of the fun and challenge of writing though, to discover and explore different viewpoints and characters and I really enjoyed writing her sections.

9. What are your immediate future plans?
[PJ] Finish editing on Book 3! I’m in the home stretch now and it will be exciting to have the conclusion of the series out there in the world so that people can experience the entire journey. After that, I have a bunch of ideas and projects that I want to explore next. 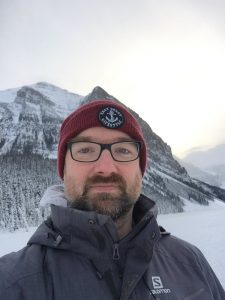 PJ Garcin has been writing stories, music and games for most of his life. He writes from the beautiful east coast of Canada where he has worked extensively in video games and technology for the past 20 years. Picking up a long running writing thread, he recently completed the first book in the Kardashev Cycle — Mercury’s Shadow.

The Kardashev Cycle follows the rise and expansion of the dominant Kardashev Corporation and its near universal control over the solar system. The first book in the series, Mercury’s Shadow, introduces the young Imogen Esper — a resourceful young girl from a mining station in the asteroid belt who finds herself caught up in an interplanetary conflict when her father is injured during a routine maintenance mission. The second book, Chimera’s Prism, continued the adventure in 2021. The final installment, Eternity’s Veil, is due in 2022.

PJ is a regular speaker at technology conferences on topics ranging from interactive narrative to machine learning. He has an undergrad degree in English, Rhetoric and Professional Writing as well as a Master’s degree in Communication.

He worked as Executive Producer in games on titles that sold more than 27 million units in total. He worked on large franchises such as FIFA, Madden, and Guitar Hero while helping to launch successful indie franchises like The Golf Club (now PGA Tour) and Infinite Air. He currently works as Director of Product Management for an open-source-focused SaaS company.